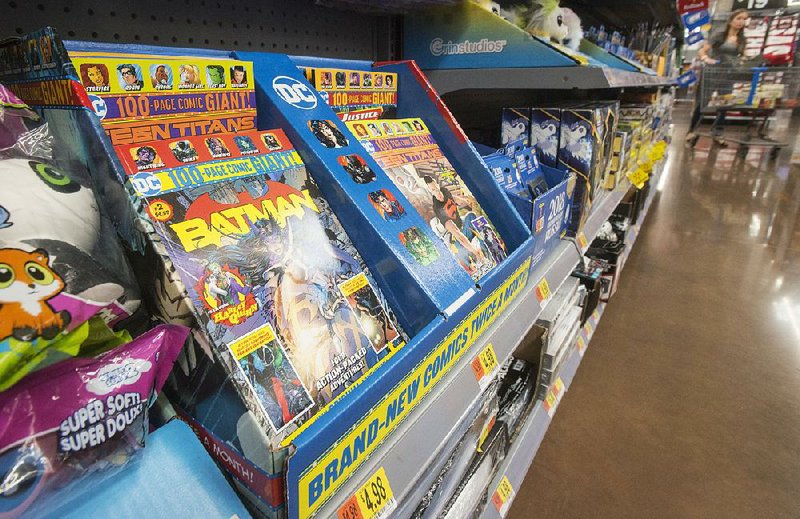 With each edition of DC Giants comic books in Walmart stores selling out faster than a speeding bullet, the publisher already has plans to expand the exclusive line.

Created for Walmart Inc., the 100-page anthologies that debuted in July in 3,000 stores combine original stories with reprinted classics. Each book, which sells for $4.99, features one of four perennial favorite superheroes. Superman Giant and the Justice League of America Giant appear in the first week of each month. The second pair of titles, Batman Giant and Teen Titan Giant, are released two weeks later.

DC Comics publisher Dan DiDio said his company, a subsidiary of DC Entertainment, hopes to eventually get the books in all of Walmart's nearly 5,000 U.S. stores. But all four titles have sold so well in the first two months that DC will publish two special editions and add two more titles early next year.

Then in February, the Flash will join the superhero lineup of regular titles, as well as another character yet to be determined.

"I'm really excited about the program," DiDio said in a recent phone interview from DC's Burbank, Calif., headquarters. Walmart stores are in many communities that don't have a specialty comic book shop, he said, "so it's a great way to get our books into people's hands."

Walmart spokesman Molly Blakeman said the Bentonville retailer's relationship with DC began in 2016, when Walmart began selling three-issue bundles of DC Comics reprints for $5. DiDio adds that these were so successful, it showed him there was "an appetite" for comics at Walmart. "We'd tried this program at other places, and it was not as successful as Walmart," he said.

Deciding to take it a step further, DC developed the idea to mix new material with classic stories to interest both longtime comic book readers as well as more casual fans who knew the DC characters from film, television and other media. DiDio said this packaging of books as a 100-page "giant" had long been a way for DC to introduce new fans to its material, so the Walmart project was an opportunity "to create a new version of something that has been around for 50 years."

Working through a third party, DC pitched the idea to Walmart. Blakeman said the retailer saw a void in the industry, which had mostly shifted to specialty comic book stores, and felt comics would work in a mass-market environment because of the characters' popularity in mainstream entertainment.

"DC characters are universally recognized and have been for generations," Blakeman said in an email. Between movies, TV and video games, she said, "there are more DC superhero fans than ever and we wanted to provide these casual fans access to the source material behind the shows, movies and games they love."

The books currently are not available at Walmart.com, though Blakeman said that may be a possibility in the long run. "Our current priority is to establish the presence of these books in Walmart stores," she said. Book displays are set up at stores that have a counter dedicated to collectibles.

Both Blakeman and DiDio said the books are created with the more casual DC fan in mind, in hopes of creating a new generation of comic book readers. They're also targeted more for younger readers, about 10 to 15 years old, DiDio said.

While he didn't rule out the possibility of future partnerships with other retailers, DiDio said, "we plan to stick with Walmart for the time being. It's been a successful program.

"Internally at Walmart, we have a lot of people really championing for us, so we want to be sure we get this right and take full advantage of this relationship as something that will be a good outlet for us."

Not everyone is happy with DC's foray into the mass-market world of Walmart, however. Some independent comics sellers see the move as a threat to their businesses.

Robert Scott, a comics retailer in San Diego, Calif., founded and maintains the Comic Book Industry Alliance. Started in 1997 as a support forum, the alliance has evolved into a network of about 500 comics creators, distributors, publishers and retailers.

Scott, who owns and runs two comic book stores, said in a phone interview that the alliance sent DC a written complaint when the deal with Walmart was first announced. Members also expressed their opinions on a private Web page where DC can interact with its retailers, he said.

Though he sees much that is problematic about the DC-Walmart partnership, Scott said the biggest problem ultimately is that DC created an exclusive line of stories using some of the top writers in the business.

"It's going to create a need for our customers to go to Walmart to buy the comics they would get in the bookstore if they were available," he said. "Comics readers have a limited budget, and if they spend $5 at Walmart, that's $5 less they'll have to spend on comics here."

Scott said in essence the two companies are shifting sales from the specialty shops, or direct market, to the mass market. He said the benefit for Walmart is to bring more people into its stores, and it helps DC by strengthening the Warner family of products such as movies, clothing, posters and video games sold at Walmart.

The specialty comic book store, however, has two advantages over the big-box stores, Scott said. Those are product knowledge and product diversity.

Most comics are created for readers 16 and older, he said. "I know the new material that's coming up would fall into that age category, so I hope parents will take a good look at what their kids are buying," he said.

At a comic book store, Scott said, employees know what's age-appropriate and can steer youngsters toward that material.

Specialty stores also carry other lines of comics, such as the Marvel titles. "Even a Barnes & Noble won't have the product knowledge or depth of product that a specialty comic-book store would have," Scott said.

Both DC and Walmart declined to respond to Scott's statements. However, DiDio said in his interview that he hoped the venture would help direct-market retailers by introducing new fans to the world of comic books. After reading DC's books for Walmart, he said, these fans will head to specialty shops for more.

"This is a great entry tool for readers to explore our characters," DiDio said. "It's all about building our base even wider."