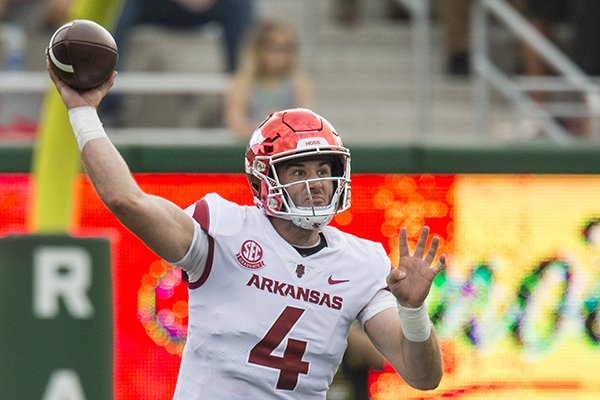 But who is the top quarterback isn't the biggest question today in Razorback Nation. It is what happened to the pass defense that allowed Colorado State to beat Arkansas 34-27 on Saturday night.

Kelley started the second half after the Razorbacks settled for two field goals and one rushing touchdown in the first half, but the defense couldn't slow Colorado State's passing attack, which included a 96-yard touchdown drive to start the fourth quarter to make it 27-24 with 11:07 to play.

The Rams followed that with a 70-yard drive that ended in a field goal and a 27-27 tie with 5:19 left, and at that point the Rams had 248 yards of passing in the second half.

With 2:38 to play, the Rams started at their own 41 -- the Hogs had not had a first down in their last four possessions -- and got 43 yards in the air and ran the last 15 for the game-winning touchdown with just 0:08 to play.

A team needs to score touchdowns when it gets into the red zone, especially against a winless team from the Mountain West Conference. The Hogs got to the CSU 11 and 7, and both times settled for field goals to lead just 13-9 at the half.

The defense lost this one though. Porous doesn't describe what it was while giving up 25 second-half points and 291 yards passing.

On the Hogs' third possession of the game, they became ground and pound. On their first two possessions, they had passed six times and run just once.

Over the next five possessions, they would pass seven times and run -- mostly between the tackles -- 35 times. The results were good but not great. The downside was settling for field goals deep in Rams' territory and having no balance on offense.

Those field goals combined with Devwah Whaley's 3-yard touchdown run that capped a 73-yard drive, of which 71 yards were on the ground.

By the half, the Hogs led the Rams 253-99 on total yardage but just 13-9 on the scoreboard as Wyatt Bryan -- who would become the school's all-time leading scorer Saturday -- was amazing by hitting field goals of 55, 46 and 44 yards, with the first and last coming after two Ty Storey interceptions.

Of the Hogs' 253 first-half yards, 217 were on the ground. Whaley, Rakeem Boyd and Chase Hayden had not been tackled for a loss, but the defense couldn't stop the Rams in the second half.

Storey's two interceptions got Kelley the second-half start, and the first eight plays were more of the same -- the offensive line opening holes -- and the Hogs rolling to the Rams' 25. Then Kelley dropped back and with plenty of time found La'Michael Pettway in the end zone for the touchdown, and the 91-yard drive was a solid A.

The Rams fired back, but a sack by Armon Watts caused a fumble and McTelvin Agim recovered.

On first down from his own 36, Kelley found T.J. Hammonds on the the left sideline. Hammonds ran like the Rams were armed with knives, but they weren't armed with enough speed. Hammonds' touchdown made it 27-9 with 7:28 to play in the third quarter.

The balanced attack was too much for the Rams at the time, although a 45-yard punt return by Deon Stewart to the Colorado State 29 ended in a costly missed field goal. The home team drove 70 yards in seven plays for its first touchdown, and after a two-point conversion trailed 27-17.

It was all Colorado State after that.

Print Headline: QB identity one of many worries for Hogs