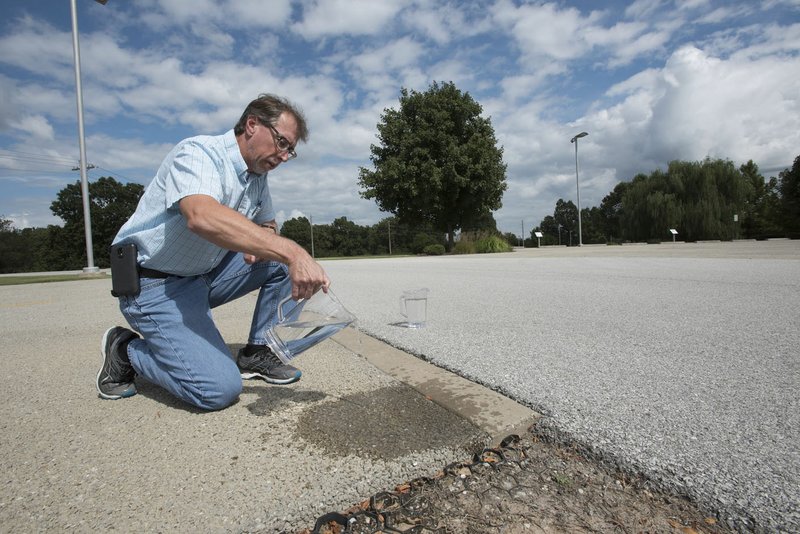 NWA Democrat-Gazette/J.T. WAMPLER Bill HagenBurger, Beaver Water District plant engineer, pours water Thursday to demonstrate how water seeps through the district's pervious surface of their green parking lot in Lowell. Green parking lots help mitigate pollution in stormwater, reduce flooding and cut down on the amount of heat off of hard surfaces, according to the National Parking Association.

FAYETTEVILLE -- Environmentally friendly parking lots reduce the amount of sediment flowing to streams, which keeps pollutants out of drinking water, and drops the heat emanating from swaths of pavement, local and national experts say.

Anyone who looks around Northwest Arkansas might notice trees popping out of planters or water flowing through rocks in areas that resemble gardens more than spaces for cars.

The Environmental Protection Agency has developed a green parking lot resource guide. It can be found at bit.ly/epagreenparking. Naturally Resilient Communities, a partnership of planners, engineers and conservationists who advise communities on nature-based solutions for multiple issues, also has a webpage on the concept. Read it at bit.ly/nrcgreenparking.

Green parking lots can vary in scale. Fayetteville has at least two such projects in development, with numerous others scattered throughout the city. Water can soak through the gravel in the gridded parking area at Lake Atalanta in Rogers. Parking at the Eighth Street market district in Bentonville features native plants and bioswales with no curbs around them to catch water. The Beaver Water District's administration center in Lowell boasts grass pavers allowing water to seep into the ground, as it would without a parking lot there.

The Beaver Watershed Alliance, whose mission is to maintain high-quality drinking water at Beaver Lake and protect its watershed, received a $500,000 federal grant late last year it has put toward building green parking lots and other forms of low-impact development.

Paved parking lots serve as a prime offender when it comes to polluting water and causing flooding, said Becky Roark, outreach director for the alliance.

"When you have a lot impervious surface -- surfaces that water can't move through -- you're altering the hydrology of our landscape," she said. "So when we put in these parking lots, the water can't soak into the ground the way it used to. It has to run off somewhere."

Green parking lots typically feature some type of permeable surface. Permeable can refer to a porous surface, such as gravel or turf, or a lot made with pervious material, such as bricks with spaces in between.

They usually have plants and native grass placed prominently throughout a site, with conduits underground or on the surface allowing water to flow to a drainage basin, usually a bioswale. A bioswale is like a pond with vegetation that collects runoff and filters debris and sediment.

Sometimes a lot has an overflow area made of grass pavers that can support vehicles and still grow vegetation, such as at the Beaver Water District's lot. The entire lot has about 100 spaces and was built nearly a decade ago, said Bill HagenBurger, plant engineer.

The U.S. Green Building Council in 2010 awarded the Beaver Water District's administration center a Leadership in Energy and Environmental Design gold certification for energy use, lighting, water, material use and other sustainable strategies.

The district's porous parking lot with drainage into bioswales slows runoff significantly, reducing erosion of ditches and cutting down sediment, HagenBurger said. The lot has had some aggregate wear in an area with the most water flow, but that's about it after nearly a decade of use, he said.

"It's on the high-traffic areas," HagenBurger said. "Overall, we haven't done a lot of maintenance on it."

Fayetteville tries to incorporate low-impact development when feasible for all of its new projects, and the planning staff encourages developers to do the same, said Peter Nierengarten, sustainability director for the city.

There's nothing in the city's code dictating development of green parking lots, but the city has adopted an energy action plan listing them as a way to achieve goals in reducing stream pollution and mitigating heat from flat surfaces.

The city also is in the middle of a study to identify the worst flooding spots and assess a possible fee on water bills to help fix them. One solution might be to encourage landowners to retrofit lots to get credits to reduce the stormwater fee, said Chris Brown, city engineer.

The University of Arkansas' Cooperative Extension Service awarded the city a $20,000 grant to install pervious pavers under eight spaces with drainage inlets at Lot 55 on West Avenue, in front of Hammontree's. Work should begin in the next few weeks, said Justin Clay, city parking manager.

A plan also is under way to build a green parking lot next year at Kessler Mountain Regional Park, which will add about 50 spaces. At least 20 spaces will have permeable material, and the lot will feature at least one bioswale with native plants and trees. Total budget is $300,000, with the city putting in $140,000. The rest comes from the federal grant given to the Beaver Watershed Alliance.

The city has several other examples: Gulley Park's lot near Old Wire Road has green features; bioswales are mixed with the parking on Block Avenue; Gordon Long Park has pervious pavers; and the lot across from City Hall has a median cut out with a rock swale.

Development of green parking lots is a fairly new endeavor, but city maintenance crews are getting used to the upkeep associated with them, said Byron Humphry, parks maintenance supervisor.

"It's a good thing that those bioswales are capturing sediment, because sediment is one of the largest pollutants in our water system," he said. "Capturing those sediments is great, but you just need to plan for cleaning it out periodically."

Making parking lots environmentally friendly comes at a certain cost, but it's well worth the investment, said Jason Glei with the National Parking Association, a trade group specializing in parking industry research.

Green lots may cost more to build, but the maintenance associated with them usually pales in comparison to that of a traditional concrete or asphalt lot, Glei said. Asphalt needs regular repaving, and concrete routinely breaks apart from rainwater and vehicle use, he said.

More and more green parking lots have popped up in the last few years nationally, Glei said. Material is getting less expensive, and developers and cities are recognizing the benefits of sustainable, low-impact development, he said.

It's possible green lots could become the norm, Glei said.

"As far as the parking industry, a lot of it is going to flow based off of what makes the most sense from a financial aspect," he said. "If the financial sense is there, it'll follow."