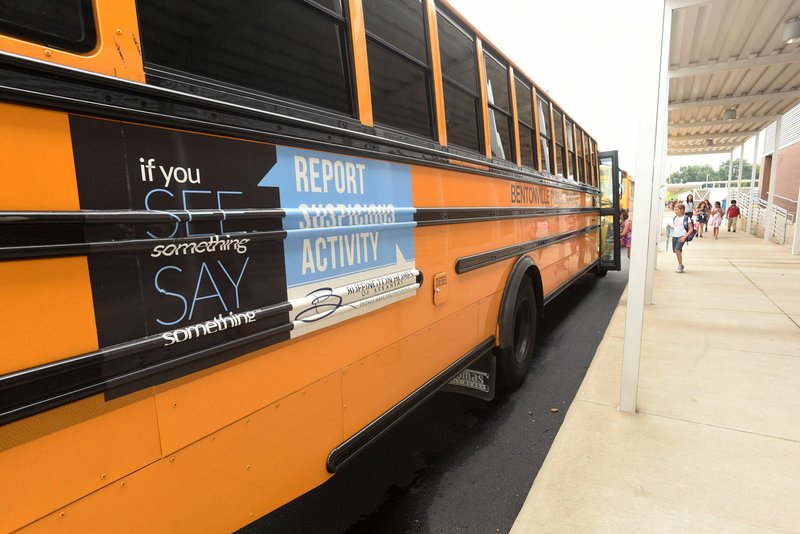 NWA Democrat-Gazette/FLIP PUTTHOFF A Bentonville school bus displays an "If you see something, say something," message Wednesday at Willowbrook Elementary School. The School Board approved putting signs on its buses in April, making Bentonville not only the largest, but also one of the first school districts in the state to do so.

BENTONVILLE -- That school bus rolling down the street each day may be carrying more than children. It may carry a message.

Signs attached to the rear quarter panels of some school buses read, "If you see something, say something." The slogan is borrowed from the federal Department of Homeland Security to promote awareness of suspicious activity in and around schools.

If you see something …

The Bentonville School District adopted the “If you see something, say something” campaign last year as a way to combat illicit activity on its campuses. The district encourages students and parents to report any information that might help keep schools safe by calling an anonymous tip line at (479) 367-8080. Putting the message on buses “allows us to further remind the community we all have a part to play in the safety of our communities and schools,” said Leslee Wright, communications director.

The School Board approved putting signs on its buses in April, making Bentonville not only the largest, but also one of the first school districts in the state to do so.

Each sign -- which is actually a decal -- contains the logo of a business or organization sponsoring the message. The cost to sponsor one bus with both sides branded is $2,500 for one school year, with 75 percent of the net revenue going to the district's transportation department.

Crosswalk Marketing, a Springdale company that specializes in bus signs, handles all aspects of the sign program and collects the remainder of the revenue for its services.

"We decided to call it 'school bus messaging,' because we're not really advertising," said Tony Cristee, a managing partner of Crosswalk.

The signs began appearing on Bentonville buses last month. Ten of the 120 buses have signs. That amounts to about $18,750 in revenue for the district for this school year.

District officials said earlier this year they expect the signs to bring the district $175,000 in the first year and as much as $300,000 during year five.

Sponsors include Buffington Homes; Crowder College in Neosho, Mo.; Farmers Insurance; Northwest Arkansas Community College; and Sam's Club. Others have said they want to be sponsors, but haven't written checks yet, Cristee said.

Northwest Arkansas Community College is sponsoring signs on one bus. It's a chance for the college to stay in front of the community, said Lisa Anderson, the college's executive director of planning, effectiveness and public relations.

"We want to be visible in the community and let people know that we're here," she said.

Advertising on Bentonville school buses also makes sense because Bentonville is one of the college's largest target markets, she said. Out of Bentonville High School's 1,060 graduates from the class of 2017, 167 of them -- nearly 16 percent -- attended the college last fall, according to the college's annual fact book.

Crosswalk did not begin contacting businesses about the sponsorship opportunities until mid-July, Cristee said. He hopes as people get used to seeing the signs, more sponsors will get involved.

A message from Crosswalk, distributed via email last month by the Greater Bentonville Area Chamber of Commerce, asked businesses to consider becoming a sign sponsor.

"We are asking for your corporate sponsorship to help provide safe and reliable transportation to children while promoting a positive message of safety for our kids while they are in school and also highlight your business brand," the message says.

Chris DeWitt, the district's transportation director, said he likes the signs. He hasn't heard any feedback from the public, he said.

"The bus drivers have been positive," DeWitt said. "They thought it was going to look like NASCAR, but, the truth is, it's a small sign on the back of the bus with a public service announcement."

Arkansas became the 10th state in the nation to allow school bus advertising in 2015 when legislation sponsored by state Rep. Dan Douglas, R-Bentonville, was signed into law. Douglas got the idea from Michael Poore, the Bentonville district's superintendent at the time and now the Little Rock School District's superintendent. The legislation stipulated all revenue generated from school bus ads be used for transportation purposes only.

Bentonville school administrators explored the idea in 2016, but dropped it after board members expressed concern about what types of advertisements would be permitted, distractions to drivers and the commercialization of education.

Administrators revisited the idea this year and put out a request for proposals. Five firms submitted proposals. Crosswalk Marketing pitched its vision of signs promoting a positive district campaign message sponsored by an area business or organization rather than signs advertising goods and services.

District officials said they intend to spend the sign revenue on technology related to school bus safety -- particularly security cameras -- and additional training for drivers on how to support students with special needs and handle extreme student behaviors.

Cristee said he hopes Bentonville's venture into school bus messaging will entice other districts to try it.

Springdale and Rogers school district administrators haven't had any serious discussion about it, according to communications directors for the districts.

Bentonville is the second district Crosswalk has worked with on bus signs. Booneville, a district of about 1,200 students southeast of Fort Smith, put signs on five of its buses last year, an initiative of former superintendent John Parrish.

"We have not done anything with it this year," Goff said. "That's not to say we won't. It's just a transition period."