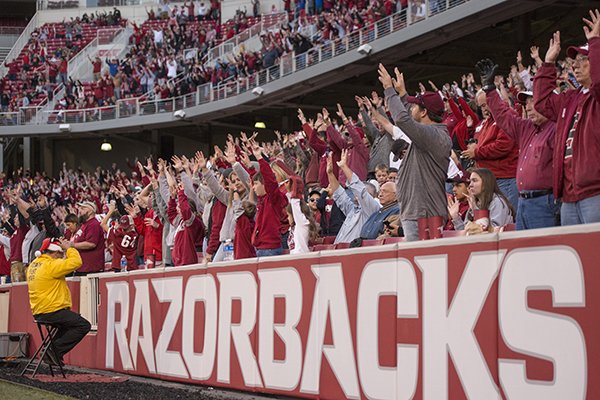 Arkansas fans cheer during a game against Missouri on Friday, Nov. 24, 2017, in Fayetteville.

FAYETTEVILLE -- Announced attendance was more than double the number of tickets actually used for the final three Razorback home football games last year, based on records released by the University of Arkansas, Fayetteville.

Both UA and Arkansas State University keep game-by-game records on tickets scanned, or used, which differ from what an Arkansas State spokesman described as an announced attendance derived based on "industry standards."

Schools playing at college football's highest level routinely announce thousands more people as attending games than those who have a ticket code scanned for entry into campus stadiums, The Wall Street Journal reported this week.

On average, only about 7 out of 10 people announced as attending games had tickets scanned in 2017, according to a Journal review of records provided by 96 public universities with football programs participating in the Football Bowl Subdivision.

At many schools, including UA and Arkansas State University, millions go toward stadium renovation and expansion projects, like the $160 million makeover for Donald W. Reynolds Razorback Stadium that has added more premium seating and increased capacity to 76,000 from 72,000. Today, the stadium hosts its first Razorbacks football game after the renovation.

Yet both UA and Arkansas State University had much lower numbers of tickets scanned or used compared with the announced attendance.

For UA, the announced attendance averaged 67,752 in 2017 at games played in Fayetteville. But the average number of tickets used was 39,216, or about 58 percent of what was announced. The records were released under the state's public disclosure law.

In an email, UA spokesman Kevin Trainor said UA, in tabulating its announced attendance, follows practices "consistent with many universities around the nation."

The announced attendance figure reflects "tickets allotted, non-credentialed personnel, including law enforcement officers and student-athletes, and other credentialed individuals, including members of the media and working personnel," Trainor said.

Trainor did not respond to questions emailed Thursday about how a decrease in tickets used -- as experienced over the course of last season, when the Razorbacks finished with a 4-8 record -- might affect finances.

UA stated that no records existed about the numbers of tickets given away for free. Game-by-game ticket records show total distributed tickets also fall short of the announced attendance.

For example, the Missouri game, the final game of the season, had a total of 60,700 tickets distributed compared with an announced attendance of 64,529. As far as tickets used, the total was 29,470.

Nationally, "no-shows are an increasing problem, but the main cause is scheduling uncertainties and weird game times due to TV," Roger Noll, a professor emeritus of economics at Stanford who studies sports, said in an email.

But at football's highest level, television dollars continue to grow at a rate that washes away concerns about attendance dips, Noll said.

Media-rights revenue to UA athletics from the Southeastern Conference totaled about $29.75 million in fiscal 2017, according to a report this year by University of Arkansas System auditors. A different report submitted by UA to the NCAA listed about $32.3 million in ticket sales for football over the same time period, which would cover the 2016 football season.

"So SEC teams like Arkansas have the revenue to pay off their stadium debt, but that does not vitiate the fact that stadiums may prove to be too big and the in-stadium experience may be diminished by empty seats," Noll said.

At Arkansas State, the announced home attendance averaged 23,908 in 2017 at Centennial Bank Stadium, which has an estimated capacity of 30,382.

A spokesman said incomplete data resulted from some malfunctioning scanners at two home games. Including those two games, the average number of ticket scans was 9,126, or about 38 percent of the average home attendance for the entire season.

If those games are excluded, ticket scans averaged 10,960, or about 42 percent of an announced attendance average of 25,916 for games against the University of Arkansas at Pine Bluff, Coastal Carolina and Troy.

But Arkansas State spokesman Jerry Scott said the scan totals do not accurately reflect in-person attendance, noting that students, who attend games for free, are not issued tickets.

Because of malfunctions and "user error," as well as "inconsistencies," the scanner number is "unreliable," Scott said.

Arkansas State also released totals on seats sold. The average for the 2017 season was 19,355, or about 81 percent of the announced attendance.

Scott said the difference in scanned tickets compared with announced attendance was not a factor in moving forward with stadium renovations, which have been described as costing $29 million to be paid for with private funds.

"The premium seating area included as part of the renovations was designed to provide the opportunity for a better fan experience while generating additional revenue," Scott said.

Last year, Arkansas State University football ticket revenue totaled $1,008,558 in a season with five games in Jonesboro after a canceled game that was to be played with the University of Miami, which cited concerns about a hurricane forecast in Florida in not making the trip.

John Roleson, 47, said he's a lifelong Razorbacks fan who regularly drives about 4½ hours from Paragould in northeast Arkansas to attend games in Fayetteville.

Roleson said he'll sometimes have others attend when he can't make it. But when his family of five travels to games, he said spending takes place not just at the game but throughout the weekend.

Football start times for many games are not set in advance of the season, and that uncertainty affects fans who must make travel plans, he said.

"I think that would deter quite a few people" who would otherwise attend, Roleson said.

He said he had no problem with announcing tickets sold rather than in-person attendance.

Another fan, Scott Dicus, who travels from Memphis, in an email also said game times affect his attendance, though he said he either sells or gives away season tickets he cannot use.

Dicus said factors in his missing games are "driving distance plus the fact that game times are typically not announced early enough in the season to make adequate travel plans."

Dicus said that "if actual attendance is known, then that is what should be reported in the box score."