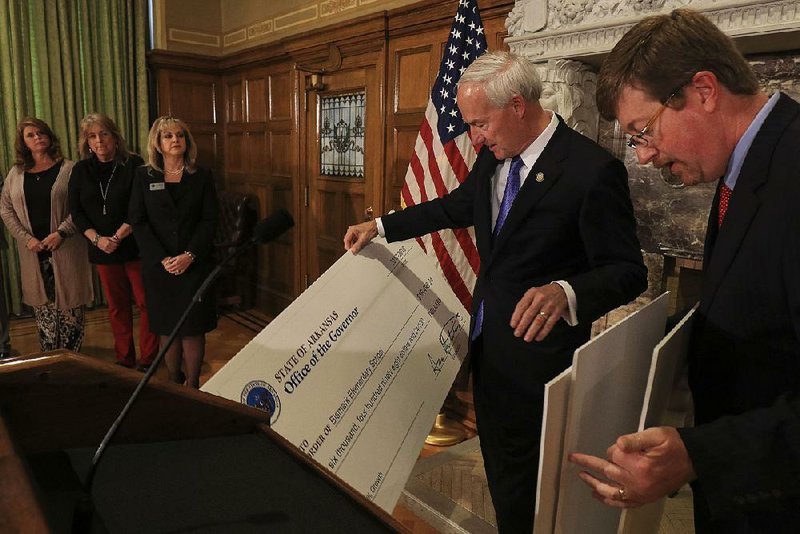 Almost $7 million is going to 175 of Arkansas' more than 1,000 schools for their best-in-state results on the spring 2018 ACT Aspire exams that are given in third-through-10th grades.

Gov. Asa Hutchinson and state Education Commissioner Johnny Key on Monday announced the schools that will be the latest recipients of the statutorily authorized financial rewards. At a state Capitol news conference, the two highlighted in particular the Bismarck School District where all three campuses -- elementary, middle and high school -- achieved awards.

"I am proud of the leadership of the educators," Hutchinson said in Monday's announcement. "I am thankful for the support of the parents and communities, which is vital for this level of success. And I applaud the students who have worked so hard and earned their way into the top 10 percent."

The reward money can be used for faculty and staff bonuses, educational equipment and materials, or for employment of people to help with improving or maintaining student achievement at a campus.

Each school that is named a reward recipient must form a committee made up of the principal, a faculty-elected teacher representative and a parent representative, to decide how the money will be spent for their school.

Bryant High School and Cabot High schools will receive the largest single awards. Bryant High is in line for $133,568.52 and Cabot High is to receive $104,217.16. The rewards to both schools are the result of being among the top 6 percent to 10 percent of schools in terms of academic growth/graduation rates.

"We applaud our students and schools for this great achievement," Cabot Superintendent Tony Thurman said. "This is a tremendous acknowledgement to all their hard work and dedication. None of this would be possible without our outstanding staff and administrators. The key to success comes down to the amazing educators we have standing in front of our students each and every day."

Cabot schools are repeat recipients, Thurman said, noting that in the past the district has used the money for purchasing additional technology, educational equipment, and materials.

Bismarck School District's three schools received four awards totaling $103,537.76. The Bismarck Elementary school was one of more than 25 schools in the state to receive two awards -- one each for achievement and for academic gains.

Key said the school district -- where all campuses recently received state letter grades of A -- did not always perform so consistently at a high level.

"They had an A, they had a B, they had a C. But what they did was what we are asking all of our school districts to do," Key said. "That's take the information and set goals, and say, 'We are going to get better, we are going to get better for our students'. Over the last several years you have seen [Bismarck] rise and now they are performing among the highest levels in the state."

Key cited the district for its "great spirit" and for its efforts to have teachers work together -- planning lessons and tracking student achievement -- in professional learning communities. He also noted the district's reliance on community partners, including the Dawson Education Cooperative and chamber of commerce.

Bismarck Superintendent Susan Kissire welcomed the rewards, telling the crowd in the governor's conference room -- including a sizable number of Bismarck students and adults -- that the school district lives its motto: "Every student, every day."

She said much of the money is likely to go to teachers in the rural district that has been unable to add to its salary schedule in a number of years.

"We know that we are truly creating not just learners but our future leaders," Kissire said.

Students Karigan Beckwith and Ross Whitley spoke in praise of the district.

"I go to each of my classes and am instructed by teachers who see me as so much than just another test score," Beckwith, a senior, said. "They treat me like a member of the family, a future world changer, a person who matters."

Elsewhere in the state, the Bentonville School District schools will receive a 14 awards in the different categories totaling $748,022.