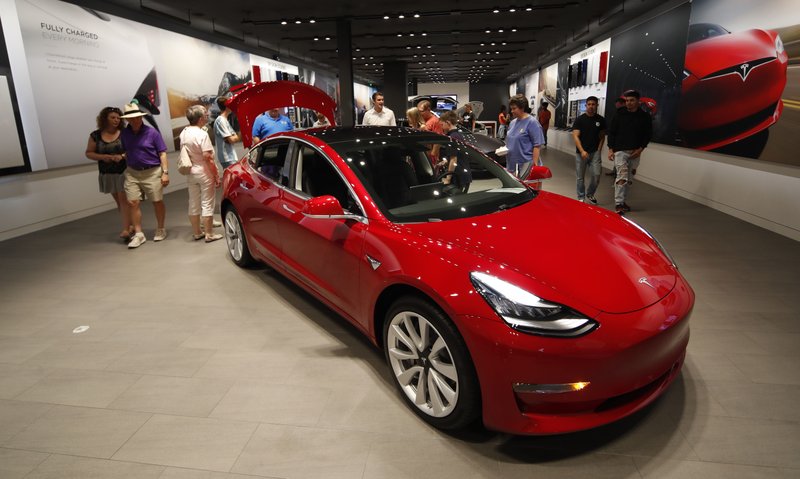 In this July 6, 2018, file photo prospective customers confer with sales associates as a Model 3 sits on display in a Tesla showroom in the Cherry Creek Mall in Denver. Tesla Inc. reports earnings on Wednesday, Oct. 24. (AP Photo/David Zalubowski, File)

NASHVILLE, Tenn. -- FedEx has announced it will add 7,100 seasonal positions in Memphis and Nashville, Tenn., to help with deliveries during this year's holiday season.

According to a news release Tuesday, FedEx will add 55,000 seasonal positions across the country. The company plans to hire more than 4,300 at its Nashville facility and 2,800 at its Memphis facility.

The company is looking specifically to fill package-handler positions.

FedEx officials said they anticipate a record volume this year. Additionally, FedEx said it will run six- and seven-day ground operations during the holiday season. The six-day operations will continue year-round.

SAN FRANCISCO -- Tesla Motors delivered on CEO Elon Musk's promise to make money during its latest quarter after fulfilling his pledge to boost production of its first electric car designed for the mass market.

The company earned $311.5 million during the three months ending in September, swinging from a loss of $619 million at the same time last year. It's only the third time that Tesla has posted a quarterly profit in its eight-year history as a public company.

A big jump in Tesla's output of its mass-market Model 3 car powered the breakthrough.

Revenue more than doubled from the same period last year, to $6.8 billion. That easily topped analyst estimates, just as the company's profit did. For Tesla, turning a profit was not its only notable achievement in the third quarter. It also stopped burning through its cash. The company generated positive cash flow of $1.4 billion in the third quarter, compared with a negative $301 million at the same time last year.

Tesla ended September with $2.9 billion in cash, up from $2.2 billion in June.

TRENTON, N.J. -- The maker of an expensive cholesterol drug is slashing the list price.

Amgen Inc. said Wednesday that it is immediately cutting the price of Repatha by about 60 percent, from about $14,000 to $5,850 per year.

The move could help boost Amgen's 60 percent share in the U.S. market. The reduction comes after rival companies Sanofi and Regeneron in May slashed what they charge to prescription plans -- but not the list price -- for their similar cholesterol medication, Praluent.

Patients, insurers, politicians and others have expressed criticism about escalating drug prices that are putting medicines out of reach for many people.

Amgen CEO Robert Bradway said the price cut will particularly help Medicare beneficiaries. Many now face out-of-pocket costs of $370 per month. With the price cut, that will drop to $25 to $150 per month, depending on their specific prescription plans.

NASHVILLE, Tenn. -- The famed guitar-maker Gibson is changing its corporate leaders as the company plans to emerge from bankruptcy protection on Nov. 1.

In a news release Tuesday, Nashville-based Gibson Brands Inc. said James Curleigh will become president and chief executive officer. Curleigh previously worked for Levi Strauss & Co. as president of the Levi's brand and as a member of the company's worldwide leadership team.

Outgoing CEO and board Chairman Henry Juszkiewicz will have a one-year consulting contract to help in the transition. He'll have no formal role with Gibson beyond that.

Cannabis short-sellers made more than $450 million in the first two days of the week, cutting nearly a third off their year-to-date losses, according to data from financial analytics firm S3 Partners.

The stocks opened higher Wednesday but gave up much of their early gains. Tilray Inc. rose as much as 5.8 percent at the start of the day but closed with a loss of about 9.5 percent. Aurora Cannabis Inc. lost 5.5 percent, after starting with a gain of 6.9 percent, on its second day on the New York Stock Exchange. Canopy Growth Corp. fell 7.9 percent after rising as much as 3.5 percent earlier in the day.

The weeklong slide has been a boon to short-sellers, who are shelling out huge fees to bet the stocks will fall.

"If the cost to borrow cannabis stocks begins to cheapen in the larger-cap names, we may see more short sellers enter this over-heated sector looking for stock prices to ease back down to more reasonable value-based multiples," Ihor Dusaniwsky, head of research at S3 Partners, wrote in a note published Tuesday.

TOLEDO, Ohio -- A telecommunications company faces a potential $63 million fine for misusing government money meant to help low-income people get phone and Internet service and instead spending it on a yacht and private jet, federal regulators said.

The Federal Communications Commission accused Toledo-based American Broadband and Telecommunications Co. of creating fake accounts by using the identities of dead people and of manipulating the information from existing customers to get government reimbursements.

The funds at issue were from the Lifeline program, which discounts phone and Internet service for about 12.5 million people nationwide.

The FCC said it is trying to crack down on waste, fraud and abuse within the program, which is funded by fees on monthly bills nationwide.

A federal audit of Lifeline released last year couldn't verify the eligibility of 1.2 million people who were signed up under the program. The Government Accountability Office also found that nearly 6,400 dead people had re-enrolled.