AG candidate vows to sue to get U.S. to amend marijuana policy 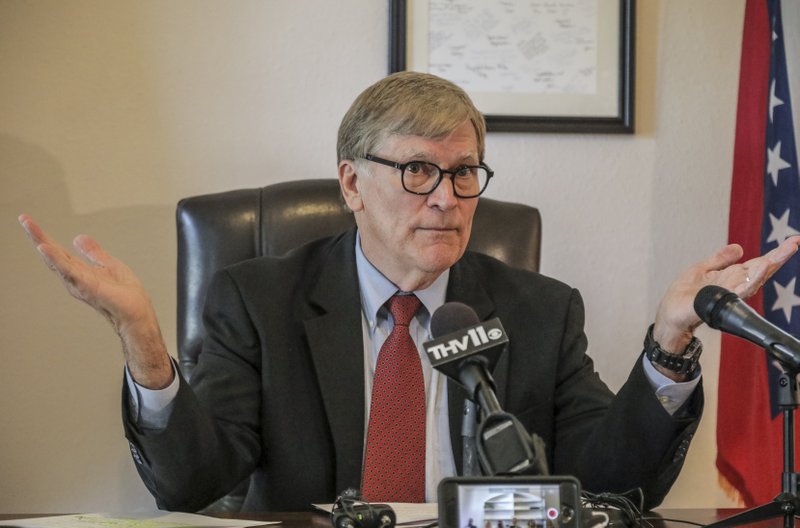 Mike Lee, the Democratic nominee for attorney general, is shown during a press conference at his campaign headquarters in Little Rock Thursday afternoon.

Arkansans who have been prescribed medical marijuana won't be allowed to purchase guns from federally licensed dealers, and the Democratic candidate for attorney general wants that to change.

Mike Lee will announce today that if he is elected, he plans to sue the federal government over its marijuana policy.

Arkansans voted to legalize medical marijuana in 2016 through a constitutional amendment. The rollout of the program has been hampered by repeated problems with licensing growers and sellers. Patients are currently unable to purchase the drug legally.

Marijuana in any form remains a Schedule I drug under federal law, meaning it is not recognized to have any accepted medical use and that users of the drug are barred from purchasing guns from federally licensed firearms dealers.

In a phone interview Wednesday, Lee said his lawsuit would attempt to force the federal government to reschedule marijuana so that it would be treated like other prescription drugs.

"This would allow people who definitely need treatment to alleviate pain. ... It would also allow them to own a firearm," Lee said.

Lee said he also would seek legislation to block state agencies from sharing medical marijuana information with federal authorities, so the information cannot be used to prohibit someone from buying a gun.

David Couch, the architect of the medical marijuana amendment, said he was aware of concerns from potential patients about their gun rights being affected.

However, Couch also predicted that a lawsuit seeking to force the federal government to change its drug scheduling would be a "long shot." He noted that similar efforts failed in other federal circuits.

"If it's rescheduled, then yes, it would work because it would be considered the same as any other drug," Couch said.

Former state Rep. Nate Bell, an independent from Mena, said gun-rights advocates had discussed the effect of the medical marijuana program, but that "everyone's reluctant to touch it."

"Inevitably, a marijuana user will do something bad with a gun," Bell said.

But Lee predicted it was time for change as more states legalize medical marijuana.

"National attitude is evolving," Lee said. "I think we can be successful."

State medical marijuana panel to give public chance to comment