HELENA-WEST HELENA — Elijah Mondy Jr. and his wife, Belinda, were driving home from Walmart early one morning in 2013 when they came upon a man lying in the street in downtown Helena-West Helena.

The couple called police and stopped to wait with the man, who told them he was hurt and needed help. But the man was bait, police said, part of a robbery that led to Elijah Mondy being shot in the chest.

“The people who planned it and the person who shot me were sent to Batesville and were later released back on the street,” Mondy said recently. “The judge [in Batesville] just didn’t know how important the people were in this case because they weren’t from his county.”

Mondy said the man who shot him ended up in trouble again and eventually was killed on the streets of Helena-West Helena in 2015. Two minors involved in Mondy’s shooting were arrested again in 2013, accused of raping a 14-year-old girl.

“This happens again and again in West Helena,” Mondy said. “We have murderers walking the streets because jails let them go.”

Phillips County has been without a jail since 2013, when a state inspection found deficient locks, overflowing drains and other potentially unsafe conditions at the lockup and the county shut it down. Since then, the county has been forced to transfer inmates to other jails or release them, but that will change with the construction of the new Phillips County jail.

“This is a positive statement for our community,” said Clark Hall, county judge of Phillips County. “We will no longer need to pay other Arkansas jails to house the county’s inmates and [will] reduce the transportation costs of ferrying the inmates back and forth across county lines for court hearings.”

Phillips County residents passed a proposal in 2017 that made a countywide 1 percent sales tax permanent, and diverted five-eighths of the revenue generated by the tax from cities and the port authority toward the construction, operation and maintenance of a new 100-bed jail.

The county also will repurpose a facility that is already on the land to serve as a sheriff’s office, courtroom and morgue, among other things.

Initial construction and renovation costs are estimated at $8.8 million. Officials broke ground on the jail last week and hope to have it completed within a couple of years.

The county had proposed tax increases since 2013 to fund construction of a jail, but the efforts had failed until last December, Hall said.

State Rep. Chris Richey, D-Helena-West Helena, said people were uneasy with previous proposals because of what happened at the previous jail.

“Clark Hall did a great job of pulling people together to create a vision and get this done,” Richey said. “It was a very clear plan, and people bought in. It gave people the confidence to vote for it.”

In 2015, officials estimated that Phillips County spent $750,000 a year to transport and house inmates in jails in Wynne, Forrest City and other neighboring towns. Some were transported as far away as Pulaski and Garland counties. In all, about 70 Phillips County inmates were in jails across the state, Hall said.

In addition to the money spent on the transportation and housing of inmates, the number of law enforcement personnel it took to transport inmates meant fewer officers on the streets.

“It’s been a big burden on us financially and on our manpower,” Smith said.

“You add wear and tear on your vehicles, overtime for deputies and gas, and you can see the problem,” Byrd said. “We had three or four vehicles transporting inmates when they could be protecting the county.”

The lack of a jail also made it difficult to retain officers, Smith said.

“People come here and see we don’t have the tools to do the job, then it causes officers to quickly move on,” he said.

Byrd said plans for a new jail have energized the entire area.

“People know things are going to change,” he said. “At some point we will be able to lock people up again and won’t have to worry about a revolving door where we don’t know where they are at. Just knowing we are going to have a justice complex that can house circuit judges and district judges is such a boost.”

The jail is just the start of a master plan for the county, Hall said.

“We are thinking about building a juvenile facility out here, as well, and using some of the land to build an education and drug rehab center,” he said.

Hall said most of Phillips County’s issues stem from drugs, and adding facilities would be a step toward changing that.

“Incarcerating adults is the end result, but if we can correct the issues at a young age and get them on the right path, then we can keep the issue from becoming something larger when they become adults,” he said. “This is a several-year project that can hopefully save lives.” 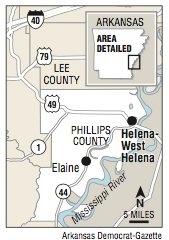