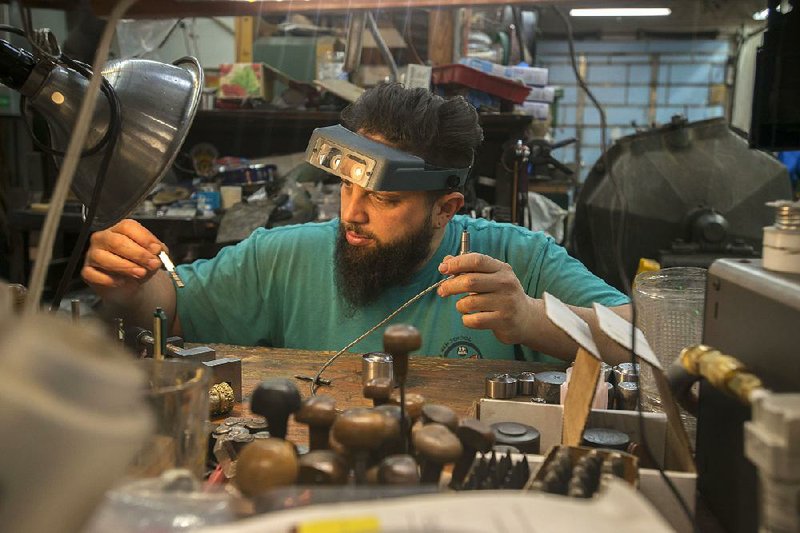 SPRINGDALE -- When Shire Post Mint started a Kickstarter campaign to fund another of its collectible coin sets based on the books that inspired the hit HBO series Game of Thrones, it only took them four hours to meet the $10,000 goal.

Helen Maringer, Shire Post's chief executive officer, credits the company's loyal customer base, a mention in Time magazine, and the continued support of author George R. R. Martin, the creator of the best selling "Song of Ice and Fire" series, for the eager response so far.

Maringer said Martin's loyalty to licensees who struck deals with him before he hit paydirt with HBO has kept several small businesses going when HBO would have rather taken all those rights early on.

In August, Martin explained to a group of fans in San Francisco, that his books had been popular before HBO came knocking, so he already had seven deals with folks who made things like figurines, swords, and coins already inked, some of the contracts long-standing. He said HBO's representatives seemed not to understand that and kept offering him more money for all the secondary and subsidiary rights.

"Will you take another million dollars? No, I cant' give it to you," Martin told the laughing crowd.

Shire Post Mint's founder Tom Maringer reached a deal with Martin for the licensing of the coins in 2003. Martin used the coins at personal appearances, handing them out to early loyalists. Shire Post Mint has been making coins full time since 2010 and today makes about 150 different coins, sold individually or in sets, and produces about 100,000 coins annually. 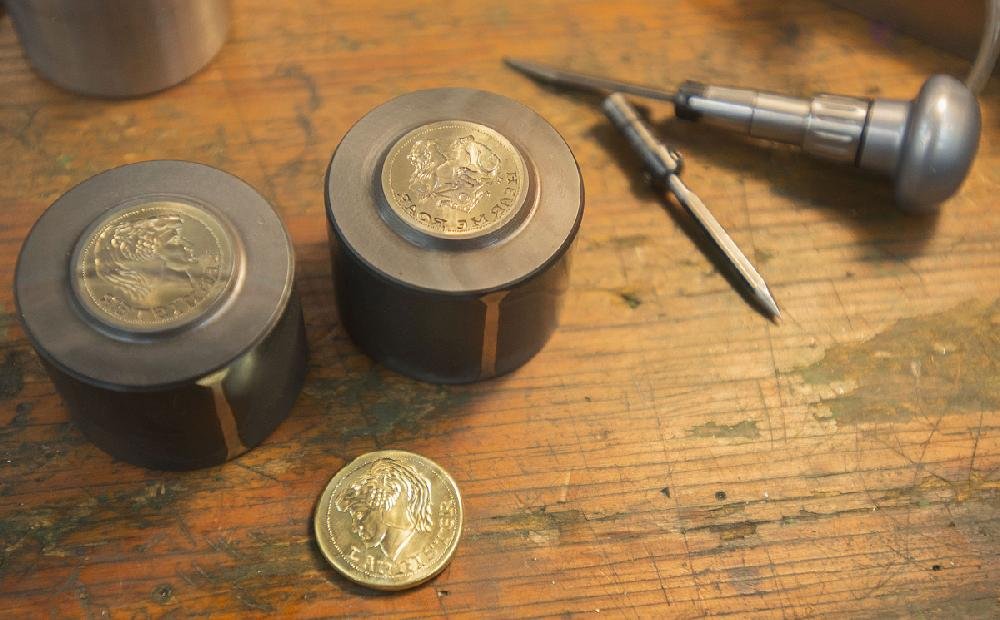 A freshly minted Lannister coin is shown next to its dies at the Shire Post Mint in Springdale. The company has started a Kick- starter campaign to fund a new run of coins based on George R.R. Martin’s Game of Thrones.

In addition to the Game of Thrones coins, Shire Post Mint makes coins under license from several other fantasy franchises, including Robert Jordan's The Wheel of Time, Robert E. Howard's Conan the Barbarian, Patrick Rothfuss' The King Killer Chronicles, and J.R.R. Tolkien's The Lord of the Rings.

The new set of 11 coins from Shire Post Mint features solid metal coins made from brass, bronze, copper, and iron, from the period in history hundreds to thousands of years before the beginning of the fictional Targaryen dynasty in Westeros. Some sets come with maps of various types, including a glowing resin map signed by the Martin himself.

"These coins are from a time before we get to current events," Helen Maringer explained.

As far as incentives go, for a $10 pledge, backers get a single coin while for a commitment of $1,000 or more, backers nab a slew of collectibles, including the resin map signed by Martin, along with two sets of the new coins and all 45 Game of Thrones based coins Shire Post Mint has released so far. As of late last week, there are 11 backers at the top level, with 39 spots remaining. Product delivery is slated for April.

According to Statistica, from its start in 2012 through October, Kickstarter has initiated nearly 420,000 projects with total dollars pledged of $3.9 billion and a success rate of 36.4 percent. Smart watch maker Pebble Time had the most successful Kickstarter campaign raising $20.34 million in 2015, other large fund raisers include the card-game Exploding Kittens which took in $8.8 million and the Bring Back Mystery Science Theater 3000 Reboot with $5.8 million, both in 2015 as well.

Michael Iseman, chief relationship officer for Fayetteville-based Startup Junkie said in response to email questions that raising capital for small businesses through crowd funding like Kickstarter can be highly successful. As opposed to traditional methods, crowdfunding doesn't require businesses to give up any ownership or lose out on future earnings. 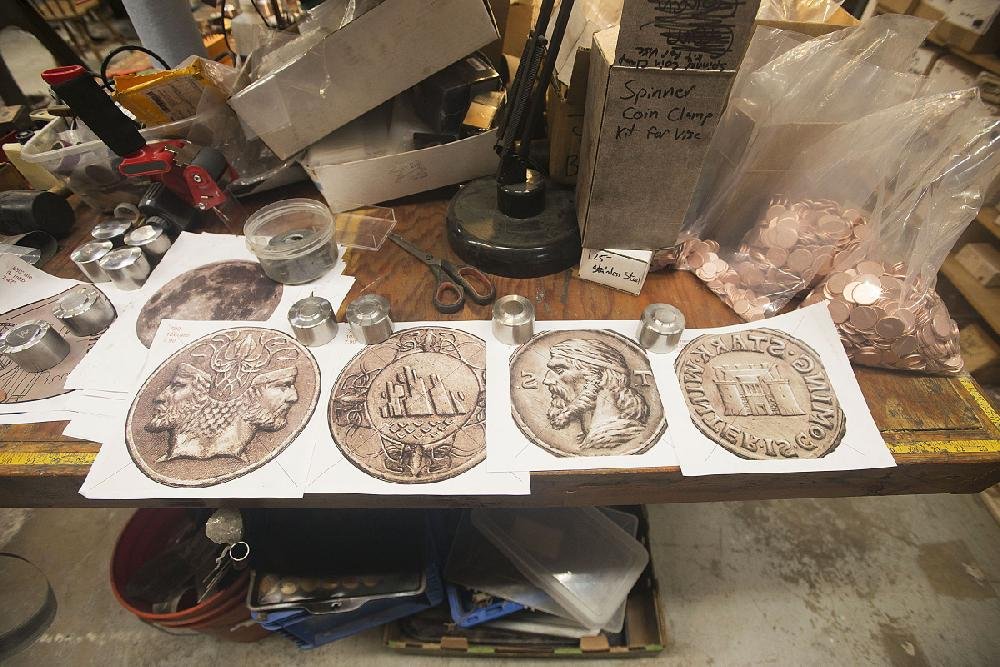 Hand engraved dies created from original artwork are displayed at the Shire Post Mint in Springdale.

"If done well, it is the most viable way for a small business to finance growth because they are using customer money to fund the company rather than traditional sources of finance," he said.

He said making Kickstarter work isn't easy and requires a lot of marketing on the front end as well as an interested and engaged customer base.

"Typically successful campaigns are at least 30 percent of the way funded by the second day," he said. "A strong push at the beginning is how to get more recognition -- so a good launch strategy is important. Don't start building your following the day the campaign launches -- there needs to be a ramp up during the two months before the campaign to create anticipation."

According to the trade group International Licensing Industry Merchandisers' Association, in 2017 entertainment and character licensing accounted for $121.5 billion in retail sales worldwide, or about 45 percent of the $271.6 billion spent on licensed goods. The U.S. and Canadian market is the largest for licensed merchandise and makes up about 58 percent of the total.

In August the Season 7 finale of HBO's Game of Thrones blasted its previous viewership record. The series pulled in 12.1 million viewers, a 36 percent increase over the 8.9 million viewers of the Season 6 finale.

When DVR recordings, streaming and repeat showings are figured in, Season 7 averaged more than 30 million viewers per episode, up 30 percent from the year earlier. At the Emmys in September, Game of Thrones won nine total awards, include Outstanding Drama Series, the most of any HBO series. The show has earned a record 47 awards with ten more than previous record holder Frasier.

HBO has said Game of Thrones will return for a eighth and final season with a six-episode run sometime in 2019. According to various reports there is also at least one Game of Thrones prequel in the works. Martin, in a blog post, said the series will not contain any of the current characters and will be set 10,000 years prior to the happenings in the current series.

Helen Maringer said Martin's work has established a rich history of exciting and compelling tales so the prequels likely will be fertile ground for HBO. She said researching the early days for the mint's most recent coin set was rewarding for her as a fan.

"You just tip-toe into it and then you just fall into the lore," she said.