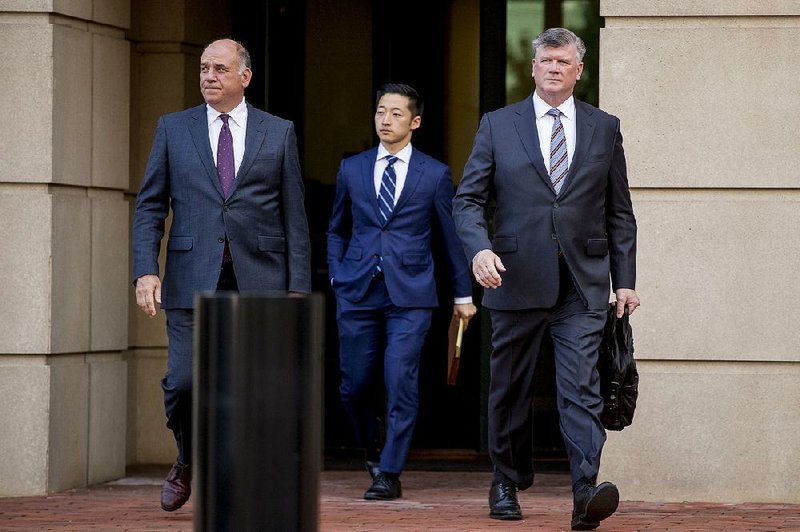 Members of Paul Manafort’s defense team, (from left) Thomas Zehnle, Tim Wang and Kevin Downing leave the federal court Friday after a hearing in the criminal case against their client.

ALEXANDRIA, Va. -- A judge has set a February sentencing date for Paul Manafort, who appeared in court Friday for a post-trial hearing in a wheelchair and green jail jumpsuit.

The hearing in federal court in Alexandria was largely procedural, but provided the first glimpse of President Donald Trump's former campaign chairman since he began cooperating with prosecutors in special counsel Robert Mueller's office. It also resolved the question of whether Manafort would be sentenced before he had finished cooperating.

A federal jury convicted Manafort earlier this year on eight counts of tax and bank fraud. The jury deadlocked on 10 other counts.

The jury found that Manafort hid from the Internal Revenue Service millions of dollars he earned advising Ukrainian politicians. Then, when the Ukrainian money dried up, they found that he defrauded banks on loan applications by lying about his income.

After his convictions, Manafort struck a plea deal on separate charges in the District of Columbia. The plea deal requires him to cooperate with the special counsel's investigation into Russian interference in the 2016 election. Prosecutors had wanted to wait until Manafort's cooperation was complete before proceeding to sentencing, where he could face as many as 10 years on the Virginia charges.

U.S. District Judge T.S. Ellis III, though, expressed concern about waiting too long to schedule a sentencing hearing. The Eastern District of Virginia, known as the Rocket Docket, has a reputation of moving cases along quickly. The more typical procedure in the district is to proceed with sentencing. Then, at a later date, prosecutors can file what's called a Rule 35 motion that would seek a reduced sentence to reward him for any cooperation.

Prosecutors and Manafort's lawyers agreed that would be acceptable, and Ellis set the Feb. 8 sentencing date. Also, as expected, he dismissed the remaining 10 counts against Manafort, again with prosecutors' acquiescence. Ellis' dismissal of the counts does not preclude prosecutors from refiling them at a later date if they choose.

Manafort looked frail and had a foot elevated in a sock as he was wheeled in and out of court wearing a jumpsuit that read "Alexandria Inmate" on the back.

Manafort's lawyer Kevin Downing said his 69-year-old client was dealing with "significant issues" with his health as a result of his incarceration but declined to elaborate.

Manafort, whose penchant for expensive suits came into focus during his trial earlier this year, had requested that he be allowed to appear in court in civilian clothes, but Ellis denied the request, saying Manafort should be treated like any other inmate.

The documents were admitted into evidence during Manafort's trial and several portions were read aloud, but Mueller's office had withheld them.