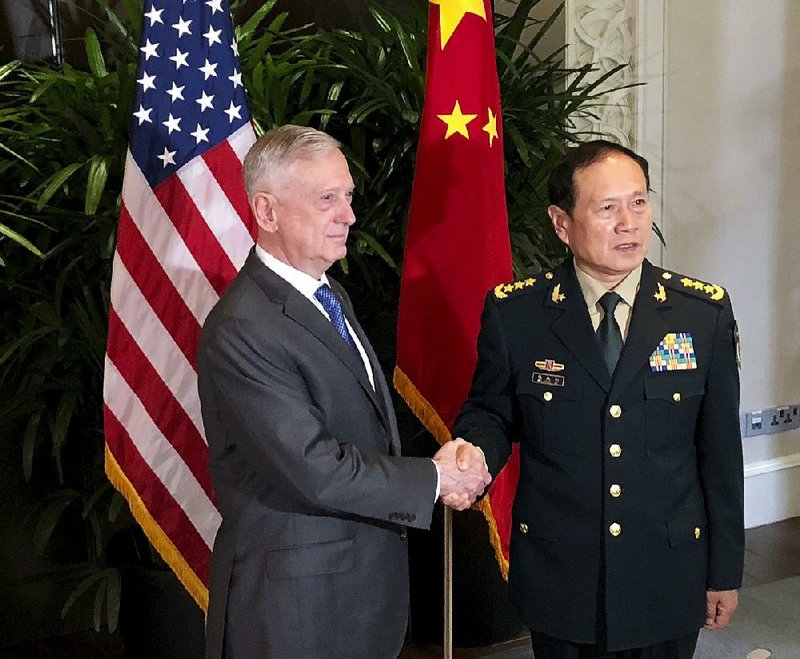 SINGAPORE -- U.S. officials say they sense that relations with the Chinese military, after a rocky few months, are stabilizing, although face-to-face talks between their respective defense chiefs Thursday produced no new agreements.

U.S. Defense Secretary James Mattis met for nearly 90 minutes, 30 minutes longer than scheduled, on the sidelines of an Asian security conference with his Chinese counterpart, Gen. Wei Fenghe. A participant, Randall Schriver, the Pentagon's top official for Asia-Pacific affairs, said Mattis described the talks as "straightforward and candid" and asserted that high-level talks are especially valuable during times of tension.

Schriver said the discussions covered numerous issues but focused especially on the disputed South China Sea, where Chinese military activity is viewed by Washington as irresponsible and Beijing complains of an inappropriate U.S. military presence. Mattis asserted that the U.S. view is widely shared in the region and beyond.

"That's an area where we will continue to have differences and talk through," Schriver told reporters after the meeting.

Mattis and Wei discussed an existing U.S. invitation for Wei to visit the U.S., but details remain to be worked out, Schriver said.

"There was a commitment on both sides to try to find a time" for such a meeting, he added.

China did not immediately comment to U.S. media outlets at the conference after the meeting between Mattis and Wei.

Just weeks ago, Mattis had planned to travel to Beijing for talks with Wei, but that fell through when the Chinese made it known that Wei would be unavailable, one of several signs that tension in the overall U.S.-China relationship was spilling over into the military arena.

Wei and Mattis were in Singapore this week for an Association of Southeast Asian Nations meeting.

Schriver had told reporters Wednesday that the Chinese had requested the Singapore meeting with Mattis. He said U.S. officials took this as a sign that the Chinese are interested in stabilizing the military relationship.

Speaking to reporters traveling with him earlier this week, Mattis acknowledged that the relationship has been difficult in recent times.

"We're two large powers, or two Pacific powers, two economic powers. There's going to be times we step on each other's toes, so we're going to have to find a way to productively manage our relationship," he said. "And the military relationship is to be a stabilizing force in the relations between the two countries."

As recently as June, when Mattis was in Beijing for his first visit to China as Pentagon chief, President Xi Jinping called the U.S.-China military relationship the "model component of our overall bilateral relations."

Since then, however, a series of irritants have shaken military-to-military ties. Schriver said the trigger for recent tensions was the Trump administration's decision in September to sanction the Chinese military for buying Russian fighter planes and missiles. That action was taken under the Countering America's Adversaries Through Sanctions Act passed by Congress in 2017. Beijing also strongly criticized a U.S. announcement of further arms sales to Taiwan, the self-governed island that Beijing insists is part of China.

China responded to these events with strong criticism, followed by a decision to cancel a planned visit to the Pentagon by the head of the Chinese navy and a confrontation in the South China Sea between a Chinese warship and a U.S. Navy destroyer, the USS Decatur. The Chinese also denied a request for a U.S. Navy ship to visit Hong Kong.

"That may turn out to be a relatively short bump in the road," Schriver said Wednesday, suggesting that the Singapore meeting between Wei and Mattis could nudge things back in the right direction, although the U.S. administration remains concerned that the Chinese have achieved a key goal by militarizing disputed land features in the South China Sea that Washington warned against.

China views Washington's criticism of its activities in the South China Sea as unnecessary meddling in internal Chinese affairs.

Earlier this year, Mattis cited China's military presence on some land features in the South China Sea as his reason for disinviting the Chinese military from an international naval exercise in the Pacific.