Home-loan rates ease back a bit 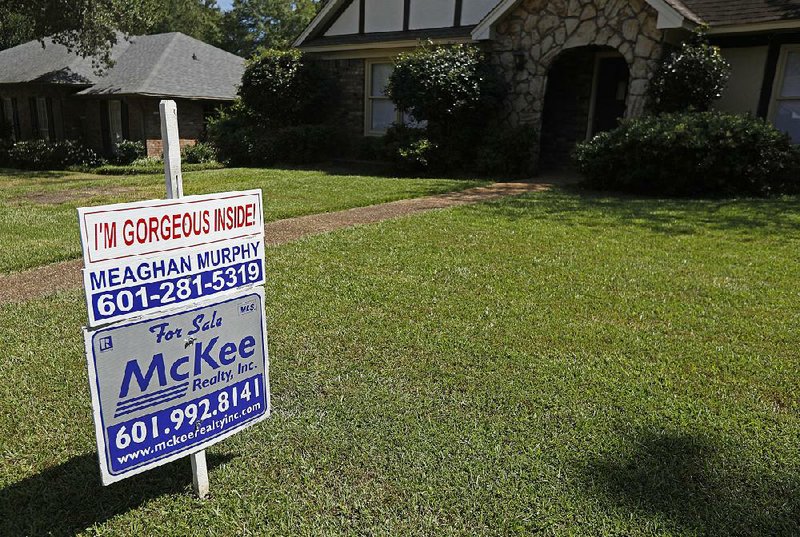 Long-term mortgage rates fell this week, but are still squeezing some buyers out of the market for homes like this one for sale in September in Jackson, Miss.

Last week's average was the highest level for the benchmark rate since the spring of 2011. A year ago, it stood at 3.88 percent.

The average rate on 15-year, fixed-rate loans eased to 4.26 percent this week from 4.29 percent last week.

Anxiety over rising interest rates -- a consequence of a strong economy -- has roiled financial markets in recent weeks and spilled over into the housing market.

The combination of higher borrowing costs and increasing home prices has made home ownership less affordable.

The average monthly mortgage payment nationally has risen nearly 16 percent or $223 per month since last year, according to calculations by Realtor.com.

"Buyers can expect to reach into their pockets even further to land a home this fall," said Javier Vivas, director of economic research for Realtor.com. "However, the nature of this affordability challenge is changing. Rates are taking on a bigger role and price gains are continuing to decelerate. To be successful, buyers need to keep a close eye on both sides of the equation and get prepared for rates to approach decade highs."

Interest rates on Treasury bonds, which climbed to seven-year highs last week as their prices dropped, steadied this week. The yield on the key 10-year Treasury note, which can influence mortgage rates, was at 3.15 percent Wednesday, down from 3.16 percent last week.

Rising interest rates have sent mortgage payments climbing twice as fast as home values, with typical monthly payments now 15.4 percent higher than they were a year ago, real estate data company Zillow said in a research note Wednesday. Factoring in the 6.5 percent gain in home values, it costs about $118 a month more to buy the same house today compared with a year ago.

To calculate average mortgage rates, Freddie Mac surveys lenders across the country between Monday and Wednesday each week.

The average doesn't include extra fees, known as points, which most borrowers must pay to get the lowest rates.

The average fee on 30-year fixed-rate mortgages was unchanged from last week at 0.5 point. The fee on 15-year mortgages fell to 0.4 point from 0.5 point.

The average rate for five-year adjustable-rate mortgages rose to 4.10 percent from 4.07 percent last week. The fee held steady at 0.3 point.

"Mortgage rates held mostly steady this week despite turbulence in the stock market, which saw its third-largest weekly decline since the financial crisis," said Aaron Terrazas, senior economist at Zillow. "For the most part, bond markets saw through this temporary volatility, which has yet to spill over to long-term lending rates. Rates remain at their highest levels since 2011 and are showing few signs of retreating. A steady stream of weak housing data, with more expected over the coming days, have thus far failed to put a dent in rates' upward momentum."

The Federal Reserve released the minutes from its September meeting this week. Although the central bank doesn't set mortgage rates, its decisions influence them. In the minutes, the Fed reiterated its stance that the best way to keep the economy strong is to continue to gradually raise interest rates. The Fed, which raised rates for the third time this year in September, signaled that it would probably increase rates again in December and possibly three more times next year.

"After rising to a seven-year high two weeks back, mortgage rates have remained mostly stable," said Shashank Shekhar, chief executive of Arcus Lending. "The meeting minutes from the Federal Open Market Committee didn't contain any surprises. There is no other major economic event or announcements that can have a significant impact on the rates. Also, after the sudden steep hike in late September, early October, the markets should pause for a week or so. Put all that together and we might just have a quiet week on the mortgage rates front."

Meanwhile, higher rates have caused mortgage applications to plummet, according to the latest data from the Mortgage Bankers Association. The market composite index -- a measure of total loan application volume -- declined 7.1 percent from a week earlier. The refinance index fell 9 percent from the previous week, while the purchase index dropped 6 percent.

The refinance share of mortgage activity accounted for 38.1 percent of all applications.

"The jump in rates over the past month has further diminished refinance volume, but home-buyer demand has held up strongly this fall," said Bob Broeksmit, association president and chief executive. "Even with rates almost a percentage point higher than a year ago, purchase applications last week still rose 2.5 percent [year-over-year]."

Information for this article was contributed by The Associated Press and by Kathy Orton of The Washington Post.