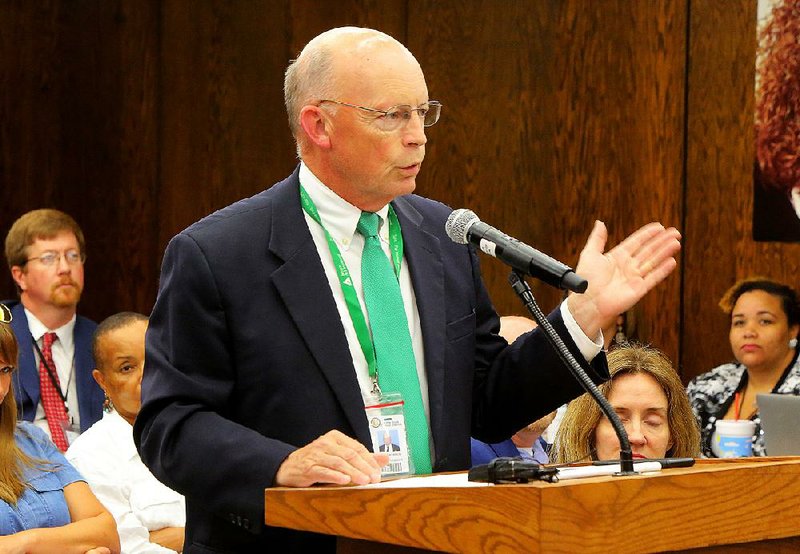 Baker Kurrus is shown in this 2016 file photo.

To bike through central Little Rock alongside Baker Kurrus is to see his view of the city's inequities as well as its strengths.

On a recent Tuesday morning ride, Kurrus points to old houses with "good bones," some of which have been refurbished, boasting restored brick or fresh blue paint, while others sit in disrepair, with black trash bags on the uneven street out front.

Kurrus' brakes whistle as he rounds a corner, explaining how those houses are an untapped source of property taxes in a city where, in his view, "everybody's talking about getting a piece of the [budgetary] pie, but nobody's talking about how to make the pie bigger." Then he points out a shock of bright red barefoot lilies sticking up out of one overgrown yard.

At 64, Kurrus says he rises early and rides for hours each day. Cruising through the city, it's common for him to pass former business associates and parents who know him from his time heading the Little Rock School District or serving on the School Board before the state takeover. 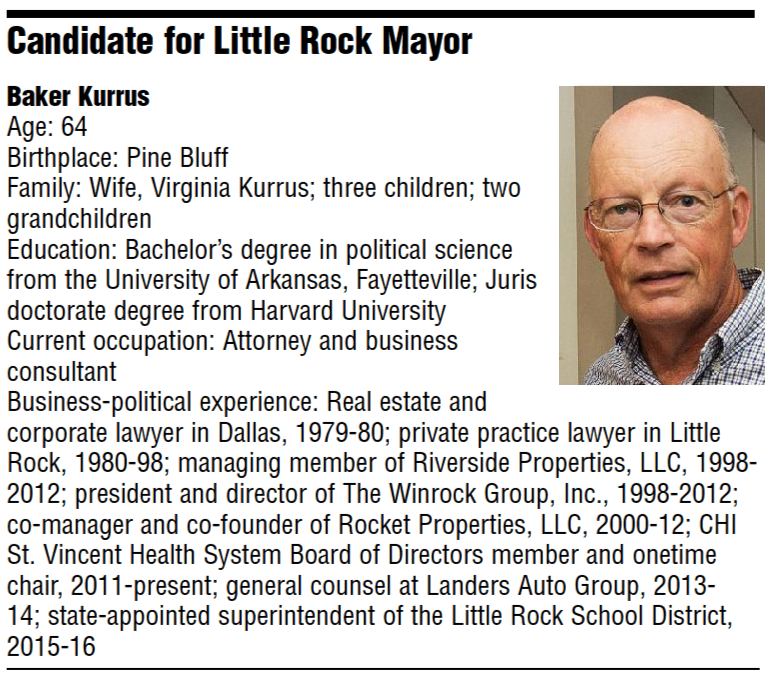 Kurrus said his years in law, business, community involvement and education add up to a unique background and set of skills that compelled him to make a bid for mayor, becoming one of five candidates vying for the office Mark Stodola will leave after 12 years come January.

"When you want to talk about fresh new leadership, somebody different, somebody out-of-the-box -- that's me," he says, picking up speed as he talks. "I don't get this whole notion that 'Baker's kind of an old coot, he's a wheezer.' I'm a hundred and eighty degrees from anybody that's ever had that job."

Kurrus was born in Pine Bluff and grew up in Little Rock and Hot Springs, graduating from "itty-bitty" Lakeside High School and going on to the University of Arkansas, Fayetteville. His move to attend Harvard University for law school marked his first trip on a commercial airplane, he says. He carried just one suitcase he'd won in a speech competition and spent the first nights before the semester started on a park bench.

Working to put himself through school, he's had a lot of jobs. He's cleaned fish, mowed grass, worked in construction and gotten the end of one finger cut off working on a pipeline in Oklahoma (it's sewn back on and "works pretty good," he said).

After law school, he spent about a year as an attorney in Dallas until family issues brought him back to Arkansas. He continued practicing law in Little Rock, eventually becoming a businessman but never learning to play golf, he said.

The only elected position he's held was on the Little Rock School Board, where he served for 12 years. Madeline Moore, the oldest of Kurrus' three children, called that role "pretty tireless and thankless." He'd get phone calls at 9 p.m., but picked them up and was glad that people cared, she said.

Moore, now 33 and a working parent herself, said she's surprised at how he managed to balance work, volunteerism and family. She added that her parents worked as a team. Kurrus' wife, Virginia Kurrus, has worked in finance and green development, and Moore said she can't remember a week when her mom wasn't volunteering in one of Little Rock's public schools.

Kurrus has been a CEO of sorts, too. From May 2015 to June 2016, he served as the state-appointed superintendent of the Little Rock School District. During that time, the district initiated the process of constructing two new schools, Pinnacle View Middle School in northwest Little Rock and Southwest High School.

It was a demanding job. Kurrus recalled a time he came home and his wife, noticing how red his ears were, made him have his blood pressure taken.

It's that tendency to give so much of himself that at first made his family try to talk him out of running for mayor, Moore said. But now Kurrus' family and friends are "all in," Moore said, saying she realized how qualified her dad is for the job.

Carl Cross, a fixed income broker in Little Rock and a longtime friend, agreed, also citing Kurrus' compassion. Despite his leadership roles, Kurrus "thinks as much about the guy who's sweeping the floor at night," Cross said.

The two play in their church's prison ministry band, Kurrus on guitar and harmonica.

Kurrus' contract as superintendent was not renewed for a second year, a move that came after he spoke out against the expansion of the LISA Academy and eStem public charter schools in Little Rock. He told the state Education Board that charter schools in part attract more affluent, easier to educate students and leave the district with fewer resources to educate disproportionately high percentages of poor students and students with special education and English learning needs, the Democrat-Gazette previously reported.

Sadie Mitchell, now a deputy superintendent in the Little Rock School District, said Kurrus might not have agreed with everyone, but "played well in the sandbox" and collaborated successfully during his tenure.

"He was a no-nonsense person, especially when it came to students, teachers and employees," Mitchell said. "I felt like his management of the body, being as large as it was, was on point."

Phillip Carlock, principal at Stephens Elementary School, said while superintendent, Kurrus could be in the school, checking on something, and Carlock wouldn't even know he was there.

Kurrus supports returning the school district to local control and has said the schools will improve once neighborhoods do. That all takes community buy-in, he said. Little Rock needs to become somewhere people want to live, and he never hesitates to extol the merits of bike paths and composting.

He has a small farm about 40 miles east of Little Rock. He doesn't get out there as much as he'd like, especially with "this whole mayor thing," as he sometimes lightheartedly refers to his campaign.

Deciding whether to run took a lot of "soul-searching," Kurrus said. He doesn't have political ambitions, but he eventually settled on the conclusion that being mayor would be another opportunity to serve.

Print Headline: Kurrus says his experience adds up to a unique background to be mayor