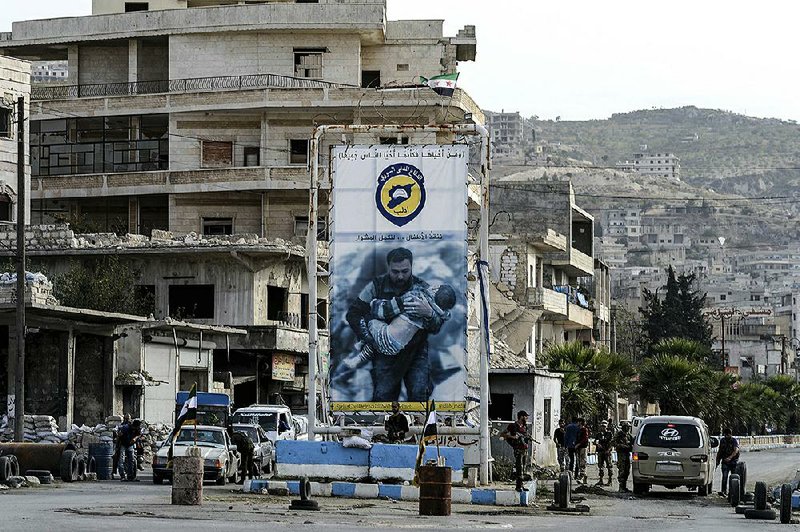 Syrian opposition fighters stop a car at a checkpoint in the northwestern city of Idlib, Syria, late Saturday.

DAMASCUS, Syria -- Jordan and Syria agreed Sunday to reopen a vital border crossing between the two countries, three years after the commercial lifeline fell to rebel groups and traffic was halted.

Also Sunday, Israel said its Quneitra crossing with Syria will reopen today to U.N. observers, four years after it was closed because of the fighting.

The reopening of the crossings is a major boost to the Syrian government, keen on sending messages to its citizens and the world that it is slowly emerging victorious from the bloody conflict and beginning to restore vital services and relations.

Reopening the crossing with Jordan would bring major relief to President Bashar Assad's government by restoring a gateway for Syrian exports to Arab countries. Government coffers are also expected to experience a boost from transit fees collected from convoys from Jordan. Last month, it raised fees for all trailers transiting through its territories.

The resumption of commercial trade through the crossing will also be a diplomatic victory for Assad, whose government has been isolated from its Arab neighbors since the war began in 2011.

Arab countries have boycotted the Syrian government since the early days of the war, freezing its membership in the 22-state Arab League.

Jordan government spokesman Jumana Ghunaimat said the Naseeb crossing would be opened today after operational details have been agreed upon, according to the Jordanian Petra news agency. Syria's Interior Minister Mohammed al-Shaar also confirmed the crossing's reopening, according to Syria's state news agency.

"The Naseeb crossing is a vital lifeline for trade between the two brotherly countries Jordan and Syria through them to other Arab countries," Ghunaimat said, according to Petra. Rebels seized the crossing in 2015, disrupting a major trade route between Syria and Jordan, Lebanon and oil-rich Persian Gulf countries.

Syrian troops recaptured it in July this year after rebels reached an agreement with Russian mediators to end the violence in the southern province of Daraa and surrender the crossing.

The crossing is also vital for Syria's neighboring Lebanon, providing its agricultural products a route to foreign markets.

The recapture of the Naseeb crossing marked a major victory for Assad's forces, which have been on a winning streak since 2015 when Russia threw its military weight behind Damascus.

Fighting has subsided across most of Syria, but in the absence of a political deal, more than 40 percent of the country's territory remains in the hands of armed opposition and their foreign supporters.

On Sunday, Israel's military announced that the United Nations has decided to return its peacekeeping force to the Quneitra crossing area. The crossing will be used exclusively for U.N. forces, it added.

The Syrian government plans to escort media to the crossing today

Syrian forces recaptured the Quneitra area in July. Russian military police deployed in the area, including on the edge of the Israeli-occupied Golan Heights, setting up checkpoints. Moscow said it planned to work closely with the U.N. force.

Israel captured the Golan Heights in the 1967 war. The U.N. peacekeepers deployed in the area in 1974.

Separately, Syrian state TV said Sunday that technicians have installed two transmitters to restore the broadcast of the terrestrial TV station and Voice of Youth radio to the eastern city of Deir el-Zour and surrounding areas for the first time in seven years. It was the latest in government efforts to restore normal life to areas it has recaptured from armed groups.

Government forces, aided by Russian aircraft and allied militia, chased Islamic State fighters out of the city and most of the western banks of the Euphrates River last year.

In a separate offensive that occasionally raised tensions, rival U.S.-backed Syrian Defense Forces fought the militants on the eastern banks of the river and along the border with Iraq. The Kurdish-led forces, backed by U.S.-led coalition air power, continue to battle Islamic State militants in Hajin, a small pocket east of the river.

On Saturday, Islamic State militants stormed a settlement for displaced people in Hajin and abducted scores of civilians. The Britain-based Syrian Observatory for Human Rights said 130 families were kidnapped.

The U.S.-led coalition said it couldn't confirm news of the kidnapping. It said it has been dropping leaflets for months requesting that civilians leave the area "to avoid the brutal tactics" of the extremist group.

The Islamic State "has used innocent civilians as human shields in the past and leaflets often give them instructions for the quickest and safest exits, but we fully understand many have no other places to go," said Col. Sean Ryan, spokesman for the U.S.-led coalition.

Information for this article was contributed by Sarah El Deeb and Josef Federman of The Associated Press.