Farmers facing a perfect storm when it comes to trade war 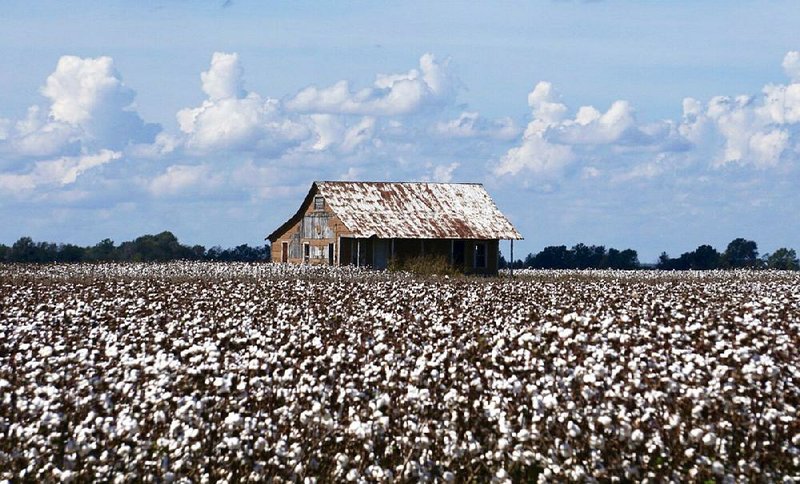 A cotton field is seen near Pickens in Desha County earlier this month. Commodity prices, particularly for soybeans, dropped during the summer as a trade war with China escalated.

McCRORY -- For most farmers, 2018 is looking a lot like the four previous years -- low prices for their crops, dairy and beef -- but with a twist: They got caught up this year in a trade war.

Prices for their commodities, particularly soybeans, have dropped throughout the summer after China imposed 25 percent tariffs on the crop in retaliation for tariffs placed by the Trump administration this spring on Chinese aluminum and steel. Until the trade war, China was the top buyer of American soybeans, spending some $13 billion on nearly 60 percent of the crop each year.

The tariffs are just one part of a "perfect storm" facing farmers this year, Zippy Duvall, president of the American Farm Bureau Federation, told a crowd of about 200 gathered Tuesday night for the annual dinner of the Woodruff County Farm Bureau.

The crowd included about a dozen young students representing Future Farmers of America chapters from nearby Augusta, Cotton Plant and McCrory.

The youngsters were Duvall's audience as much as anyone else inside the Robert and Dorothy Rowland Entertainment Building at the Three County Fairgrounds, which straddles the city limits sign for McCrory and the eastern edge of the Patterson community. The fairgrounds is host to the annual county fair for Woodruff, Jackson and Cross counties.

"Our farmers don't have enough help," Duvall, a 3rd-generation cattle and poultry farmer from Georgia, said. "Nobody wants to do our work. We're fighting over immigration policy. When I go around and talk to farmers, that's the No. 1 issue."

He implored the young FFA members to stay home and work the fields, to help make agriculture profitable enough to keep family farms together and and to hire migrant workers where needed.

So far, legislation to set federal agriculture policy for the next five years remains stalled in Congress, primarily over disputes involving farm subsidies and the Supplemental Nutrition Assistance Program, or food stamps. The 2014 farm bill expired Oct. 1, with no extension by Congress.

Soybean prices have dropped by more than $2 a bushel, or about 22 percent, during the trade war. Farmers in Arkansas, traditionally among the top 10 soybean-producing states, planted about 3.3 million acres of the crop this year.

Duvall didn't mention President Trump by name, but said, early in his 32-minute talk, "Then there's a little thing called tariffs. Do we all exactly understand what he's doing? Probably not. I've tried to educate myself. I know it's made it very difficult for farmers, but we have to change the way we've done business for years and years and years."

In late August, the U.S. Department of Agriculture unveiled a relief package for farmers hurt by the tariffs, with $3.6 billion available to soybean farmers alone. Soybean farmers who participate in the program will get $1.65 a bushel, enough to soften but not eliminate the tariffs' full effect. That money flows to farmers only until after they harvest and sell their crops.

Another $1.1 billion will go to farmers of other commodities hit by tariffs.

Corn growers will get 1 cent per bushel, after harvesting and selling their crop. Cotton growers, still weeks away from finishing their harvest, will receive 6 cents a pound. Pork producers will receive $8 a head.

"I know some farmers got hurt more than others," Duvall said. Storing the crops -- and hoping for better prices -- won't help, Duvall said, because large stocks of commodities cause prices to fall.

The relief package also includes the government buying $1.2 billion in fruits, nuts and vegetables affected by the tariffs, with those commodities being distributed to food banks and pantries around the nation. Another round of direct payments, of up to about $6 billion, could be made late this year or early next year.

The USDA in August revised its forecast for net farm income for 2018 to $65.7 billion, up from the $59.5 billion projected in February. The revised forecast of $65.7 billion is the third-lowest level in 10 years and 13 percent less than last year. Farmers' net income in 2013 hit an all-time high of $128 billion, adjusted for inflation.

"Fifty-two percent of our farm income has gone away the last five years." Duvall said. "If you don't work on a farm and someone took 52 percent of your paycheck away, what would your finances look like?"

The USDA also projected total farm debt this year to hit $407 billion, up nearly $14 billion from last year, its highest point since 1982 when adjusted for inflation. Farmers' debt-to-asset ratio will rise to 13.4 percent, the highest level since 2009, according to the USDA.

Wes Fairchild, a Farm Bureau insurance agent in Woodruff County, said before the dinner that if farmers don't make money, no one else in town does either. "They're not buying tractors, they're not buying new cars," Fairchild said.

Earlier in the day, Perry Galloway, of the Gregory community, was harvesting early-planted soybeans that should have been cut and collected by combines weeks ago. "We're a good two or three weeks behind schedule," Galloway said, citing heavy rainfall of more than 6 inches brought on by what was left of tropical storm Gordon in early September.

"That was some bad timing," said Galloway, who took over as president of the Woodruff County Farm Bureau the night of Duvall's speech. "The rain came just when the beans were ready to go. We were kept out of the fields for 10 days to two weeks."

The extra moisture, coupled with high temperatures, hurt the quality and quantity of the early-planted fields, Galloway, 51, said. Soybeans planted later in the season should be fine, he said.

The late-season rains hampered harvest across the state, regardless of the crop, according to the USDA's crop-progress reports last week.

"I feel pretty confident all our beans will be sold but maybe not at the price we'd like," Galloway said. 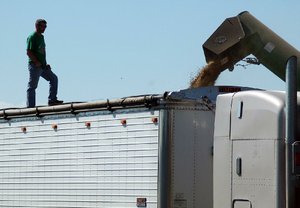 Photo by Stephen Steed
A truck driver oversees the transfer of soybeans from a tractor’s grain hopper at Galloway Farms in Woodruff County on Monday. A USDA relief package for soybean farmers hurt by the tariffs will pay them $1.65 a bushel this year.