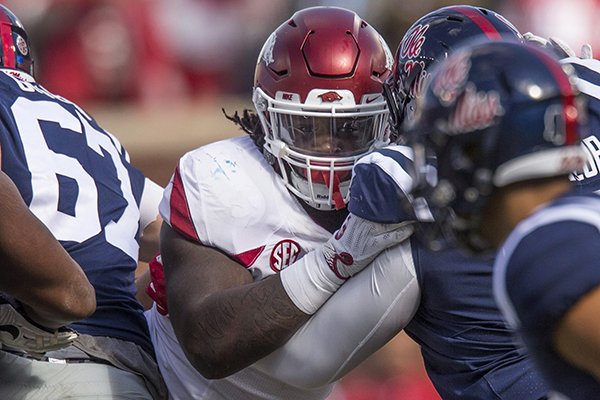 Arkansas defensive end McTelvin Agim is blocked during a game against Ole Miss on Saturday, Oct. 28, 2017, in Oxford, Miss.

All games this week are SEC vs. SEC, and that only happens three times this season. Only Alabama appears ready for another lopsided win, so there are some competitive games.

Arkansas got a break from being the brunch bunch with a night game in The Rock, but returns to 11 a.m. next week when it hosts Tulsa. With three games left where kickoff time is still to be determined, most likely the Razorbacks will have at least one more 11 a.m. kickoff.

Had a very mediocre week picking last week, going 4-4 and bringing the season record to 49-15. Here's this week's picks:

The Rebels are favored by almost a touchdown. Oddsmakers must like it that Ole Miss gave up only 62 to Alabama while the Razorbacks allowed 65 to the Crimson Tide. Most are expecting this to be a shootout as Ole Miss has scored 70 or more points twice, but the Rebels average 57.75 points per game in nonconference and 13.5 in SEC play. However, the Hogs average 33 and 17, but did score 31 on mighty Alabama. Soldout crowd at War Memorial Stadium. Arkansas 31-28

The Tigers are riding a two-game losing streak -- Georgia at home and at South Carolina -- but Mizzou scored 29 on the Bulldogs and 35 on the Gamecocks, so scoring may not be a problem, scoring enough might be the problem. Stopping the Crimson Tide is the biggest problem. Bama averages 56 points per game and has been held to below 50 just once. They seemed to score on Arkansas whenever they wanted. If the perfect storm hits Tuscaloosa-- turnovers and mental breakdowns -- the Tide will still win. Alabama 63-27

The Vols issues can be summed up easily: They are not very good on either side of the ball. They could have had a respectable loss at Georgia, 24-12, but they gave up two touchdowns in the final four minutes. The biggest question surrounding the Tigers is how did they beat Washington? Did they spend the whole fall camp preparing for one game? If not for a ton of unspecial team play by the Razorbacks the Tigers might be winless in the SEC. A win here won't get Gus Malzahn off the hotseat, but it might ease the pressure a little. Auburn 31-28

A slow start against Notre Dame (down 16-3 at the half) cost the Commodores as they outscored the Fighting Irish 14-6 in the second half, but they followed that with a loss at home to South Carolina, and losing to Georgia made them 0-2 in SEC play. The Gators seemed to have made a statement last week when they beat No. 5 LSU in The Swamp 27-19. It was an even game, but the Gators found a way to win. Florida 28-24

Obviously, this is the game of the week for the SEC. The Bulldogs continue their march to Atlanta and a December showdown with Alabama, but this will be their biggest test of the season. If it were a track meet it might be a draw. The biggest difference might be in coaching. The Tigers had wins over ranked Miami and Auburn but went down hard last week. Bouncing back and putting points on the scoreboard are more important factors than a night camp in Death Valley. Georgia 35-31

In the last two weeks the Aggies have squeaked out wins over Arkansas and Kentucky and will find the Gamecocks riding a streak of confidence. South Carolina got a huge win over Missouri last week after a loss to Kentucky. There's not a lot on the line here. Both are going to be bowl eligible, but neither is a serious candidate for a divisional championship. Mild upset here. South Carolina 28-24