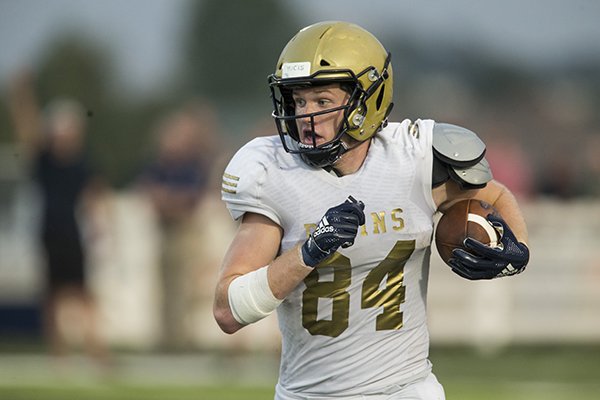 Pulaski Academy receiver Hudson Henry runs for extra yards against Springdale Har-Ber on Friday, Aug. 24, 2018, during a game at Wildcat Stadium in Springdale.

The Henry family legacy at the University of Arkansas continues with the oral commitment of Pulaski Academy tight end Hudson Henry to the Hogs on Thursday.

He announced a final five of Arkansas, Stanford, Penn State, Clemson and Wisconsin in May. He said he knew he would attend Arkansas on Monday after he visited Stanford last weekend.

"I decided to be a Razorback because that's just where my heart was. I think in the end that's just what it came down to. All the boxes checked off. Arkansas just had my heart and I think that's really, really important."

National recruiting analyst Tom Lemming of CBS Sports Network rates Henry a 5-star prospect and the No. 1 tight end in the nation.

"Major catch," Lemming said. "He has the same potential his older brother had at that similar age. Great size, can run, terrific student and a 5-star player who can run, catch and block."

Henry's father, Mark, was an offensive lineman for the Razorbacks from 1988-1991 and was an All-Southwest Conference center as a senior. His mother, Jenny, also attended Arkansas.

His grandfather, Skip Coffman, played basketball for the Razorbacks from 1957-1962.

"I think my family would've been happy wherever I would've gone because they just want me to be happy," Hudson Henry said. "But they're definitely, definitely happy for me."

"Hudson is a truly amazing football player and an even better young man," Kelley said. "He is big and physical when he needs to be, but plays with tremendous finesse when it's called upon. He has great spatial awareness and understands the game of football -- defenses, offenses -- extremely well."

He has some better attributes than his older tight end brother.

"He has really good body control and ball skills, especially for a player his size," Kelley said. "He is faster and has a better understanding of the passing game than Hunter had at this stage. Hunter had him in some areas, though."

Henry is the latest high-profile recruit to commit to Arkansas in the class of 2019.

The Razorbacks now have twelve 4-star prospects for the 2019 class, according to the major recruiting services. The class is ranked 12th nationally by Rivals after his commitment.

"Seeing all these other recruits jump on board, those are great guys that can push me and help me excel on the level that I need to be at," Henry said. "I think that really encouraged me to make the move and make the decision."

Henry said that Trey Knox, a 4-star recruit from Tennessee, had been recruiting him hard since he committed last week. "Trey Knox has been sending me Twitter messages all week," Henry said.

Henry is Arkansas' No. 22 commitment for the 2019 class. Oral commitments are nonbinding.