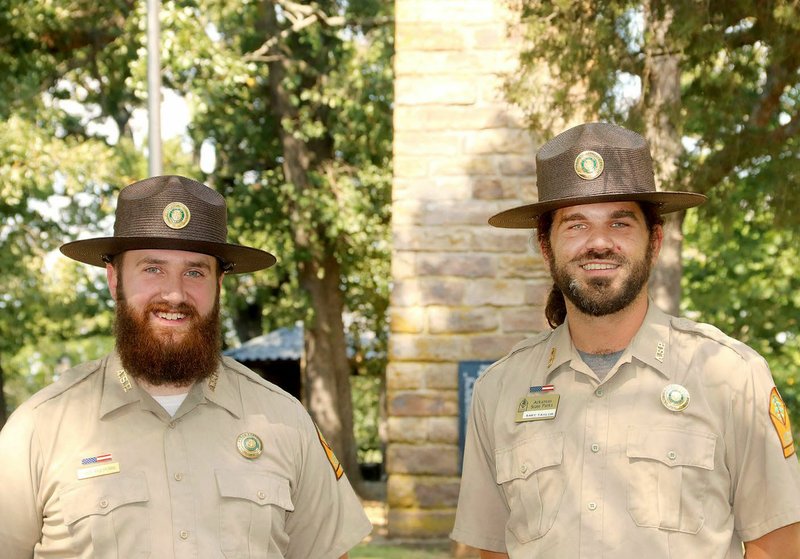 PRAIRIE GROVE -- The new interpreters for Prairie Grove Battlefield State Park believe they'll feel right at home on the site of the 1862 Battle of Prairie Grove because both are Civil War re-enactors.

Bart Taylor is a re-enactor for the Union side, and Matt Mulheran is a re-enactor on the Confederate side. The two started in Prairie Grove during the park's busiest weekend of the year, the Clothesline Fair held over Labor Day weekend.

Coming to work for Battlefield State Park was an easy decision for Taylor. He has been coming to the park for 20 years with his grandfather, a Union re-enactor with the Oklahoma Historical Society.

Mulheran has participated as a re-enactor on both sides, if needed, but prefers being a Southerner.

"I've spent most of my life living in the South," Mulheran said. "My dad was in the military, and I was born in Georgia. We've traveled to many Civil War battlefields, and I fell in love with them as a kid and decided to become a re-enactor."

Taylor, who holds a master's degree in history, comes to the state park from Gilcrease Museum in Tulsa, where he managed the museum's program called Gilcrease on Wheels. The mobile program travels to rural schools in the state.

Before Gilcrease, Taylor was curator of education for Will Rogers Memorial Museum in Claremore, Okla.

Mulheran, who has a degree in geology with a minor in history, comes to Battlefield State Park from the National Park Service. He worked onsite at two parks in Arizona and was a cave guide for the Ozark National Scenic Riverways in Van Buren, Mo.

Taylor said coming to work as an interpreter in Prairie Grove is crucial to his career.

"This seemed like a better fit for me going forward," Taylor said. "I've wanted to be an on-site Civil War interpreter and this is full circle for me."

He participated in the 2014 and 2016 re-enactments and said the Prairie Grove Battle is his favorite re-enactment because of the scenarios involved in the battles.

The two are collaborating as they brainstorm new programs at the park, but they've divided their responsibilities up somewhat. Mulheran is preparing for this year's re-enactment in December, and Taylor will concentrate on school programs and working with school groups.

They share an office and a dry-erase board. The room is filled with ideas for programs. Some of the events are existing programs to continue. Some are programs used by other Civil War parks in the country and others are new ideas.

For the second year, the state park will sponsor "Night at the Museum," named after the movie. Hindman Hall will become a living museum during the event and other activities will be going on throughout the park.

Other ideas are to have "10 and 2" programs, programs at 10 a.m. and 2 p.m. on Saturdays. A Federal Friday and a Southern Saturday also are suggestions written on their dry-erase board. They also are considering a winter lecture series, a program on U.S. black troops, an art show, movies and concerts in the park, candlelight tours and programs on the Trail of Tears, which comes through this area.

Mulheran even wants to get the dogs involved in the state park. His idea is to have a "Bark Ranger" program with dogs and their owners to help park visitors learn about bringing their pets to the park. Dogs that have gone through the program will be certified as a "Bark Ranger."

"This is a dog-friendly park, and we want to teach trail stewardship," Mulheran said.

Taylor said one of the goals of the park's programs is to let people know the park belongs to them.

"We want them to look at it and see that it's a place that's yours," Taylor said. "This place is for everyone."