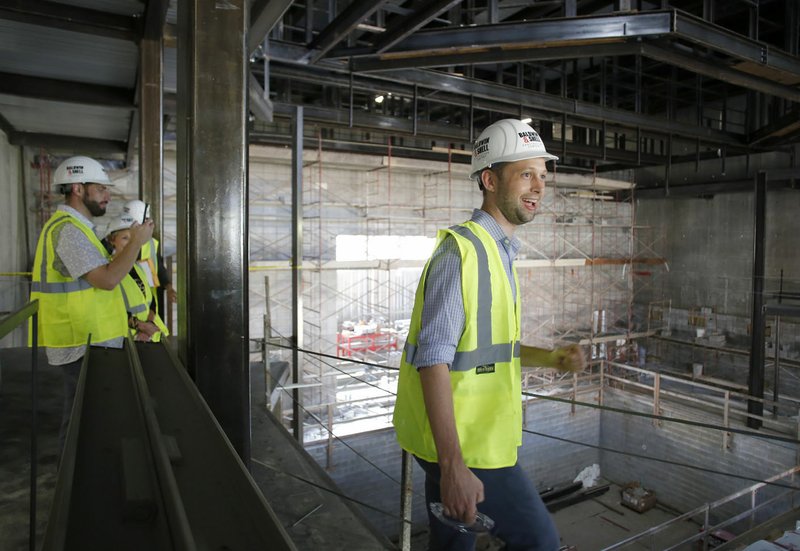 NWA Democrat-Gazette/DAVID GOTTSCHALK Martin Miller (right), executive director of TheatreSquared, describes the West Theatre on Monday inside the new TheatreSquared building in Fayetteville. City officials and guests toured the building that is under construction to see the progress of the facility that will house two theaters and other amenities.

FAYETTEVILLE -- The team behind the new TheatreSquared wants the 50,000-square-foot, three-level center to catch the eye and immerse visitors the moment they walk inside.

City Council members, administrators and tourism officials put on hard hats Monday and toured the facility as it stands so far. Most of the foundational structure, with its first bits of drywall but lacking finishes, is in place. Construction should wrap by June under local contractor Baldwin & Shell with the first shows scheduled for August.

The new 50,000-square-foot theater center will include:

• An open-all-day café bar at the corner of West Avenue and Spring Street.

For more information, go to:

Billed as a world-class center, the new TheatreSquared will feature something for theater lovers, performers, staff and visitors who just want to hang out at the corner of West Avenue and Spring Street, according to the team. TheatreSquared currently operates out of the Nadine Baum Studios building across West Avenue.

The council last year invested $3.1 million toward construction of the building. The Advertising and Promotion Commission also committed $3 million over 15 years. The Walton Family Foundation has awarded TheatreSquared $12.5 million in grants.

The $34 million campaign includes $31.5 million for the design, construction and equipping of the facility, plus $2.5 million to establish a trust that will serve as an operating reserve for the company. TheatreSquared so far has more than $21 million pledged toward its goal and is in the middle of its fundraising campaign.

The city leases the property to TheatreSquared rent-free.

Making the corner of West Avenue and Spring Street the focal point outside served as the guiding principle throughout the design process, Miller said. An open patio space on Spring Street has a stairway entrance and sidewalk leading to the front door, which opens into a three-story commons area.

"We really thought a lot about, along with our maker and design teams, how that could be a really active corner," he said.

The first and second floors visible from the corner will be enveloped by window panes with a rooftop terrace overlooking downtown. The two theaters -- the 120-seat Spring Theatre and 280-seat West Theatre -- have single, vertically aligned windows reaching a few floors' lengths.

Long corridors inside will channel light and sound to keep the activity outside from interfering with the theater experience inside, Marvel said. Dual performances will be able to happen at the same time with the cafe bar open inside and the hustle and bustle of downtown outside, he said.

"Whereas, you've heard of museum sickness -- it's where you're isolated from natural light. You get tired in an hour," he said. "That won't happen here."

Kyle Smith joined the City Council soon after the administration announced its financial commitment to the project. Walking through the space helped Smith get a true sense of how expansive it will be, he said.

The council approved a contract in June with Nelson Byrd Woltz Landscape Architects of Charlottesville, Va., to develop an arts district. The plan will incorporate downtown's urban setting with scenic street elements spanning West Avenue from around Dickson Street to the library.

It's easy to imagine the new TheatreSquared as a hub of activity when considering the planned cultural arts corridor, Smith said.

"I hope it becomes a gathering space for people whether they're coming to a show or taking a walk downtown," he said.

Council member Adella Gray, who also serves on the A&P Commission, said visiting the site reinforced her support of it.

"I think it's going to be a great gift to all of Northwest Arkansas," she said.