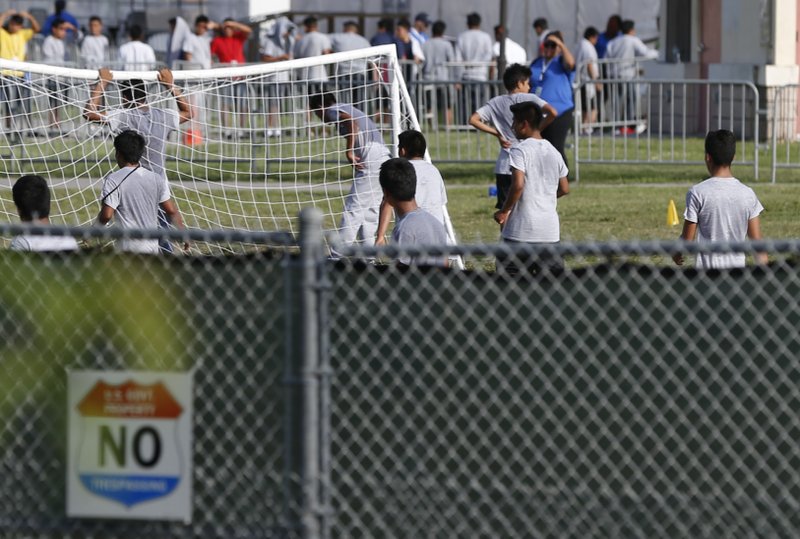 In this June 18, 2018, file photo immigrant children play outside a former Job Corps site that now houses them in Homestead, Fla. In a Wednesday, Nov. 28, letter to the heads of the Department of Health and Human Services and the Department of Homeland Security, 112 civil liberties and immigrant rights groups, child welfare advocates and privacy activists are crying foul, demanding an immediate halt to what they call an illegal practice. (AP Photo/Wilfredo Lee, File)

Earlier this year, the federal agency tasked with caring for asylum-seeking children separated from their parents at the U.S.-Mexican border officially took on a new, little heralded role: helping to deport relatives of the young migrants.

In a Wednesday letter to the heads of the Department of Health and Human Services and the Department of Homeland Security, 112 civil-liberties and migrant-rights groups, child-welfare advocates and privacy activists are crying foul, demanding an immediate halt to what they call an illegal practice.

Health and Human Services and Homeland Security are using information on U.S.-based relatives and other potential sponsors obtained from detained children to "arrest and deport those families," the authors say. Already, they write, "families have become too scared to step forward to sponsor children."

The new role for the Office of Refugee Resettlement, a Health and Human Services unit that works to reunite unaccompanied migrant children with relatives until their legal status can be resolved, began under an information-sharing agreement it quietly signed in April with immigration enforcement agencies in the Department of Homeland Security.

Fingerprints and personal data from would-be sponsors and members of their households were then fed into a database originally intended to track criminal histories -- but revamped in May to aid immigration verification, government documents show.

Wednesday's letter complains that federal, state and local authorities -- and some foreign governments -- have virtually untrammeled access to that database, which could subject law-abiding potential sponsors to unwarranted scrutiny.

Federal officials say the information-sharing aims to protect the migrant kids from traffickers and other abuse. But since it began, the average time children spend in federal custody has roughly doubled to more than two months.

Worse, child-welfare advocates say, the arrangement has made unwitting snitches of the children themselves -- most of them Central Americans fleeing some of the world's most violent, lawless nations.

"Children are being turned into bait to gather unprecedented amounts of information from immigrant communities," said Becky Wolozin, an attorney with the Legal Aid Justice Center, which signed the letter. The center is representing migrant children in a federal case in Virginia that challenges the information-sharing as arbitrary and capricious.

Neither the refugee-resettlement office nor the Homeland Security Department responded directly to questions about whether the arrangement violates legal protections for unaccompanied migrant children, which require they be held by authorities the shortest possible time.

At least 41 relatives and household members in the country illegally have been arrested for deportation by Immigration and Customs Enforcement based on the data-sharing, Matthew Albence, a top agency official, told a September congressional hearing. An agency spokesman said the arrests occurred from early July to early September but did not provide an updated number.

Democratic lawmakers in both houses of Congress have introduced legislation that would prohibit Homeland Security from using information obtained in screening potential sponsors in deportation proceedings.

The American Civil Liberties Union sued earlier in November to end the mandatory fingerprinting of potential sponsors and household members instituted with the information-sharing. The group blames the practice for delays in releasing migrant children that has contributed to their growing numbers in custody -- now officially around 14,000, the largest number in U.S. history.

Bob Carey, who ran the resettlement agency for nearly two years until January 2017, said the average time in custody for unaccompanied children "hovered around 33 days the entire time I was there." Now it's closer to 70 days, Health and Human Services says.

The Office of Refugee Resettlement said in an email that the longer stays are "a symptom of the larger problem, namely a broken immigration system that encourages them to make the hazardous journey."

Previously, the resettlement office collected fingerprints only from prospective sponsors in very specific circumstances, Carey said -- most often in the case of unrelated adults volunteering to sponsor children.

In his September appearance before Congress, Albence of Immigration and Customs Enforcement justified the information-sharing on law enforcement grounds. The agency said just over 80 percent of would-be sponsors were in the country illegally.

The system now includes among its records the fingerprints and personal data of prospective sponsors. The agency's tool lets law enforcement agencies ask about the immigration status of individuals arrested, subject to background checks or "otherwise encountered."