Consultations about new law advised before end of the year by JOYCE M. ROSENBERG THE ASSOCIATED PRESS | November 25, 2018 at 1:56 a.m. 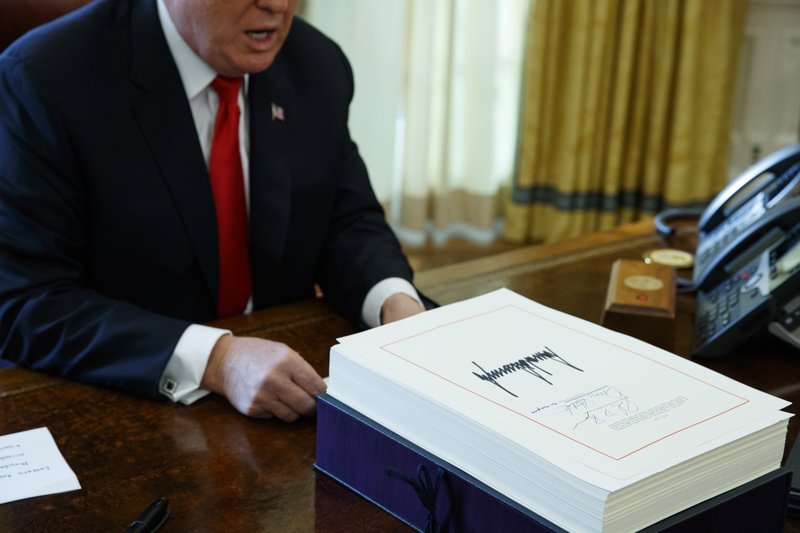 FILE- In this Dec. 22, 2017, file photo President Donald Trump speaks with reporters after signing the tax bill and continuing resolution to fund the government in the Oval Office of the White House in Washington. While accountants and tax attorneys always recommend small business owners review their finances and meet with tax professionals well before Dec. 31, 2018, it&#x2019;s particularly important now because of the law enacted nearly a year ago. (AP Photo/Evan Vucci, File)

NEW YORK -- Small-business owners who don't take time to understand the new tax law may be in for a painful filing season in the spring.

While accountants and tax attorneys always recommend owners review their finances and meet with tax professionals well before Dec. 31, it's particularly important now because of the law enacted nearly a year ago. Owners who don't have regular conversations with tax advisers may not understand the changes, many of which are significant and complex, said Chris Jackson, CEO of Lionshare Partners, a financial planning service.

"They look at just the brackets and think 'the brackets went down, by default the amount I'll pay will go down,'" said Jackson, whose Los Angeles practice includes small-business owners.

The IRS began issuing guidelines for complying with key sections during the summer, and tax pros have helped many owners estimate what this year's tax bill will be. A look at some of the tax issues owners need to consider, and the benefits some are already getting:

A critical question for owners of sole proprietorships, partnerships and what are known as S corporations is whether they can claim a new deduction aimed at small-business owners. The law allows owners of many of these companies to deduct 20 percent of what's known as qualified business income. But the IRS' guidelines set income thresholds -- $157,500 for an individual and $315,000 for a married couple filing jointly. Owners with taxable income up to those amounts can take the full deduction, and a partial deduction is possible above those limits.

The calculations for the deduction are complex, and there's a wrinkle for owners whose companies are what's called a specified service trade or business -- for example, health providers, attorneys, accountants or consultants. They have no deduction if their taxable income is more than $207,500 for an individual or $415,000 for a married couple.

The amount of the deduction may be affected by the compensation owners pay their employees. And owners with multiple businesses also must determine which of their income sources qualify for the deduction, said Ken Rubin, an accountant with Rubin Brown in St. Louis.

While the IRS guidelines have ended some uncertainty about the deduction, "the question now is, 'How can I be sure that I'm legitimate in taking it,'" Rubin said.

The law provides for a big reduction in the corporate tax rate, to 21 percent from 35 percent. That had many owners asking tax pros whether they should convert their sole proprietorships, partnerships and S corporations to what are called C corporations to take advantage of the lower rate. Probably not, was the answer. C corporations, the structure used by the nation's biggest companies, are taxed on their income, and their shareholders, including some small-business owners, must then pay tax on dividends.

"While some people may have been thinking a C corporation may be better, the double tax part of it knocks out a lot of the opportunity for savings," said Manuel Pravia, an accountant with MBAF in Miami.

There may be some businesses that will benefit from becoming C corporations, said Julian Fortuna, a tax attorney with Taylor English in Atlanta. An owner who expects to take a company public needs to structure it as a C corporation. An owner who doesn't plan to pay dividends doesn't have to worry about double taxation.

Still, Fortuna said, "only for a small percentage have we advised that it makes sense to become a C corporation."

CAN I DEDUCT THAT LUNCH?

It was clear when the law was enacted that companies could no longer deduct the cost of entertaining clients; there'd be no more breaks on theater or sports tickets or golf fees. It wasn't clear until the IRS issued guidelines last month that money spent on food -- taking clients out to dinner or bringing in meals for employees -- would still be 50 percent deductible.

Jackson is spending less on entertaining his financial-planning clients and more on taking them out for meals after the change. But Leslie Saul, who owns an architecture and design firm bearing her name, is shrugging off concerns about deductions.

"Whether or not our meals are 50 percent deductible or zero percent deductible, we will continue to bring in food for staff meetings and for client meetings. It's the cost of doing business," said Saul, whose company is based in Cambridge, Mass.

PUTTING TAX SAVINGS TO USE

Many companies that began crunching numbers immediately after the law took effect are already using their tax savings. Digital Media Solutions raised the pay of its hourly workers and renovated break rooms and other parts of the marketing company's premises, CEO Joe Marinucci said.

"We knew what the impact was going to be and how much more cash flow we were going to have," said Marinucci, whose company is in Clearwater, Fla.

Paul Allen learned soon after the law was enacted that there was a break for small producers of beer, wine and liquor: Tax on the beverages they make was slashed by 80 percent to $2.70 a gallon from $13.50. He factored that into the strategy for his company, Hope Springs Distillery, which began producing gin, absinthe and vodka last year.

"We decided to use the cost reduction to lower our selling prices, which has helped us to be much more competitive," said Allen, whose company is in Lilburn, Ga.

Before the break, the tax was Allen's biggest expense. By cutting his prices on his Top Hat vodka from $23 to $20 a bottle, Allen says he's now able to better compete with national brands.