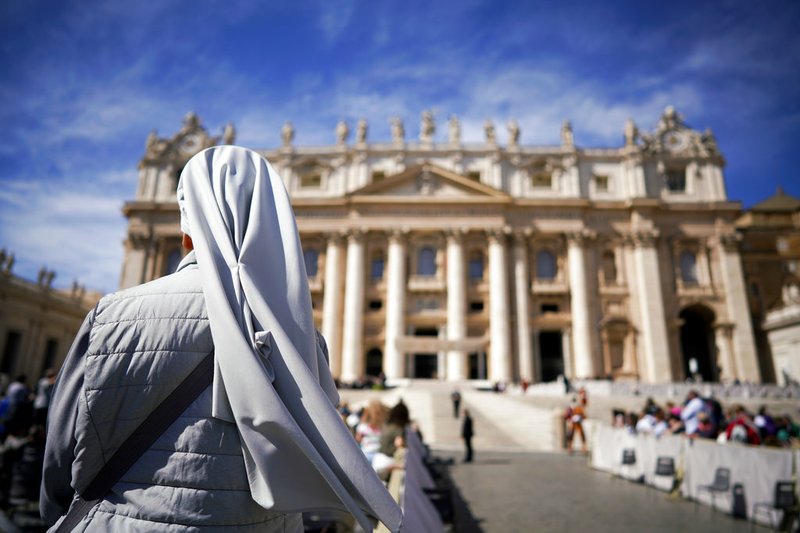 In this Wednesday, Sept. 26, 2018 file photo, a nun waits for the arrival of Pope Francis for his weekly general audience, in St. Peter's Square at the Vatican.

ROME -- The Catholic Church's global organization of nuns has denounced the "culture of silence and secrecy" surrounding sexual abuse in the church and is urging sisters who have been abused to report the crimes to police and their superiors.

The International Union of Superiors General, which represents more than 500,000 sisters worldwide, vowed to help nuns who have been abused find the courage to report it, and pledged to help victims heal and seek justice.

The statement, issued on the eve of the U.N.-designated International Day for the Elimination of Violence Against Women, was the first from the Rome-based International Union of Superiors General since the abuse scandal erupted anew this year and as the sexual abuse of adult nuns by clergymen has also come to light. The Associated Press reported earlier this year that the Vatican has known for decades about the problem of priests and bishops preying on nuns, but has done next to nothing to stop it.

In the statement Friday, the International Union of Superiors General didn't specify clergy as the aggressors. While such abuse is well known in parts of Africa, and an Indian case of the alleged rape of a nun by a bishop is currently making headlines, there have also been cases of sexual abuse committed by women against other women within congregations.

The statement was broad, condemning what it called the "pattern of abuse that is prevalent within the church and society today," citing sexual, verbal and emotional abuse as types of mistreatment that festers in unequal power relations and demeans the dignity of its victims.

"We condemn those who support the culture of silence and secrecy, often under the guise of 'protection' of an institution's reputation or naming it 'part of one's culture,'" the group said.

"We advocate for transparent civil and criminal reporting of abuse whether within religious congregations, at the parish or diocesan levels, or in any public arena," the statement said.

To mark the U.N. day calling for an end to violence against women, the head of the Italian bishops' conference, Cardinal Gualtiero Bassetti, issued a video message on the subject -- but didn't mention sexual violence against sisters by fellow clergymen, evidence of how taboo the subject is within the church hierarchy.

An Associated Press investigation found that cases of priests abusing nuns have emerged in Europe, Africa, South America and Asia, underscoring how sisters' second-class status in the church has contributed to a power imbalance where women can be mistreated by men with near impunity.

While some nuns are finding their voices, buoyed by the #MeToo movement, many victims remain reluctant to come forward. Experts told The Associated Press that sisters have a well-founded fear they won't be believed and will instead be painted as the seducer who corrupted the priest. Often the sister who denounces abuse by a priest is punished, including with expulsion from her congregation, while the priest's vocation is preserved at all costs.

The Vatican has known for years about the problem in Africa after a series of major studies were commissioned in the 1990s. Religious sisters reported that African nuns were being particularly targeted by priests seeking to avoid HIV transmission from prostitutes or other women.

In the wake of the Associated Press report, the umbrella organization of U.S. sisters, the Leadership Conference of Women Religious, urged sisters who had been abused to report to both civil and church authorities. Many of the Leadership Conference of Women Religious' members also belong to the global International Union of Superiors General, which can provide a point of contact with the Vatican.