With about 17 months until the start of the 2020 U.S. Census, experts are looking at ways to hurdle over issues like Internet connectivity and a question regarding citizenship that they think could result in an undercount in Arkansas and a loss of federal funds for the state.

From 2010-17, Arkansas' overall population grew by about 3 percent, from about 2.9 million to just over 3 million, according to U.S. Census Bureau estimates. But the population in rural counties, especially in the Delta, has been dropping for years.

"My biggest concern in Arkansas is that the primary mechanism for getting answers is the Internet, and Arkansas does not have good numbers, especially in more rural populations," said Pam Willrodt, a demographer at the Arkansas Economic Development Institute.

Willrodt has been working with the Census Bureau and communities across the state to prepare for the count, which will rely more heavily on the Internet for planning and for census-taking.

About one in every four Arkansans, or 744,572, doesn't have broadband access, according to 2016 data from the Federal Communications Commission. Broadband is the term used to describe high-speed Internet access rather than dial-up access.

The census, required by the U.S. Constitution, is used to divvy up federal money, determine political representation and inform demographic research, among other things. The goal is to count everyone once and in the right place, according to bureau documents.

Even missing 1 percent of the population could mean that Arkansas will lose billions of dollars in federal funding for programs like school lunches, the Supplemental Nutrition Assistance Program and the Children's Health Insurance Program, said Rich Huddleston, the executive director of Arkansas Advocates for Children and Families. The group does research and advocacy work about issues like education, poverty and health care.

In fiscal 2015, Arkansas lost $909 in federal money for each person who wasn't counted in the last decennial census, according to a study from the George Washington University Institute of Public Policy. Federal dollars are doled out, in part, based on population.

The Arkansas Economic Development Institute at the University of Arkansas at Little Rock projects that a 1 percent undercount in 2020 could cause the state to lose $750 billion over a decade.

"The last thing we want to do is shortchange ourselves," Huddleston said.

Huddleston said the groups most at risk of being missed by census-takers are people in lower income brackets, people who speak English as a second language, people of color, and people who live in rural areas.

The operational plan for the 2020 census shows an increased focus on Internet use both for census planning and for respondents. Rather than walking every block to update address listings, census workers will walk about 25 percent of the blocks and use online reporting and digital maps to create a mailing list.

The census website says the bureau is trying to keep up with changing technology and improve survey response numbers by putting the census online.

The plan shows that there will be five attempts -- through mailed reminder cards or letters -- to get residents to respond online. A smaller portion of the population will get paper questionnaires at the beginning, according to the operational plan.

Willrodt said she is hopeful that paper questionnaires will be sent to the portion of the population that doesn't have reliable Internet access.

Ouachita County Judge Robert Mcadoo said he's concerned about the online push because although broadband access has improved in the south Arkansas county, federal data show that about 30 percent of the residents didn't have Internet access in 2016.

"In the 2010 census, I do believe that we were undercounted in Ouachita County," Mcadoo said.

Census data from 2010 showed that the county had a population of 26,120, down 2,670 from the 2000 count. Mcadoo thinks people in his county may not trust strangers or want to give them personal information, so he's working to remedy that through community events and public service announcements.

"It's going to depend on getting people in the right place who the clientele trust," Mcadoo said.

He plans on organizing events at the public library for people who don't have broadband access to use to fill out the census survey.

In Northwest Arkansas, Springdale Mayor Doug Sprouse also is concerned about getting people on his census committee whom residents trust. He's primarily focused on gathering a diverse committee.

"With our large Hispanic population and our large Marshallese population, we really need to concentrate in those areas to make sure we get an accurate count," Sprouse said.

It's his second time to lead Springdale through one of the decennial counts, and he is sure that during the past census, the Marshallese population was undercounted. The most recent census data show that there are just over 5,000 Pacific Islanders living in Springdale, but Sprouse thinks the number may be as much as three times that.

Sprouse said he is already working with the Marshallese Consulate to educate the community about what the census is and why it is important.

His other concern is with the Hispanic population. About 36 percent of Springdale's population is Hispanic, and Sprouse is concerned that a proposed question about whether respondents are legal citizens might cause people to skip filling out the survey altogether.

"We deal with the hand that's dealt us, and I understand the reasoning for asking the question, but it does have the potential to complicate our efforts in getting participation," Sprouse said.

Several states sued to have the citizenship question removed from the census. The U.S. Supreme Court has scheduled a hearing for February over what evidence can be considered as the litigation moves forward.

If the question is on the census, Willrodt said, she is trying to tell as many people as possible through community presentations that the answers are confidential.

"You don't have to complete the whole form for it to count," Willrodt said. "We don't even know if the question is going to be on there."

Census answers are legally required to be confidential and used only for statistical purposes, according to the bureau website.

To improve efforts to get a thorough census count, Willrodt's team will add a member who is from Puerto Rico in January. The new employee will help with the increased workload and lessen language barriers with the Hispanic community, she said.

The group worked to get communities to participate in the Local Update of Census Addresses, which allowed state and local governments to update addresses in the federal bureau's Master Address File.

Arkansas will also be a part of the Participant Statistical Areas Program, which begins after the start of 2019. This allows officials to review the boundaries of statistical areas -- things like census tracts and metropolitan areas. Willrodt said her group will be reviewing 48 counties and that 27 are already covered.

"We just need to go through and see if we agree with how they've split something up in our growing areas, especially," she said.

Pine Bluff Mayor Shirley Washington said her city was one that participated in the address update program, a process that began in 2017. She said the city deleted abandoned homes and added at least one new neighborhood, built after 2010, that has about 65 houses.

After city officials sent the list to the bureau in July, they began educating the community and putting up fliers from the Census Bureau about participation. She hopes to have computers available at the libraries and high school for residents who don't have Internet access at home.

The Census Bureau estimated that Pine Bluff's population was 43,841 in 2016. In 2010, the city's count was below 50,000 for the first time since 1960. Washington said she talks to census workers regularly and plans to attend a webinar in the next couple of months about ways to get the most accurate count possible.

"All the benefits that the city receives based on the census are so critical for Pine Bluff that we have to make sure everyone is counted," Washington said. 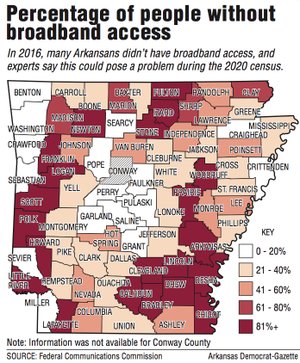