OLD NEWS: What was the deal with Arkansans’ fondness for Queen Wilhelmina? 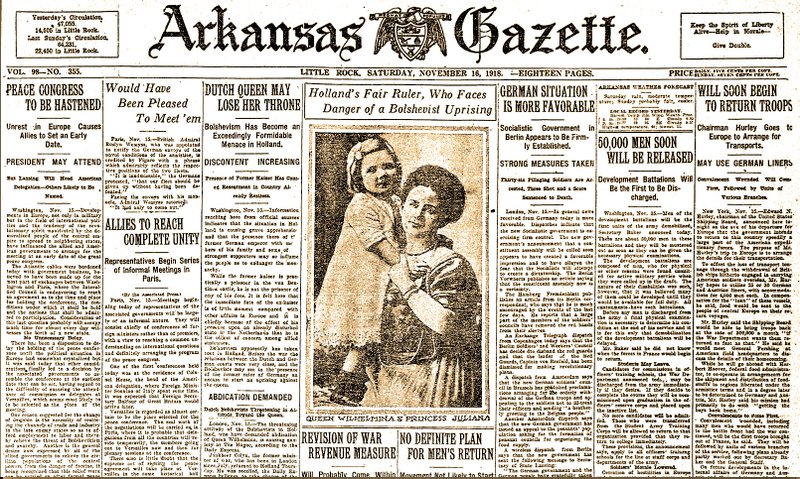 After several days of recovery from the wild excesses with which they greeted the Great War armistice Nov. 11, 1918, newspaper readers in Little Rock awoke Nov. 16 to a new world worry: Bolsheviks wanted to oust Holland's fair ruler!

Little Queen Wilhelmina of The Netherlands, that is — the only ruling woman monarch in the known world.

(I sense what you are wondering, and the answer is yes: Arkansans did know about Hawaii. But Liliuokalani had been overthrown for decades and, anyway, she'd died in 1917.)

Eye-grabbing atop the front page of the Arkansas Gazette, a big photo of Queen Wilhelmina holding her daughter, Juliana, highlighted three distressing reports under the headlines: "Dutch Queen May Lose Her Throne: Bolshevism Has Become Exceedingly Formidable Menace in Holland."

One of these wire-service reports explained that information had reached Washington from official sources that the situation in Holland was causing grave apprehension. The Netherlands had been a fiercely self-defensive noncombatant during the Great War, with a cute little queen who had kept the Kaiser at arm's length and yet, to newspaperly approval, was no pacifist.

Now she granted haven to the former German emperor — the presumably satanic William Hohenzollern — with his crown prince son and family and some of the strongest supporters of his wicked attempt to subjugate Europe and kill Arkansas boys. But he was practically her prisoner.

The Allied blockade had been very hard on the Dutch. Now Washington feared his presence could so inflame the multitude that rebels could rile them up to overthrow their queen, and her little daughter, too.

Bolshevism apparently has taken root in Holland. Before the war the relations between the Dutch and German courts were very close, and the Bolshevists may see in the presence of the former ruler of Germany an excuse to start an uprising against the queen.

Another article reported that these Bolshevists had demanded the queen abdicate.

But better news for her appeared Nov. 18, in the Gazette:

The queen drove out Thursday in an open carriage. She was cheered and received everywhere with respect.

I don't mean to suggest that these were giant stories in the Arkansas press. There were bigger fish to fry at home. For one, the United War Work Campaign was tanking. This was a national funding drive for seven agencies (such as the YMCA and Red Cross) that aimed to raise $170.5 million to entertain American soldiers. Unfortunately, the drive began Nov. 11, when Arkansans were busy celebrating the apparent end of the war.

Also, commanders at Camp Pike had instituted dog licenses and unlicensed dogs would be killed.

Also, there was a pentapedal hog in Baxter County:

It is a five-footed hog and it makes five tracks. The extra foot extends out just below the knee of its right foreleg, and touches the ground the same as the regular foot on that leg. In other ways the animal is normal and large enough to kill.

Still, Queen Wilhelmina was of interest. If, like me, you grew up here imagining that your state parks include one named after her because primordial or preliminary Arkansas was settled by the Dutch, or because once upon a time she came here or she wanted to come but couldn't ... nope.

Queen Wilhelmina State Park in Polk County is named after the fancy Wilhelmina Inn that opened atop Rich Mountain in 1898 for the comfort of passengers on the Kansas City, Pittsburg and Gulf Railroad — which was financed by capitalists from Amsterdam. Wilhelmina reportedly put in a good word that helped secure financial help in Spain. Also, she was inaugurated as full queen in 1898, no longer a teenage queen under a regent, her mother.

The inn had grand views and dance parties and fell into debt after three years. It changed owners and was raffled off for $30 lottery tickets. In 1910 it closed forever and fell into ruin — a tourist-attracting ruin.

By the way, Mena, the city near the park, is not named for the queen, says the online Encyclopedia of Arkansas History & Culture. "Mena" was Folmina Margaretha Janssen deGeoijen, the wife of Jan de Goeijen (pronounced something like De Queen), a big financier of the railroad. Janssen Park is named for her, and Janssen was the original name of the town that became Vandervoort, the maiden name of DeGeoijen's mother.

Arkansas pioneers certainly did include Dutchmen. The 1804-07 exploratory expedition up the Ouachita River by William Dunbar and Dr. George Hunter encountered a helpful Dutchman near what is now Arkadelphia.

Be we can be misled by place names like Holland in Faulkner County and Dutch Mills in Washington County. Holland likely was a person, not a nation. The online encyclopedia mentions a hunter and trapper who camped along the Little Rock-Clinton Road. And Dutch Mills might be "Dutch" because German immigrants lived there and "Deutch" is German for German.

That also might explain Dutch Creek in Yell County, but don't let me get to lyin' with my "might have" and "most likely."

Whatever the reasons, Arkansas newspapers followed the life of Wilhelmina from her birth in 1880 through her baby queenship at age 10, her inauguration, marriage, fevers, lost babies. The Arkansas Democrat especially liked gossipy reports about her. 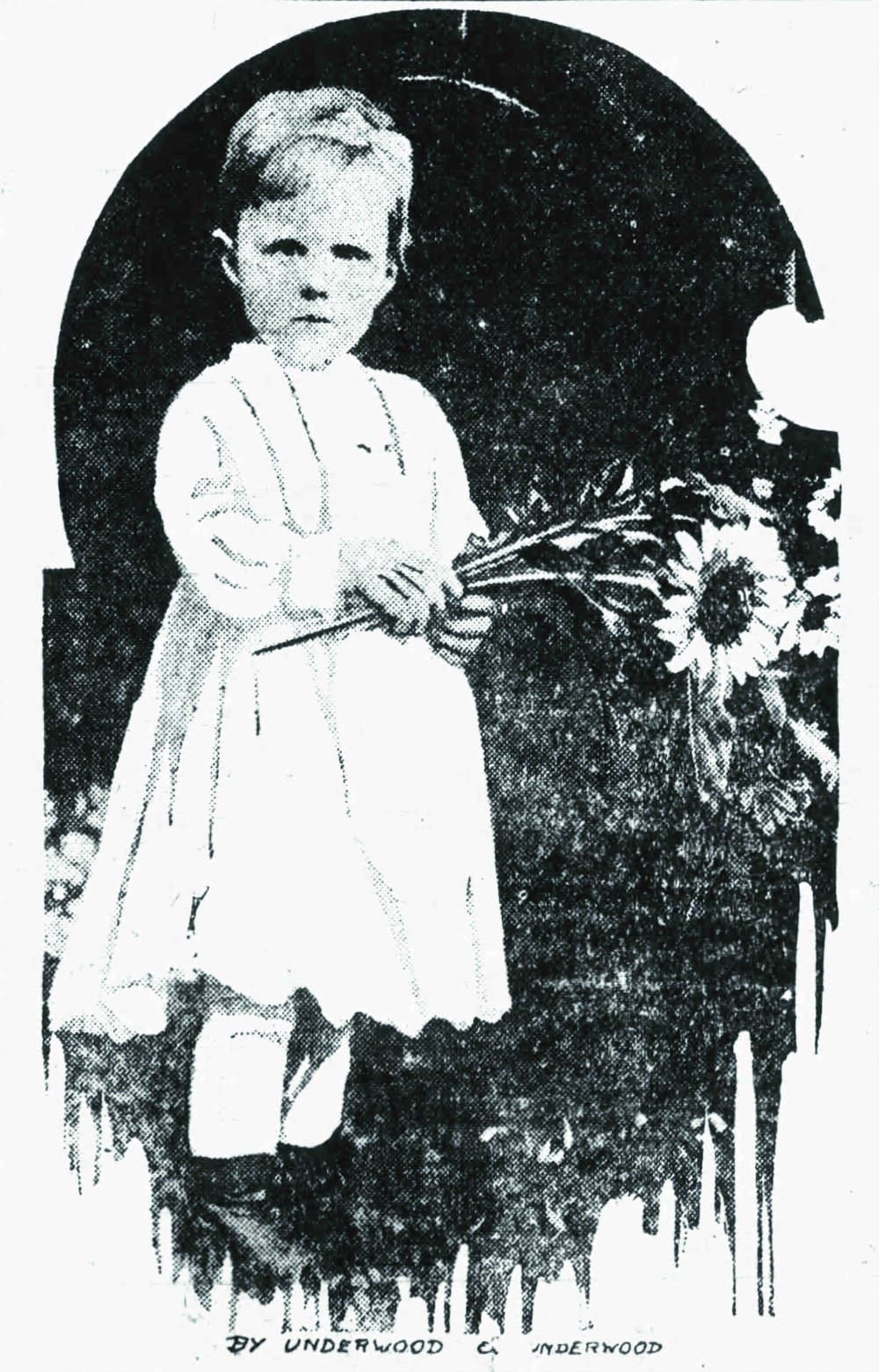 The queen of The Netherlands took this photo of Princess Juliana, 2 years, 8 months, in the palace garden; it appeared in the Arkansas Democrat on Jan. 11, 1912.

■ She wanted to ride a bicycle but her privy council determined it was undignified and unsafe. She had to content herself with a Shetland pony.

■ She kept a diary and drew little pictures in the margins.

■ She proposed to her consort, Duke Henry of Mecklenburg-Schwerin.

■ She refused to pay Henry's bachelor debts. He had a hissy fit and called her people bad names.

■ She was a stern teetotaler who fought with Henry before allowing wine to be served in her palace.

■ She pushed her daughter's baby carriage and bathed and dressed the baby, too.

■ She did not care for music, having been forced to learn as a child; she refused to force her daughter.

■ She could use a camera.

■ She was an expert skater. She taught Juliana to skate at age 5.

■ She thought Juliana was ugly and her renovated palace was ugly.

■ She was not appointed an intermediary for the pacification of Mexico.

■ She was not nearly as wealthy as other rulers.

■ She was bitterly opposed to female suffrage because it was associated with socialism.

■ She took great interest in her army. Even though she had grown stout she climbed a rickety ladder to talk to solders shivering in a loft and ordered that the roof be repaired.

■ She rode in a submarine and plunged below the surface of the ocean with it, twice.

■ She was an ardent philatelist.

I could go on, but already I test the patience of freedom-loving Arkansans, whose staunch loyalty to our democratic institutions must reduce stories about all monarchs — however cute they might seem — to dismal drivel, utterly beneath our notice.