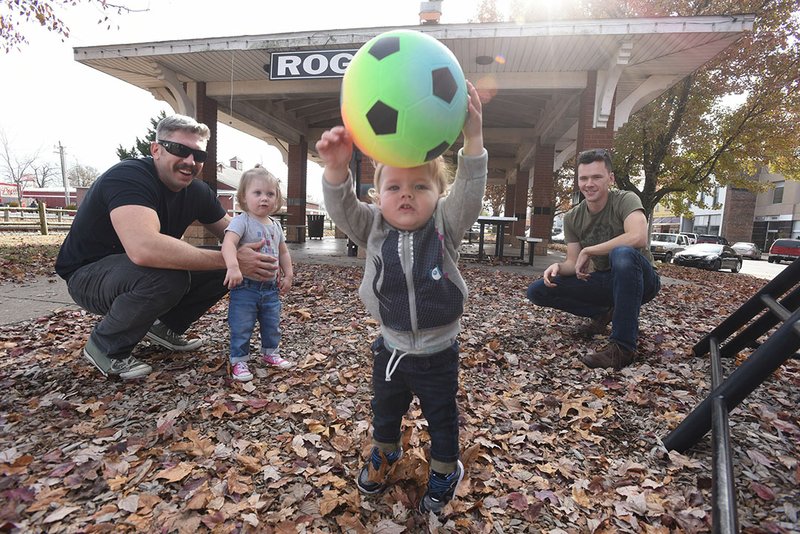 NWA Democrat-Gazette/FLIP PUTTHOFF Thompson Lockwood, 1, is the soccer star Saturday while playing at Frisco Park in Rogers with his dad, Lance Lockwood (right), Matt Burgess (left) and Zoe Burgess, 1. Frisco park is being redisigned and will be renamed Railyard Park.

ROGERS -- A redesigned and renamed Frisco Park will include a new stage and seating for 800 to 1,000 people, additional greenspace and an apple orchard, among other renovations.

The city plans to rename the downtown park Railyard Park and start construction in the spring of 2019, spokesman Ben Cline said.

To see plans for Railyard Park, go to www.rogersar.gov/1185/Railyard-Park-Design.

"We thought about a name for the park a long time, and eventually we said, 'It's really obvious. This is the Railyard Park.' We stole the Frisco logo, and we made it ours," said Carol Ross, principal architect at Ross Barney Architects in Chicago.

Plans show the park spanning both sides of the railroad tracks and include an apple orchard, multiple play areas, open greenspace, a gathering area, water towers, the farmer's market and event space. Cline said the estimated $6 million renovation project will be paid for using money from the $299.5 million bond voters approved in August. The bond issue included $41 million for parks and recreation.

"What we'd like to do is convert it to something that is more flexible that can be used for a concert," Ross said of what will be called Butterfield Stage. "We're looking to seat between 800 and 1,000 people in the shade so it's not the AMP, but it's the next thing down. It's filling this gap in this area."

The Walmart Arkansas Music Pavilion in Rogers seats about 10,000 people.

The stage at Frisco Park is Frisco Stage and runs parallel to First Street. When there are events on stage, people tend to stand in the street, said John McCurdy, community development director.

The new stage will face west.

Ross said the Railyard will include subparks.

"We want the park to be so iconic that you can say, 'Meet me at the Gathering,' for example, or 'Meet me at the Waterstop,' and people will know where that is rather than just at the Railyard Park," she said.

Railyard is intended to be a place where people of all ages could go, whether they want to play, read, eat or just sit, said Jim White, parks and recreation director.

The park will have a picnic area with long community tables where anyone can sit and a pop-up plaza for art events, Ross said.

"We'd like to turn the park into not just the center of downtown historic Rogers, but also an intermodal center, so we'd like to bring your current bus routes here," Ross said.

Rogers was established in 1881 and was named after Capt. C.W. Rogers, general manager for the St. Louis and San Francisco "Frisco" Railroad, according to the city's website. Frisco Park was where trains would be loaded and unloaded, so the park has existed for basically as long as the city has, McCurdy said.

In addition to Frisco Stage, Frisco Park has benches, a pavilion, picnic tables, a playground and a farmer's market. It is the center of the annual Frisco Festival.

The Railyard Park will help bring together the east and west sides of Rogers, McCurdy said. The designs are final.

Several hundred people participated in public input sessions concerning the park, and more than 1,000 people completed an online survey, McCurdy said. People answered questions about what they use the park for and new things they would like to see.

"We're really excited to have something that's going to bring a new aesthetic and a new vibe and a place where people can go and have a place of rest, a place of activity, a place of many different things," said Sherry Puttkammer, owner of the The Dotted Pig, a gift shop and home decor store at 101 W. Walnut St. in downtown Rogers.

Puttkammer said she thinks the Railyard Park will help draw people downtown and help downtown businesses. Her only concern was if there would be enough parking.

Three to four parking spots will be lost because of the renovations, but the city plans to add more parking throughout downtown, McCurdy said. The Frisco Park redesign is only one of the plans to revitalize downtown. The city hired Nelson Nygaard Consulting Associates for $77,000 to study its downtown parking and streets and expects to have a complete design for downtown parking and streets by the end of the year. McCurdy said he was not sure exactly how many new parking spots there would be, but he estimates there will be around 200 new spots.

Dominic and Courtney Smith, owners of Dandy Roll, a home goods store at 107 W. Walnut St., said the Railyard Park will be good for downtown.

"We keep going back to the fact that downtown Rogers doesn't have a square," Dominic Smith said. "We don't really have a heart of downtown Rogers, and that's what their goal is -- to really create a space that's kind of the center where people want to go and then come off of that."

"The park is great, but it's tiny, and people don't get to utilize it as much, so this will make it space that can be utilized by everybody in downtown and everybody who visits downtown rather than just people who drive cars and want to park in the parking lot," she said.

Dominic Smith said he's excited about the stage because it will draw more people to the area in the evenings, adding that the seating area will allow for large groups and individuals. Having grown up in Rogers, it's great to come back as an adult and see the city putting forth money, time and effort into the redesign, he said.

Courtney Smith said the park redesign shows that the city is being progressive and moving forward. She grew up in Fayetteville and did not usually venture to downtown Rogers, but she said that is changing.

"Northwest Arkansas is becoming a central hub rather than four cities spread out. We're all kind of moving and growing together," she said.