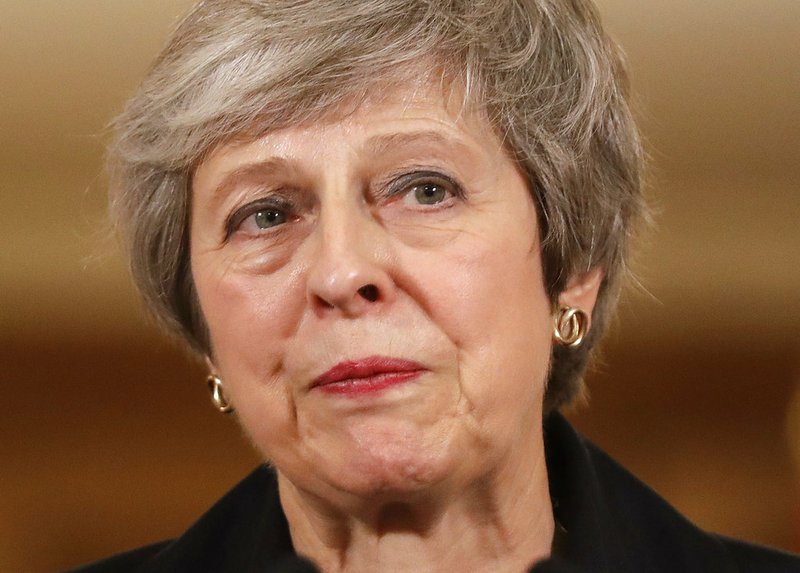 Britain's Prime Minister Theresa May speaks during a press conference inside 10 Downing Street in London, Thursday, Nov. 15, 2018. British Prime Minister Theresa May says if politicians reject her Brexit deal, it will set the country on "a path of deep and grave uncertainty." Defiant in the face of mounting criticism, May said Thursday she believed "with every fiber of my being" that the deal her government struck with the European Union was the right one. (AP Photo/Matt Dunham, Pool)

LONDON -- Prime Minister Theresa May said on Sunday that she would hold more talks in Brussels this week over Britain's withdrawal from the European Union while she battles twin threats at home: a possible no-confidence vote on her leadership and new resignations from her fractious Cabinet.

May faces a perilous few days after her draft agreement provoked two Cabinet resignations and such widespread objections from lawmakers of all political persuasions that the document looks unlikely to win Parliament's approval.

"This isn't about me," May said on Sky News. "This is about the national interest. The next seven days are critical."

Since Britons voted in 2016 to quit the European Union, May's Conservative Party has been split between those who want to keep close economic ties with the bloc and a more hard-line faction that wants a clean break.

But since an agreement on a draft deal on the process was announced, those arguments have exploded in public, leaving the government in disarray, Parliament seemingly deadlocked and the future uncertain after March 29, when Britain is scheduled to leave the European Union.

May said that she planned to visit the Belgian capital this week, before a summit meeting of EU leaders Sunday that was called to discuss the draft plan.

May dug deep in her television interview, as she has so often done during the EU-exit saga, insisting that she will not be deflected from her strategy.

"A change of leadership at this point isn't going to make the negotiations any easier, and it's not going to change the parliamentary arithmetic," she said. "What it will do is mean there is a delay to those negotiations and that's a risk that Brexit gets delayed or frustrated."

May is in the midst of the toughest week of her difficult premiership. Her former EU-departure secretary Dominic Raab, who resigned last week in protest over the deal, accused her of giving in to bullying from the EU. Other departure supporters are openly campaigning for a vote of confidence in her leadership, but are short of the number needed to start the process. And members of her Cabinet are meeting to discuss the changes they want to her deal.

In reality, May is unlikely to secure any concessions that address her critics' main fear: that Britain could be tied indefinitely to EU rules over which it has no influence and no clear escape route.

Yet further negotiations may at least buy her time to tamp down the crisis and produce promises for a longer-term trade plan that may be more palatable for hard-line exit supporters.

Also speaking on Sky News on Sunday, Jeremy Corbyn, the leader of the opposition Labour Party, appeared to soften his personal opposition to the idea of holding another referendum on the terms of an exit deal, including the option to remain.

His colleague Keir Starmer told The Observer newspaper that Labour would try to pass a law in Parliament to make it impossible to leave the bloc without a deal.

"If the prime minister's deal is rejected -- and that's looking increasingly likely -- Parliament will not just sit back and allow her to proceed," Starmer said.

The immediate focus in Westminster, however, is on whether May can keep her post. Hard-line exit supporters within the Conservative Party believe that they will soon have the 48 letters required to hold a no-confidence motion.

As the process is conducted in private, the only person who knows how close they are is Graham Brady, the chairman of the committee that oversees the election of Conservative Party leaders. In a BBC radio interview on Sunday, he didn't sound like someone on the brink of unleashing political chaos. He joked about trying not to count out loud when he was shopping, for fear of being misunderstood. And he said that while he had his own doubts about what May had negotiated, he didn't think replacing her would help.

"I have my own views about what is sensible and what isn't," Brady said. "Whether a leadership challenge or a confidence vote in the leadership would be helpful to the negotiating process at the moment. I think probably it wouldn't be. We are coming to the endgame of a very serious, very difficult negotiation."

He told the BBC that the threshold had not been met, but would not say exactly how many letters have come in, adding that he had not even shared that information with his wife.

He laughed off the "slightly offensive" idea that he might be suppressing letters in order to protect May, and said that if the threshold was reached, he would aim to hold the vote "expeditiously." So far the number of party members on record as having submitted letters is 23, though Sunday newspapers reported that others had done so in secret.

Even Raab said that he wouldn't be submitting a letter. "All of this leadership stuff is a total distraction from the historic moment that we're at," he said on the Andrew Marr Show on the BBC.

Raab urged the prime minister to prepare to leave the EU without a deal, saying that the long-term benefits would outweigh the short-term costs. "We would face some short-term disruption, but far better that than to put the long-term economic and democratic interests of the country at risk," he said.

Even if May's critics muster the number to force the vote, her supporters believe she could survive because her enemies do not agree on a successor and would have to persuade a majority of the 315 Conservative lawmakers to oust her.

But she also has trouble in her Cabinet, where her draft withdrawal agreement has been criticized by several ministers. Two have resigned so far, including Raab. If more Cabinet ministers quit, it would raise further questions about May's ability to carry on.

There remained little prospect on Sunday of May getting her deal through Parliament. Raab said he would vote against it, and Corbyn once again said it didn't deliver what the party wants. Brady told the BBC that it didn't look like May could win the vote "unless either the agreement changes or the statement of the political declaration for the future relationship gives considerably stronger grounds for optimism about the final nature of the deal."

When she travels to Brussels, May is unlikely to secure any significant changes to the terms of the draft agreement. These include Britain's fee for leaving the union, the rights of EU citizens living in Britain and vice versa, and plans to prevent physical checks at the border between Northern Ireland, which is part of the United Kingdom, and Ireland, which will remain in the European Union.

European officials have made it clear that they are in no mood to reopen the withdrawal agreement, but there is scope for negotiation over a vaguer, nonbinding agreement on long-term trade -- something that May could use to win over critics.

For now, there seems to be agreement on only one thing: A crucial moment is approaching for Britain.

Information for this article was contributed by Stephen Castle of The New York Times and by Robert Hutton, Nikos Chrysoloras and Nishant Kumar of Bloomberg News. 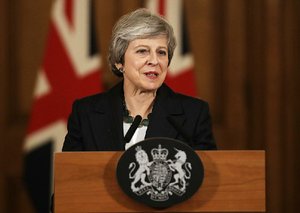 Photo by AP POOL
Britain's Prime Minister Theresa May speaks during a press conference inside 10 Downing Street in London, Thursday, Nov. 15, 2018. Two British Cabinet ministers, including Brexit Secretary Dominic Raab, resigned Thursday in opposition to the divorce deal struck by Prime Minister Theresa May with the EU — a major blow to her authority and her ability to get the deal through Parliament.