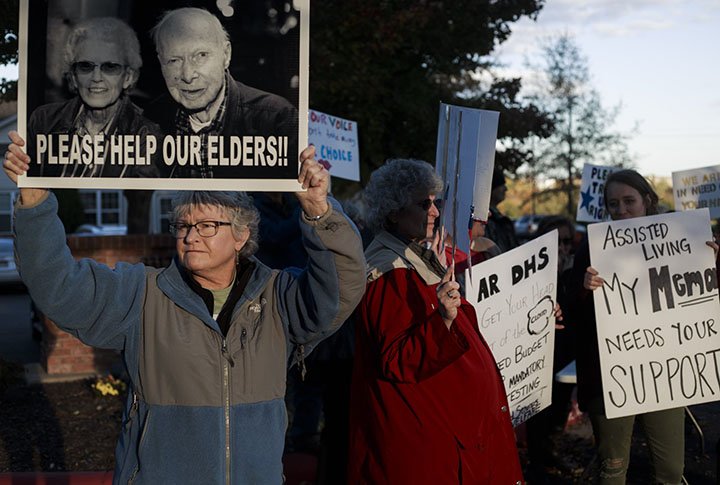 Marilyn Knapp of Fayetteville (left) holds a sign showing her parents during a rally Nov. 2 at the Gardens At Osage Terrace in Bentonville. About 70 concerned family members attended a rally to protest the proposed DHS rules concerning provider care, rates and changes in the assisted living homes, which is being pushed to be revised and reviewed in a short period of time. “If this amendment goes through as is, they’ll potentially be displaced and I don’t know where they’re going to end up. They may go to a nursing home or they may go with me,” Knapp said.

BENTONVILLE -- Two assisted living centers in Bentonville could be forced to close if a proposed change in state regulations gets final approval, according to the nonprofit group that operates them.

The threat isn't exaggerating, said Herb Sanderson, director of AARP in Arkansas. AARP is a lobbying group for the aging population.

"They are in a uniquely bad position," Sanderson said of Legacy Village and Osage Terrace Gardens in Bentonville. The proposed changes go before the regulations subcommittee of the state Legislative Council on Dec. 18.

About 100 residents of the two centers would have to find new homes, according to Casey Kleinhenz, director of the Community Development Organization of Bentonville-Bella Vista. Most would have to go to more-expensive nursing homes under the rule changes, he said.

The proposed changes concern long-term health care such as assisted living and nursing homes. In all, there are 600 pages of revised regulations, which were released for public review and comment in October.

Arkansas' $80 average compares to an average of $40 in Texas and $42 in Oklahoma, but Arkansas sets much higher standards for care, Douglas said. For instance, Texas allows as little as 120 square feet of living space for two residents, he said. Arkansas requires at least 230 square feet.

The "uniquely bad position" of the Bentonville centers is they were built using federal low-income housing tax credits. Such financing requires those centers to take in residents who are Medicaid recipients who cannot afford to pay the full cost themselves.

About 70 percent of the residents of Legacy Village and Osage Terrace Gardens depend on Medicaid, Kleinhenz said. The two centers cannot accept a larger portion of private paying clients without violating the terms of their financing, Derrick Rose confirmed. Rose is public information director for the Arkansas Development Finance Authority. The finance authority administers the tax credit program in Arkansas. To get the financing, the Bentonville organization agreed to always accept low-income residents to the facilities, he said.

Legacy Village opened nine years ago, and Osage Terrace opened 16 years ago this month, according to Kimberly Goins, administrator at Osage Terrace.

There are 96 assisted living facilities in Arkansas accepting at least some Medicaid patients, according to records obtained by Douglas. Those facilities house about 5,900 residents and about 1,200 of those are Medicaid recipients, the figures show. How many of those facilities were built with federal tax credit financing is a figure neither D0uglas nor Rose could provide, but Douglas said he believes no more than five are in the financing predicament, including the two in Bentonville.

Even if the Bentonville centers could afford to keep operating at the reduced reimbursement rate, other changes in the proposed regulations would require most of the residents to go to nursing homes anyway, according to Kleinhenz, Douglas, Sanderson and Goins. The new regulations would require nursing home care for a variety of health conditions now managed in assisted living, Kleinhenz and Goins said.

The federal Center for Medicare and Medicaid Services, commonly referred to as CMS, is demanding states justify their reimbursement rates, according to a statement issued by the state Department of Human Services.

"DHS review revealed the rates were set back in or around 2002 as a product of negotiations between the agency and providers at that time," the statement said. "That agreement included around a 3 percent increase each year, so it has continued to grow based on that agreement until 2016 when DHS discontinued automatic increases and assured CMS we would develop a rate supported by evidence."

"The problem with assisted living facility rates started back in 2002 when the state created an initial high rate without detailed cost data, and then inflated those rates for several years," Bunch said. "States must reassess the economic soundness of these rates every five years. That was not done until this year."

Federal regulators put their foot down in late 2015, Bunch said, demanding "the actuarial, data-based justification for whatever new rate DHS ultimately proposed." The regulators were explicit in their demand, she said.

"The new rate would have been much lower -- a cut of 40 percent or more -- had DHS chosen to follow earlier actuarial analyses," Bunch said. "We were successful in arguing against the use of those proposed rates. DHS agreed with us that these analyses were not right. While the current proposed rate is a significant reduction, it is the highest amount identified in all the recent actuarial work."

"CMS asked us to explain our reasons for the higher rate," Douglas said. "There are good reasons. We require a registered nurse to be on staff at these centers. Texas and Oklahoma do not. We require these facilities to be built to the same standards as nursing homes. Other states do not. Building to nursing home standards costs $250 to $300 a square foot. In Oklahoma, you could find a vacant hotel built in the 1950s, buy it for $10 a square foot and call it an assisted living center."

So are Arkansas standards too high? No, Douglas said. Those standards safeguard a vulnerable population at about half the cost of nursing home care.

"There is no way you can take people out of assisted living, put them in a nursing home and save money," Douglas said. "I don't see how this rule change benefits anyone but nursing homes," citing the $145-a-day average for nursing home care.

Facilities like those in Bentonville had to be built on the basis of Arkansas' higher standards and the reimbursement rates were a vital part of the calculation of whether to build them, Douglas said.

Family members of assisted living residents face the most wrenching problems of all, said Marilyn Knapp of Fayetteville. Her parents, Wayne and Norma Rossow, were reluctant to leave home and only moved to Osage Terrace in April. Their situation demanded the move as Mr. Rossow's Alzheimer's worsened and her mother developed problems with arthritis in her back, Knapp said.

"Now they have no house to go back to," Knapp said.

Even if the family could afford private pay or if her parents were forced into a nursing home -- with no guarantee they would remain in the same rooms after 61 years of marriage -- most facilities have a waiting list, Knapp said. If the rule went into effect on such short notice as the first of the year, the Rossows would have nowhere to go.

"This is definitely affecting a lot of people in Arkansas, and two of them are people I love," Knapp said.

The Legislative Council can only reject a rule if it finds the proposed change would violate either the law or legislative intent, said Rep. Jim Dotson, R-Bentonville, House co-chairman of the council.

Dotson is aware of the situation with the Bentonville homes and encouraged everyone involved to make their comments during the public comment period on the regulations, which ended last week, he said. Hopefully the comments of Kleinhenz, Sanderson and others will have an impact on the final draft of the rules before they go to the council, he said.

There are 63 people employed at the two centers, Goins said.