A former mayor of Magness and his wife -- who have been indicted on numerous charges, including conspiracy to commit mail fraud -- will appear in court later this month.

The couple was indicted Nov. 8, according to court documents.

Investigators said Gregory Pectol used his farmland in northeast Arkansas to grow commercial crops, including soybeans, wheat and rice. The former mayor used his leased farmland to obtain loans from Merchants and Planters Bank in Newport. He also maintained a checking account with that bank that he used to pay expenses and deposit proceeds from his farming business.

Under the Merchants and Planters loan agreement, the Pectols agreed that the financial institution would have a priority lien on any of their crops and crop proceeds until the couple paid back the loan.

Gregory Pectol frequently sold crops to Riceland Foods Inc. and maintained membership and marketing agreements with the company. As part of those agreements, Gregory Pectol agreed to notify Riceland of any liens or third-party interests in the sold crops and the interest any other party may have in those crops. That agreement also provided Riceland a mailing address to send payments, which was registered to Gregory Pectol.

A relative (identified in documents as G.C.) of Gregory Pectol also received a crop loan from Merchants and Planters Bank, and it was secured by a lien on any crops grown with the loan funds as well. Riceland also maintained a membership and marketing agreement with the relative. According to the indictment, Riceland had a document that G.C. had signed, but the signature had been forged.

G.C.'s membership and marketing agreements provided Riceland an address to send payment, but the post office box was actually registered to Gregory Pectol, the indictment states.

Investigators said that from May 2012 through September 2015, the Pectols conspired with each other to devise and participate in a scheme to defraud and obtain money by means of false representation and knowingly caused checks to be delivered by mail to the wrong address.

Gregory Pectol would receive checks from Riceland made payable both to him and the bank. The indictment claims he would alter and manipulate a portion of these checks by tearing the check and erasing the bank's name to make it appear that the company's authorization was not required to deposit the check.

Gregory Pectol would then deposit the check and evade the bank's lien on his crops and avoid repayment on his loan, resulting in losses for the company, the indictment said.

Investigators said that to disguise the transactions, Gregory Pectol wouldn't deposit the altered checks into his farm-related Merchants and Planters Bank account, but instead into an account -- one that belonged to another relative, identified as E.P. -- at First Community Bank in Batesville.

Investigators said Gregory Pectol also altered and manipulated checks that were made payable to G.C. The records stated that Pectol would forge his relative's signature and deposit that money into the account at First Community Bank as well.

Candace Pectol also would sign and endorse the checks, knowing they had been altered and manipulated, the indictment states.

To avoid detection, investigators said, between May 2012 and September 2015, Gregory Pectol properly negotiated at Merchants and Planters Bank a portion of the Riceland-issued checks by obtaining signatures from the bank representative and negotiating the checks at that bank.

He then wrote checks, totaling approximately $400,000 from the First Community Bank account to himself, some of which he then deposited into his own accounts, including the farm-related account at the Merchants and Planters Bank in Newport.

The indictment connects Gregory Pectol to 24 counts of mail fraud and goes through the date and amount of money involved in each transaction.

Investigators said that in September 2017, Candace Pectol attempted to delay and prevent a witness from testifying before the federal grand jury. She tried this on Sept. 5, Sept. 13 and Sept. 27, according to court documents.

The Arkansas Municipal League website no longer lists Gregory Pectol as mayor of Magness, but it doesn't clarify when he was replaced. 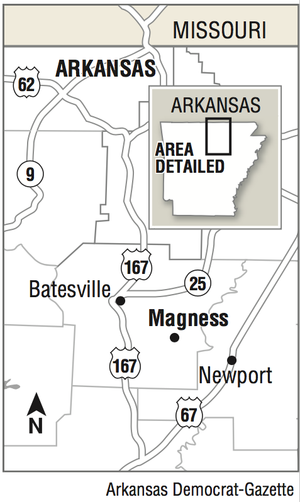