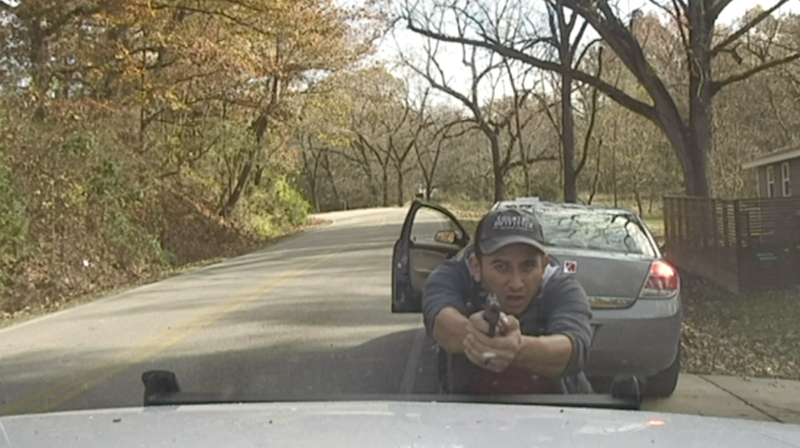 SPRINGDALE -- The Washington County Sheriff's Office released dashcam video of a shooting during a traffic stop Sunday in Tontitown.

The incident started at 12:43 p.m. after Washington County Cpl. Brett Thompson attempted to pull over a green Saturn driving north on South Barrington Road near Steele Road in Tontitown for a traffic violation, according to a Washington County Sheriff's Office news release. The area is south of U.S. 412 and west of Interstate 49.

Luis Cobos-Cenobio, 29, of 1337 Shannon St. eventually stopped the car on Steele Road. When Thompson got out of his patrol vehicle, Cobos-Cenobio opened his car door and began shooting, at which point Thompson returned fire.

Cobos-Cenobio fled, then stopped a short distance later and let a female passenger out of the car before taking off again.

A Springdale police officer spotted the car at 1:11 p.m. north of Lake Fayetteville. Cobos-Cenobio again shot at officers, according to the Springdale release.

The Fayetteville Police Department and Arkansas State Police joined the chase that went into Fayetteville and back to Springdale. Cobos-Cenobio stopped the car and surrendered to police.

Cobos-Cenobio faces four charges of attempted capital murder and one charge each of fleeing, terroristic act, possession of a controlled substance and possession of drug paraphernalia.

Two police officers were placed on administrative leave pending the investigation, as is standard protocol in these incidents, according to the release.

*The audio was edited to remove expletives.