Customs closing lanes at crossing to prepare for migrants by MARIA VERZA The Associated Press | November 14, 2018 at 4:00 a.m. 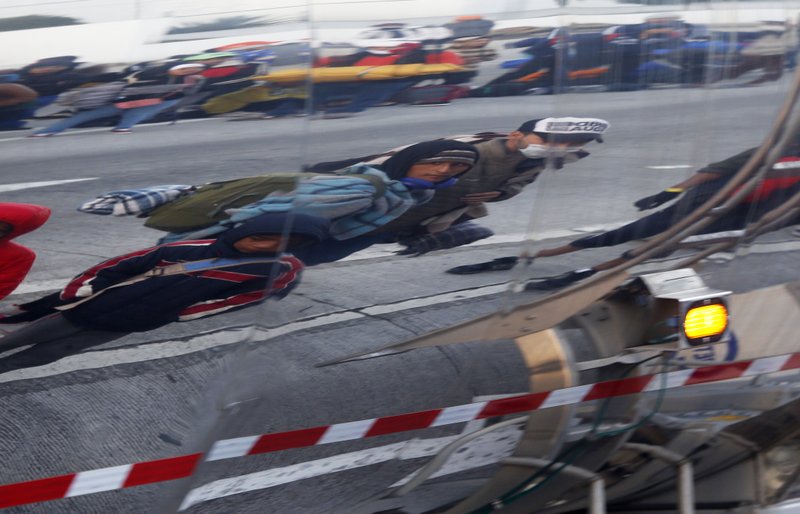 Central American migrants who are traveling as a caravan toward the U.S. border are reflected on the side of a large cargo truck as they leave Guadalajara, Mexico, Tuesday, Nov. 13, 2018. (AP Photo/Marco Ugarte)

GUADALAJARA, Mexico -- The U.S. government said it was starting work Tuesday to "harden" the border crossing from Tijuana, Mexico, to prepare for the arrival of a migrant caravan making its way across western Mexico.

Customs and Border Protection announced it was closing four lanes at the busy San Ysidro and Otay Mesa ports of entry in San Diego, Calif.

It said the closures were needed "to install and pre-position port hardening infrastructure equipment in preparation for the migrant caravan and the potential safety and security risk that it could cause."

That still leaves a substantial path for the tens of thousands of people who cross daily: Twenty-three lanes remain open at San Ysidro and 12 at Otay Mesa.

A group of several hundred migrants moving ahead of the caravan made it to Tijuana on Tuesday aboard a fleet of buses.

The caravans became a campaign issue in U.S. midterm elections and President Donald Trump has ordered the deployment of over 5,000 military troops to the border to help fend off the migrants.

To the thousands of Central American migrants making their way toward Mexico's Pacific coast state of Nayarit, the prospect of meeting a hostile reception at the border is nothing new.

After a month on the road, through three countries, migrants like Maribel, 22, from La Ceiba, Honduras, are used to tough conditions.

Maribel, who did not want her last name used for fear of reprisals in Honduras, pushed a baby carriage with her 1-year-old daughter while her husband pushed another with their 3-year-old son along a highway leading from Guadalajara to the Nayarit state capital of Tepic. Few trucks passed, and migrants felt stranded.

"We are well aware of everything Trump has been saying," said Maribel. "Let them close whatever they want to close, but we are going to get through anyway."

About 1,300 migrants in a second caravan arrived in Mexico City, where they had their first day of rest in weeks Tuesday.

Roberto Hernandez, 39, a bricklayer from San Pedro Sula, Honduras, was finally able to get a shot of antibiotics for the fever he has had for two weeks. He was staying at the same tent shelters set up for the first caravan at a sports stadium in Mexico City.

"Ever since I left home I knew it wasn't going to be easy," said Hernandez, who sobbed quietly as he thought of the two sons, Mateo and Steven, he left at home. "They can put a million soldiers or whatever they want on the border, we are going to make the attempt to get across."

But things were especially tough for the first caravan. The estimated 6,000 Central Americans left shelters in Guadalajara early Tuesday and were taken by bus to a highway tollbooth to wait for rides to their next destination.

They thought other buses would be waiting for them to take them through hurricane-ravaged Nayarit to the neighboring state of Sinaloa, farther north. But no other buses showed up and few trucks passed to pick them up, leaving many to walk the 60 miles to the state line.

Late Tuesday, hundreds were still stranded at the toll plaza and bedding down in its side lanes for the night.

Cristobal Sanches, an activist traveling with the caravan, said Jalisco state officials had promised Monday night to take the migrants to the border with Nayarit. Some migrants initially refused to get off the buses that took them to the toll plaza, but police arrived and threatened them to exit the buses.

Jalisco Gov. Aristoteles Sandoval said the state had never agreed to transport them to Nayarit.

"There was never any suggestion of supporting them economically," Sandoval said. "They wanted to be taken to another state, that can't be done."

Information for this article was contributed by Mark Stevenson and Elliot Spagat of The Associated Press.