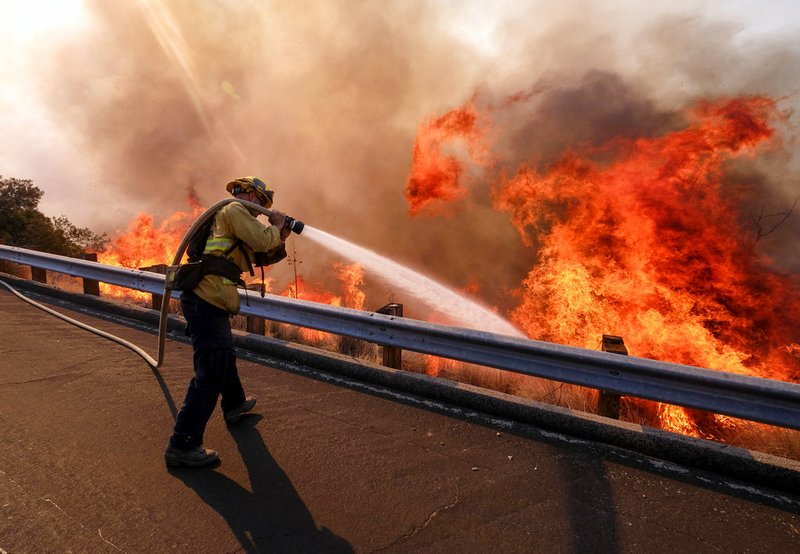 MALIBU, Calif. -- Southern California's huge wildfire roared to life again Tuesday in a mountain wilderness area even as many neighborhoods were reopened to thousands of residents who fled its advance last week.

A massive plume rose suddenly at midmorning in the Santa Monica Mountains near the community of Lake Sherwood, prompting authorities to send aircraft to drop retardant and water on the blaze.

Forecasters had warned of continuing fire danger in Southern California due to persistent Santa Ana winds, the withering, dry gusts that sweep out of the interior toward the coast, pushing back moist ocean breezes.

Except for an apartment building that burned overnight in coastal Malibu, there was little sign of fire activity elsewhere in the vast fire zone west of Los Angeles.

Officials said their most recent assessments indicated that the fire burned 435 buildings as it spread over about 146 square miles (378 square kilometers) and was 35 percent contained, with full containment expected Thursday.

It was unclear how many people remained under evacuation orders, though at one point the number hit about 250,000. Authorities were expected to disclose details later Tuesday at a news conference.

The dry, gusty winds were expected to blow through Wednesday, although not quite as furiously as last week. Winds, coupled with higher average annual temperatures, tinder-dry brush and a lack of rain in recent years, make the "perfect ingredients" for explosive fire growth around the state, said Chris Anthony, a division chief with the California Department of Forestry and Fire Protection.

"I've been doing this job for 31 years and probably in the last five, maybe seven years, every year seems to get worse," California Fire Chief Scott Jalbert told The Associated Press.

Fire officials lifted evacuation orders early Tuesday in all or parts of about five communities in Ventura and Los Angeles counties.

But large, populated areas remained off-limits and authorities warned residents of those areas to stay out, saying there were hazards including downed power lines, embers that could re-ignite, buckled roads and lack of power and communications.

Relief and heartache awaited those who were allowed to return home Monday. Paul Rasmussen, his pregnant wife and 6-year-old daughter fled their mountainside Malibu home Friday for what they thought would be the last time.

Paul Rasmussen gasped Monday as he rounded corners on the road home that revealed the extent of damage with more than a dozen nearby houses reduced to rubble. But their home survived. His next-door neighbor, Randy Berkeley, protected his home and the Rasmussens' house.

Berkeley and his wife, Robyn Berkeley, choked back tears as they recounted their ordeal holding back a 100-foot wall of flames and then repeatedly beating back hot spots that continued to flare up throughout the night and next day.

The couple and their 25-year-old son, Colin, used hoses, buckets of water and chain saws to battle flames and cut back brush as the fire kept coming to life.

"Just when you think everything is dying down, everything keeps coming back," Randy Berkeley said.

The two people killed in the fire were adults found last week in a car overtaken by flames a couple miles from Rasmussen's house. They have not been identified. Those fatalities added to California's growing wildfire-related death toll.

At least 42 people were confirmed dead in the wildfire that obliterated the Northern California town of Paradise , making it the deadliest wildfire in recorded state history. The search for bodies continued.

The cause of the Southern California fires remained under investigation.

Southern California Edison reported to the California Public Utilities Commission "out of an abundance of caution" that there was an outage on an electrical circuit near where the fire started Thursday. The report said there was no indication its equipment was involved in the fire reported two minutes after the outage.

Downed powerlines and blown transformers have been blamed for several of the deadly fires that have burned in recent years.

California regulators said initial testing found no elevated levels of radiation or hazardous compounds after the fire burned near a former nuclear test site in hills northwest of Los Angeles.

The state Department of Toxic Substance Control said its staff went to the site known as the Santa Susana Field Laboratory on Saturday and found that facilities that previously handled radioactive and hazardous materials were not affected by the Woolsey fire.

The organization Physicians for Social Responsibility said in a statement Monday that it was likely that smoke and ash from the fire spread radiological and chemical contamination that was in soil and vegetation.

The site was used for decades for testing rocket engines and nuclear energy research. One of its nuclear reactors had a partial meltdown in 1959 and battles over decontamination efforts have gone on for years, with neighbors blaming illnesses on the site.