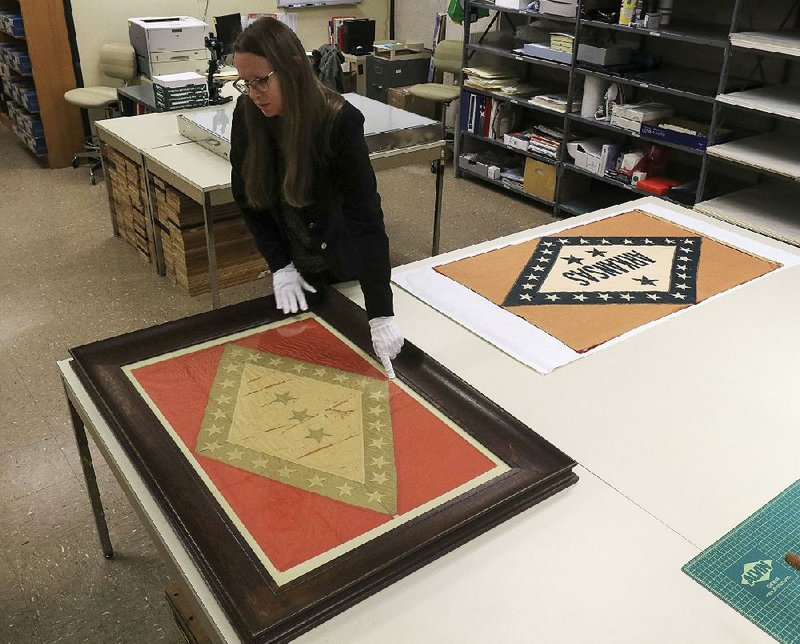 Julienne Crawford, curator at the Arkansas State Archives, talks about the repairs that conservators will make to two early Arkansas state flags, including the original state flag on the left that dates to 1913. - Photo by Staton Breidenthal

After stretching the fingertip of a white glove to snap it in to place, State Archives Curator Julienne Crawford turned to a low, flat table and gingerly touched the corner of a wooden frame that encased Arkansas' original state flag.

The lights in the room were dimmed to a twilight and the air was crisp deep inside the Multi-Agency Complex building behind the state Capitol.

The 1913 shattered-silk, 24-inch-deep flag with a 36-inch-wide fly (the part extending from the flagpole) was deeply wrinkled behind the frame's glass. The thinning fabric's colors were faded and the flag sagged in the frame. The center white diamond had vertical splits throughout.

Crawford and state preservationists are preparing the flag -- as well as another early 1900s state flag that was stretched out, unframed on an adjacent table -- for transport to West Virginia next year for an estimated $20,000 makeover.

The refurbishing is financed by a grant from the Arkansas Natural and Cultural Resources Council. The council, founded in 1987 by the Arkansas Legislature, awards its funds for the acquisition, management and stewardship of state-owned lands or the preservation of state-owned historic sites, buildings, structures or objects.

Melissa Whitfield, communications director for the Department of Arkansas Heritage, said the flag's restoration fits perfectly with the council's mission.

"What can be more iconic than the original Arkansas state flag?" Whitfield said. 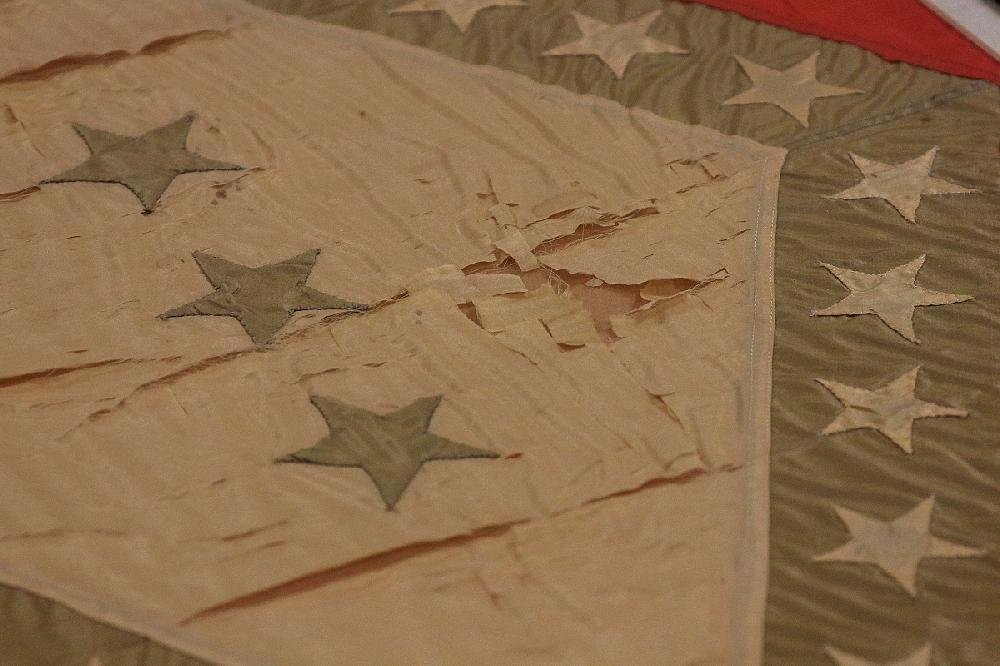 A conservation team from Ranson, W.Va.-based Textile Preservation Associates Inc. will try to repair the damage to the original state flag.

Crawford gently flipped the heavy frame and pointed to the backing.

"We found plans printed on here for the design of the state Capitol grounds," she said, wide-eyed.

The faded drawing on the backing depicts the grounds with a maze of winding paths bordered by dozens of trees. The middle shows the Capitol.

Textile Preservation Associates Inc. of Ranson, W.V., will preserve the drawing, Crawford said, and the state will add it to its cache of historical displays.

The flags will remain at the State Archives until they can be transported to the conservator. Textile Preservation Associates has a waiting list and will notify Crawford when it's time to put the flags on the move.

The flags will be carefully crated to protect them en route and will be delivered either by a State Archives employee or a professional art shipping service, Crawford said.

The original flag has been encased in glass since 1916. Until the conservation team members start the dismantling process, they won't know how exactly the flag was adhered to the display -- or how difficult it will be to remove the adhesive.

The matboard covers the edges of the flag, but at least eight pieces of linen tape can be seen attached to the perimeter of the flag.

Once the flag reaches West Virginia, the preservation team will test the linen tape to find the most effective and safest solvent or they will resort to another method of removal. When the flag is free of its frame, it will be vacuumed to remove surface contaminants, then humidified with distilled water to remove the wrinkles.

The fibers, fabrics and sewing threads will be carefully examined and documented in a report with photographs.

The damaged fabric that comprises the white diamond will be sandwiched between two layers of sheer synthetic fabric, then hand-sewn, cutting away the fabric from the blue stars.

Once the repair work is completed, the flag will be placed on a buffered, acid-free panel that will be covered with polyester batting and unbleached fine cotton fabric. The flag will be adhered to the panel with a row of silk-thread stitching across the top.

An ultraviolet filtering glazing -- special glass that reduces light exposure -- will be laid over the flag, applying a light pressure to the fabric. The entire unit will be placed in a custom-made pressure-mount frame with a supporting aluminum back and an outer frame of cream beige aluminum.

The other flag -- which was donated to the state in 1916 and was encased in a frame until 2006 and secured in place using nails -- will go through much the same restorative process, then encapsulated in a pressure-mounted frame.

The second flag differs from the original state flag in that it is made from a heavy cotton fabric and "Arkansas" is appliqued in dark blue Gothic lettering across the center white diamond.

The fabric is badly faded and lines suggests that it was subjected to moisture at some point. There are holes and splits in the top fly corner and the bottom third of the flag is torn away from the hoist.

According to the contract with Textile Preservation Associates, both flags should be ready to return home in June.

The process is painstaking and takes time, Crawford said. More than 75 percent -- or $15,200 of $20,154 -- of the contract is for labor. Multiple calls to Textile Preservation Associates for comment were not returned.

In 1912, just nine months before the commissioning of the U.S. Navy's newest battle ship, the USS Arkansas, the Pine Bluff chapter of the Daughters of the American Revolution launched a statewide design contest to create the state's first flag.

Hocker's creation was a red flag with a white diamond in the middle containing three blue stars and bordered with a blue band containing 25 white stars.

The diamond represents the state's diamond mine in Murfreesboro while the three middle stars represent France, Spain and the United States -- the three nations whose flags had flown over the state -- and the 25 white stars signify Arkansas's place as the 25th state admitted to the Union. A fourth star was added to the center by the Legislature in 1923 to represent Arkansas being in the Confederacy.

The origins of the second flag -- this one with the same design except with "ARKANSAS" emblazoned across the white diamond -- are more obscure. It was "probably donated by L.E. Sawyer or Earle W. Hodges in about 1915 or 1916," Crawford said.

Two separate 1916 donation certificates list a flag donated by each of the men.

Hodges, of Little Rock, was the chairman of the selection committee for the flag design. He became the youngest secretary of state when he was elected at the age of 28. He ran for governor in 1916, but was defeated by Gov. Charles Brough.

Crawford said both flags may be displayed temporarily once they return to the state.

"Due to preservation concerns about light exposure, the flags will only be on display for short periods of time," she said. "There may be future exhibits that the flags will be displayed in when they complement the subject matter."