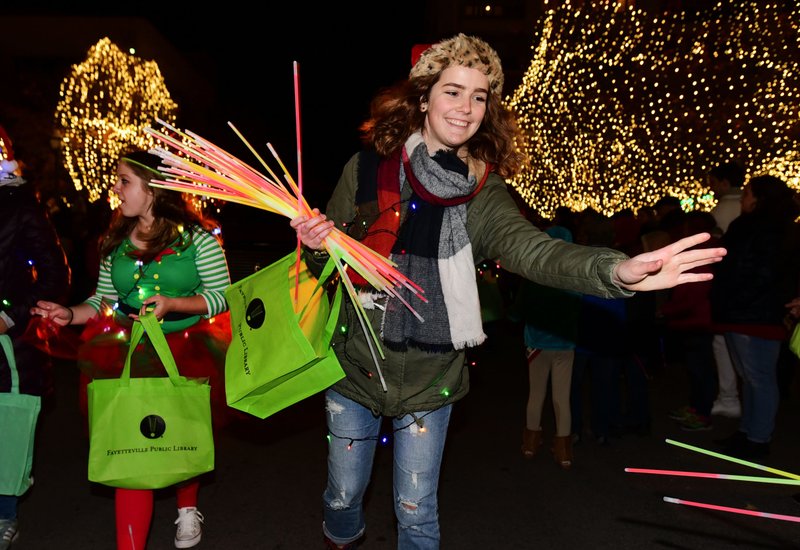 File Photo/DAVID GOTTSCHALK Sarah Howard tosses glow sticks during a previous Lights of the Ozarks parade on the square in Fayetteville. This year's festivities are set for Nov. 16.

As usual, the cities of Northwest Arkansas are kicking off the holidays in style. Bring your jingle bells and don't miss a minute of the holly, jolly fun.

Over the course of six weeks, Santa's helpers in Fayetteville have worked a total of 2,000 manhours to hang the 350,000 LED lights that turn the Fayetteville square into a glittering holiday wonderland, says Experience Fayetteville's Dacre Whitaker. And that's not to mention the 400 hours to remove them! "Each year we change the display for excitement," she promises. This year's parade -- which kicks off the official square lighting -- will feature 40 participants and Santa Claus himself.

Lights of the Ozarks

WHERE -- Downtown Fayeteville square; the parade will begin at the West Avenue parking lot and end at the city of Fayetteville employee parking lot at 211 W. Mountain St.

A Springdale tradition, the Christmas Parade of the Ozarks, this year titled the "March of the Toys," starts at Parsons Stadium and moves west down Emma Avenue with music, lights and, of course, Santa making the evening extra special.

Christmas Parade of the Ozarks

WHERE -- Parsons Stadium down Emma Avenue in Springdale

"This is the 35th Rogers Christmas Parade, and we're probably the biggest in the area," says Main Street Rogers' executive director Shey Bland. Bland says the parade will have "100ish" walking groups and vehicles participate and, as always, the parade ends with the man himself, Santa Claus. "People get set up early to get their spots," warns Bland. The parade starts at 6 p.m., but there will be some pre-parade festivities on the Frisco Stage, says Bland.

Bentonville's holiday celebrations are divided into two separate events. First up, on Nov. 17 at noon the ice rink at Lawrence Plaza opens, the square lights are officially turned on at 6 p.m., and the Lawrence Plaza Christmas tree is lighted at 6:30 p.m. A few weeks later, on Dec. 8, the Bentonville Christmas parade starts at 11 a.m. at the Fire Station and moves up Main Street to the square.