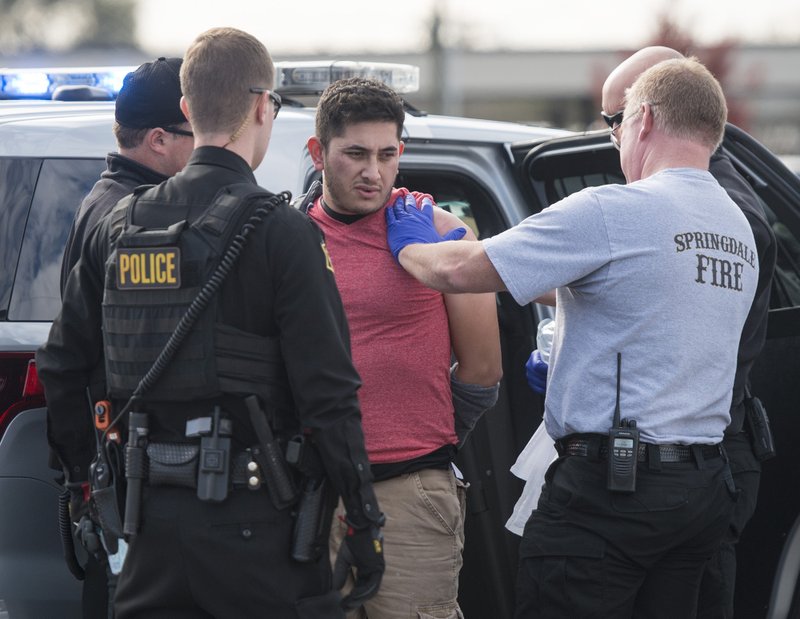 NWA Democrat-Gazette/BEN GOFF Medics from the Springdale Fire Department treat a man wearing handcuffs Sunday, Nov. 11, 2018, at the scene of a shooting on Don Tyson Parkway near the intersection with South Thompson Street in Springdale.

Police arrested Luis Cobos-Cenobio, 29, who had what appeared to be a non-life-threatening gunshot wound to his shoulder, according to a Springdale Police Department news release. No police officers were injured.

The incident started at approximately 12:43 p.m. when Washington County Cpl. Brett Thompson attempted to pull over a green Saturn driving northbound on South Barrington Road near Steel Road in Tontitown for a traffic violation, according to to a Washington County Sheriff's Office news release. The area is south of U.S. 412 and west of Interstate 49.

The Saturn eventually stopped on Steele Road. When Thompson got out of his patrol vehicle, the driver of the Saturn opened his car door and began shooting, the Washington County release states. Thompson returned fire and the suspect took off again, but stopped a short distance later and let a female passenger out of the vehicle before taking off again, according to the release.

A Springdale Police officer spotted the Saturn at about 1:11 today near the intersection of Don Tyson Parkway and Thompson Street, north of Lake Fayetteville. The suspect, later identified as Cobos-Cenobio, once again shot at officers who returned fire, according to the Springdale release.

The chase went into Fayetteville before looping back into Springdale. The Fayetteville Police Department and Arkansas State Police joined the chase, the release states.

Cobos-Cenobio returned to the area of Don Tyson Parkway and Thompson Street and immediately surrendered to police, the release states.

The suspect was treated at Northwest Medical Center and later transferred to the Washington County Jail. No booking information was available at 5:30 p.m. today.

Two Springdale Police Officers have been placed on administrative leave pending the investigation, as is standard protocol in these incidents, Capt. Derek Hudson with the Springdale Police Department stated in the release.