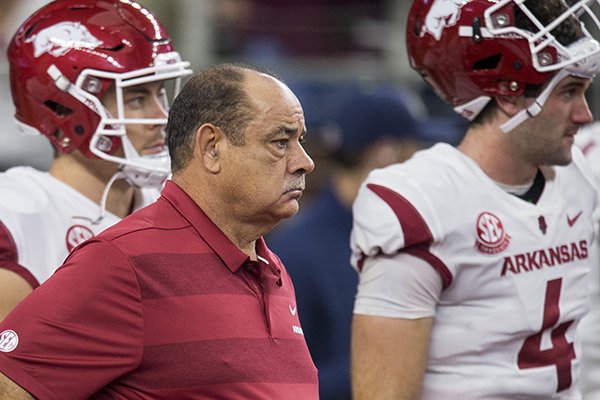 Arkansas defensive coordinator John Chavis watches warmups prior to a game against Texas A&M on Saturday, Sept. 29, 2018, in Arlington, Texas.

FAYETTEVILLE — Arkansas did its best to try to flip junior college linebacker Lakia Henry from one SEC school to the Hogs during his official visit, and it appears they made a strong case.

“It was really interesting,” Henry said. “I really enjoyed myself.”

Henry, 6-1, 225 pounds of Dodge City Community College in Kansas, committed to Tennessee in May. He officially visited the Volunteers last weekend before making his way to Fayetteville Friday through Sunday.

He gave his thoughts on Arkansas and his recruiting process.

“They came in kind of late,” Henry said. “It’s a really nice place. I really have to look at my options more differently now, but I’m still committed to Tennessee, but we’ll see what goes on.”

The highlight of the trip was watching the Hogs' defense under defensive coordinator John Chavis line up against LSU.

The Razorbacks have a plan for Henry if junior linebacker De’Jon Harris stays or leaves after this season.

Henry, who recorded 110 tackles as a freshman, had 77 tackles, 5.5 tackles for loss, a sack, an interception and 2 pass breakups this season.

The surprise of the trip is a familiar theme of so many recruits who visit Arkansas.

“The facilities were nicer than what I thought they were going to be,” Henry said.