Eagles wideout up on Cowboys rivalry 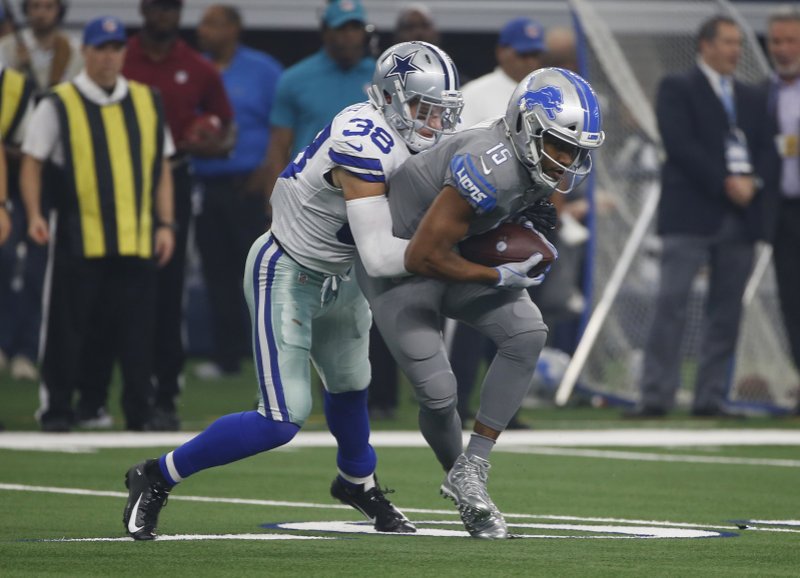 In this Sept. 30, 2018, file photo, Dallas Cowboys defensive back Jeff Heath (38) tackles Detroit Lions wide receiver Golden Tate (15) during the first half of an NFL football game in Arlington, Texas. Tate, the playmaking wide receiver acquired by the Philadelphia Eagles from Detroit last week, will make his debut with the Eagles against the Cowboys on Sunday night. (AP Photo/Ron Jenkins, File)

Tate, the playmaking wide receiver acquired from Detroit last week, will make his debut with the Philadelphia Eagles (4-4) against the Dallas Cowboys (3-5) tonight.

"I've read my social media, so our fans have expressed the passionate dislike of the Cowboys," Tate said. "It's going to be a great game. I'm happy that my first game gets to be at home against such an intense opponent."

Tate had his best game this season against the Cowboys, catching 8 passes for 132 yards and 2 touchdowns on Sept. 30.

"I think it gives me an advantage," Tate said. "I've seen those guys. They are going to run the same defense, and I'm on another team with a completely different playbook."

The defending Super Bowl champion Eagles are coming off a bye week and trail the Washington Redskins (5-3) in the NFC East. The Cowboys are reeling following a 28-14 loss at home to Tennessee on Monday night.

"One hundred percent, it's a must win," running back Ezekiel Elliott said. "Being a division game, that makes it that much more important. Must win."

When Dak Prescott led the Cowboys to a 13-3 record in 2016 while fellow rookie Carson Wentz was 7-9 with the Eagles, some thought Dallas got the better franchise quarterback -- and in the fourth round. The Eagles traded a slew of draft picks to move up and select Wentz at No. 2 overall.

But since then, Prescott is 12-12 with 32 TDs, 18 interceptions and an 87.4 passer rating. There are even questions whether he's going to be the long-term answer in Dallas.

Meanwhile, Wentz is 14-5 with 46 TDs, only 9 interceptions and a 104.5 rating in the past 2 seasons, though he missed last year's playoffs after tearing his ACL. He's undoubtedly the present and future in Philadelphia despite having to watch Nick Foles lead the team to its first NFL title since 1960.

The difficulties continue for Dallas' once-vaunted offensive line, which has surrendered 28 sacks of Prescott, just four shy of his career high halfway through the season. Rookie left guard Connor Williams had arthroscopic knee surgery after getting hurt in the loss to Tennessee and will miss at least one game.

The Cowboys appear set to leave Joe Looney at center. He's been there all season in place of four-time Pro Bowler Travis Frederick, out with a nerve disorder. If Looney stays put, left guard will be filled by either Adam Redmond or Xavier Su'a-Filo.

Eagles rookie tight end Dallas Goedert will face the team he was named after for the first time.

Philadelphia traded up in the second round and moved ahead of the Cowboys to select Goedert, who would've helped replace retired Jason Witten in Dallas. Goedert has 18 receptions for 188 yards and 3 TDs while teammate Zach Ertz ranks first among tight ends with 61 catches.

Goedert will hear plenty of "Dallas stinks!" chants and worse. He knows fans won't be referring to him.

The Cowboys are awaiting the return of defensive end Randy Gregory, who had knee surgery similar to Williams before the bye week and missed the last game. He was listed as limited in practice early in the week. Taco Charlton injured a shoulder against Tennessee and didn't practice to start the week. Defensive tackle David Irving, out the first four games on a substance-abuse suspension, is likely to miss a second consecutive game with a sprained ankle.

DeMarcus Lawrence, who tied for second with 14½ sacks last season, stopped a three-game sackless streak against the Titans. Daniel Ross and Tyrone Crawford had a sack apiece, while Caraun Reid and rookie Dorance Armstrong shared one.hasn't done it much recently. 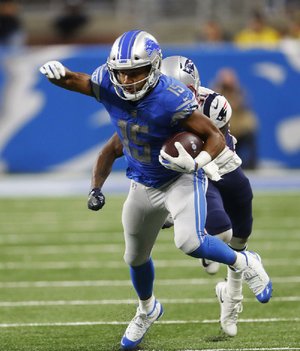 Photo by AP/PAUL SANCYA
Wide receiver Golden Tate, acquired by the Philadelphia Eagles from the Detroit Lions last week, said he has “read my social media” and is well aware of the intense rivalry between his new team and the Dallas Cowboys, whom the Eagles will host tonight.