Islamists call for her death in Pakistan by KATHY GANNON The Associated Press | November 9, 2018 at 2:55 a.m. 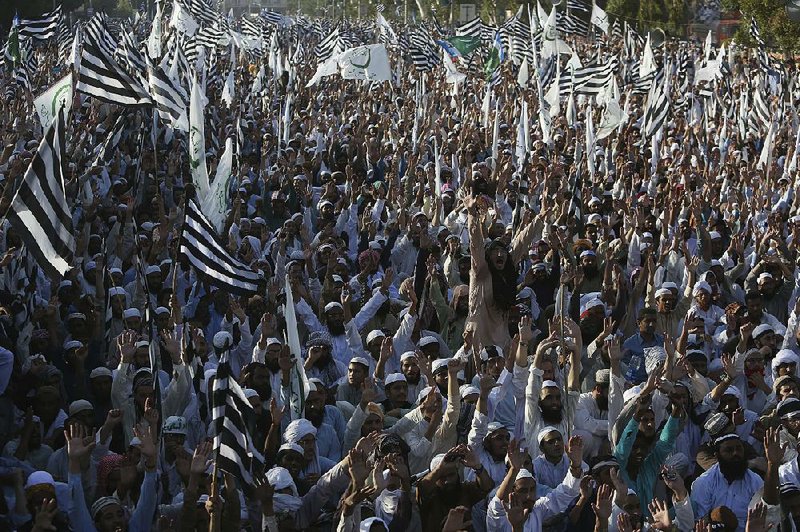 Supporters of religious parties rally Thursday in Karachi, Pakistan, to protest the release of Asia Bibi, a Christian woman who was acquitted of blasphemy. She and her family are under heavy security.

ISLAMABAD -- A week after Pakistan's Supreme Court acquitted her of blasphemy, a Christian woman who had been on death row for eight years was freed from detention Thursday, but her whereabouts are a closely guarded secret after demands by extremists that she be hanged in public.

The case of Asia Bibi has become a political minefield for Prime Minister Imran Khan. He is trying to placate the Muslim extremists who have threatened to topple his government, while keeping the 54-year-old mother of five safe from a lynch mob and also finding a way to allow her to leave Pakistan without drawing rioters into the streets.

Bibi has been offered asylum by the European Parliament, which championed her case after she was convicted in 2010 under Pakistan's harsh blasphemy law. There has been sharp worldwide criticism of the law, which remains popular in the Muslim majority country and carries the death penalty for insulting Islam but also has been used as a way to settle scores and pressure members of minority groups.

Bibi was with her family under heavy security after being transferred to the Pakistani capital overnight from her detention facility in southern Punjab, triggering expectations of an imminent departure from the country.

For the moment, Bibi remained in Pakistan, according to two people close to her who spoke on condition of anonymity so as not to endanger her. That was confirmed later Thursday by Information Minister Fawad Chaudhry.

After her Oct. 31 acquittal by Pakistan's Supreme Court, the hard-line Tehreek-e-Labbaik Party forced a nationwide shutdown as its supporters filled the streets for three days to protest the ruling. The rallies dispersed only after Khan's government promised that a court would review a motion to challenge the acquittal and deny Bibi permission to leave Pakistan.

Khan, who came to power after elections last summer in part on an Islamist agenda, was immediately accused by critics of giving in to the extremists.

Bibi's release, high-security transfer to Islamabad and her likely departure raised the possibility that Khan's promises to the Islamists could have been an effort to buy time. The government, however, has not openly declared that Bibi was free to leave.

Tehreek-e-Labbaik, in a video message that was circulated widely Thursday, said it received government assurances after Bibi's relocation to Islamabad that she wouldn't leave the country until the review petition was heard.

Khan, a former cricket star and playboy who embraced religious conservatism before he ran for prime minister, is hamstrung by contradictions within his own government, according to Zahid Hussain, who has written two books on the rise of militancy in Pakistan.

"There are some within the party, senior members of the party, who are pampering religious extremists for the sake of votes, and some believe in the same kind of worldview," Hussain said.

Bibi's ordeal began on a hot day in 2009 when she went to fetch water for herself and fellow farmworkers. An argument took place after two women refused to drink from the same container as Bibi, who is Roman Catholic.

The two women later said Bibi had insulted the Prophet Muhammad, and she was charged with blasphemy. She was put on trial, convicted and sentenced to death in 2010.

While her conviction was appealed, her case gained worldwide attention and focused international criticism on the blasphemy law. In announcing her acquittal last week, a three-judge panel of the Supreme Court upheld the law itself but said prosecutors had failed to prove Bibi had violated it.

European Parliament President Antonio Tajani invited Bibi and her family to Europe. In a letter, a copy of which was seen by The Associated Press, Tajani told Bibi's husband, Ashiq Masih, that the parliament is "extremely concerned for your safety as well as your family's, due to the violence by extremist elements in Pakistan."

The letter added to expectations that she and her family would leave for Europe, though their destination has not been confirmed. Spain and France have offered her asylum.

Speaking earlier this week in the Punjab capital, Lahore, Masih said he hasn't slept much since his wife's acquittal and the subsequent anger by extremists. His initial joy quickly turned to sadness when he realized the ordeal was not over.

He said that he is consumed by fear every time his phone rings and haunted by the shouts of "Hang her!"

"Sometimes I pace on the rooftop, sometimes I walk on the road outside our home," he said. "I look at the faces around me and I wonder if anyone is waiting to hurt us."

Information for this article was contributed by Munir Ahmed, Asim Tanvir, Mohammad Farooq and Ishtiaq Mahsud of The Associated Press.