This year's Tide can be the best of the rest 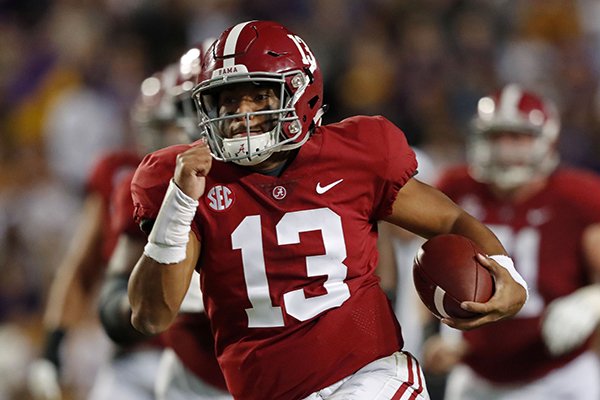 It is way too early to start the debate of is this Alabama team the best of all time, so let's get after it. At least get the ball rolling.

Last Saturday the No. 1 Crimson Tide rolled into Death Valley for a night game against No. 3 LSU. For visitors that's supposed to be like trick or treating in a New Orleans cemetery.

Instead, the Tide took all the candy and ate it. They scored in every quarter, and the Tigers never scored.

It was their ninth consecutive win this season, and their average margin of victory is by almost 40 points per game. LSU had the No. 7 defense in the country going into the game. When it awoke Sunday it was No. 40. The Tigers' offense was ranked 60th; today it is 103.

That's what the Crimson Tide do, destroy opponents. They make mortals out of superstars.

College football history books are full of great successes from Army in 1945 and through the ages with teams from Texas, Arkansas, LSU, Auburn, Georgia, Oklahoma, Nebraska, Miami, Notre Dame, Ohio State and others.

No, that is not a mistake to have Arkansas in that list. Most people who make lists of top 10 teams won't consider the 1964 Razorbacks, but that team was 11-0. The most points it gave up was 22. It shut out five opponents and three more were held to a touchdown or less.

Arkansas won the Football Writers Association of America National Championship because it was awarded after the bowl games.

There have been a lot of great football teams and most fans have a favorite, but with three games remaining, this Alabama team is making a case for itself as the best ever. That is something Nick Saban would absolutely blow a fuse over if asked about because he does have games left at Mississippi State, the No. 6 defensive team in the nation, The Citadel (he's the only one who believes the Tide have to take that game serious) and arch-enemy Auburn.

Then there's the SEC Championship Game and most likely the College Football Playoffs. Then and only then, when the Tide are sitting at 15-0, will Saban comment, and it will be something like, "that's for you guys to decide, not me."

Consider, though, that what happened in Baton Rouge last Saturday was not an anomaly. It was just another day of King of the Hill and no one, not even LSU who is probably the second best team in the SEC, could make a dent in the Tide armor.

The Tigers ran 25 times and gained 12 yards total. Total. For most of the game they had negative yards on the ground.

This was two very fast, very physical teams clashing and on the moment of impact there was rarely any doubt who the victor would be. LSU kicked off one time and punted nine times.

It only got into the red zone twice and came away with nothing both times.

The second best team in the league was shut out.

Not sure if Saban ever smiled, not even after the game. Most likely from the start of the game to the finish you couldn't pull a piano wire through his clenched lips.

Yet, he was in charge of every second, every detail and every outcome. His quarterback, Tua Tagovailoa, was playing with an apparent sprained knee, but against the vaunted Tiger defense he completed 25 of 42 passes for 295 yards and 2 touchdowns, and for good measure he ran 44 yards for another touchdown. On an injured leg he kept himself in front in the race for the Heisman.

There's lots of football to be played before the real debate can begin about what college football team is the GOAT, but look for this Alabama team to be 15-0 and at the heart of the argument.

Print Headline: This year's Tide can be the best of the rest