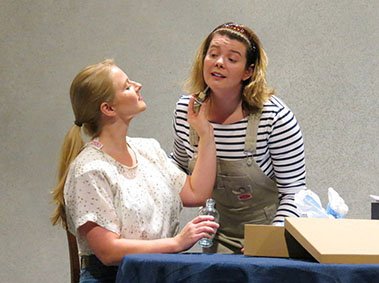 Courtesy photo "Miss Churchill sees the theater as an open frontier where lives can be burst apart and explored, rather than as a cage that flattens out experience and diminishes it," said critic Frank Rich of "Top Girls" in 1982. Mollie Armour and Halley Mayo, pictured from left, join Mischa Hutchings in the University Theatre production opening Nov. 9.

First produced in London in 1982, Caryl Churchill's "Top Girls" hit the stage with a main character, Marlene, meant to bring to mind Prime Minister Margaret Thatcher. She's an "iron lady," happy to leave certain facets of traditional femininity behind in order to achieve career success. Although it's been 30-plus years since Churchill's play debuted, it hasn't lost a bit of its relevancy, say those involved with the production opening at University Theatre in Fayetteville this week.

"Like the current United States government, Margaret Thatcher advocated for deregulation, tax breaks and privatization of state-owned industry," says the production's dramaturg, Lauren Ferebee. "She championed the individual over the collective, a debate Marlene and Joyce articulate in the play. As Churchill imagined, Thatcher's policies had deep effects on the working class, particularly working mothers. At the heart of 'Top Girls' is a question that resonates through time: Are women able to determine their own lives and careers, or do the social structures that surround them limit their choices?"

"'Top Girls' is a devastating and darkly funny play about the high cost of success in 1980s England and how women took on Margaret Thatcher's 'iron lady' approach to empowerment at the sacrifice of their own humanity, their loved ones and compassion for human frailty," says director Shana Gold. "It continues to be relevant today as women continue to struggle and make sacrifices to have satisfying home and work lives while facing sometimes insurmountable challenges, and as other women feel it's necessary to take on typically 'male' qualities or oppress other women to get ahead."

Graduate student Mischa Hutchings says that, once cast as an actor in the show, she discovered levels to the script she had previously overlooked.

"At first, I thought the play was engaging [but the] societal dialogue was antiquated -- as in, 'We have already heard this,'" she notes. "But the more I delve into the script with Shana and Lauren, the more I understand that this play is still a conversation that is living today. The final scene of the show will particularly resonate with audiences today: What happens when individualism goes too far? What do we owe each other as a community, if anything?"

The play opens with Marlene throwing a party for herself to celebrate her recent promotion at the employment agency where she works. In a quirky plot twist -- the kind the unconventional Churchill is known for -- her guests are all historical figures, long dead, and include both fictional and real characters like Pope Joan and Chaucer's Patient Griselda. Diverse in personalities and from wildly varying time periods, the one thing they all have in common is a measure of sacrifice they all suffered simply for being born female.

"The play itself is divided into three parts -- the structure, in some ways, reflects the different ways in which Marlene herself is divided -- she is isolated in her life and is reaching for some sort of community," says Gold. "She has no real friendships of her own, so she invites distinctive women from history, all of whom made great sacrifices as mothers and humans, to find some sense of volition and control in their lives."

The show, fittingly, is performed by an all-female cast.

"I love that a group of female actors gets to be center stage without a romantic storyline, another rarity on American stages."

Print Headline: At What Price?