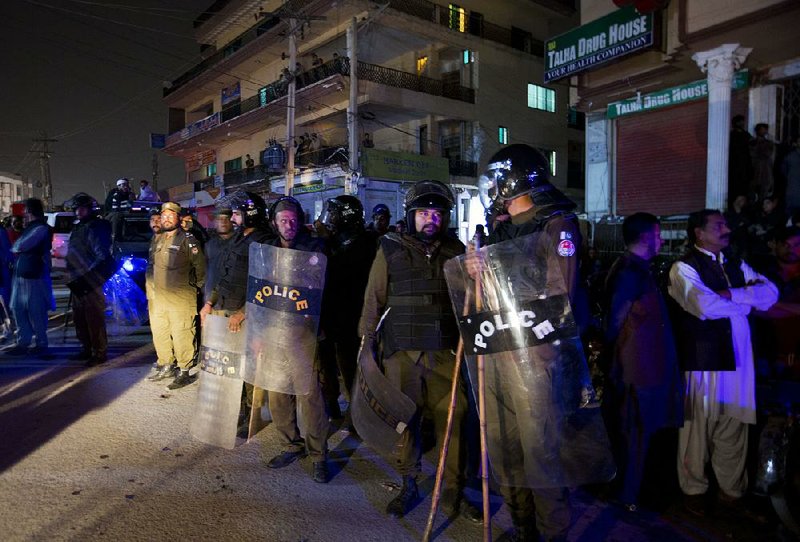 Pakistani police stand guard outside a hospital where supporters gather Friday to receive the body of Pakistani cleric Maulana Samiul Haq, who was killed in a knife attack at his home, in Rawalpindi.

ISLAMABAD, Pakistan -- A Pakistani cleric known as the "father of the Taliban" was stabbed and shot to death Friday in his home outside Islamabad, his family and aides said.

The killing of Maulana Samiul Haq, 82, by unknown assailants came during a spate of violent nationwide protests by Muslim groups angered at a ruling by Pakistan's Supreme Court on Wednesday that acquitted a Christian woman on charges of blasphemy. Maulana is a title of respect for a religious scholar in Islam.

It was not immediately clear whether the slaying was related to the unrest. But aides to Haq said he had attempted to join the protests after weekly prayer services. He had returned home because roads were blocked.

Angry protesters were seen on videos posted on social media smashing and burning cars on the highway between Islamabad and Rawalpindi.

Haq, a former senator, was the longtime leader of a conservative Sunni Muslim party that preached opposition to the West. For several decades, he ran a seminary in Peshawar near the Afghan border that trained hundreds of young men to join the Taliban forces in Afghanistan in the 1990s.

As news spread of the attack, Pakistani officials and religious leaders expressed shock and sorrow at his death.

"I have great respect for Maulana Sami, and his death is a huge loss to Pakistan," said Maulana Fazl-Ur Rehman, a leading Sunni religious politician who heads another conservative Sunni party.

Pakistan's interior minister, Shehyar Afridi, condemned the slaying in a statement and said he "shared the pain" of his family. He said Haq's religious and political service to the country would be long remembered.

The news also brought a fresh outbreak of demonstrations on the darkened streets of Islamabad, where protests against the acquittal of Asia Bibi by the high court broke out Friday, as well as in other cities, for the third day in a row. At 8 p.m., officials of the federal capital asked residents in an online post to stay home after the assassination.

Since the Supreme Court ruling in the blasphemy case, thousands of protesters have blocked highways, burning tires and vehicles. They view the acquittal of Bibi as an insult to Islam and the Prophet Muhammad.

Some of the demonstrators and their leaders have demanded that Bibi be put to death. The peasant woman in her early 50s was charged with blasphemy after arguing with some Muslim workers in a field in 2009. She was convicted and sentenced to death. The high court overturned those rulings, prompting some protesters to demand that the justices be killed and that the army rise up in mutiny.

Prime Minister Imran Khan, who is now on a visit to Beijing, addressed the nation Wednesday night and appealed to the protesters not to challenge state authority. He emphasized that he and all Pakistani Muslims revere Muhammad and said the protesters' actions were "deplorable."

On Thursday, a government negotiating committee met until late at night with the leaders of the anti-blasphemy movement that spearheaded the protests. The religious group demanded that Bibi be barred from leaving the country, but Information Minister Fawad Chaudhry initially rejected the demand, saying the government will not accept any dictates.

The government ultimately agreed that Bibi will not be allowed to leave the country until the Supreme Court makes a final review of its verdict, said provincial minister Noorul Haq Qadri, according to the agreement.

It comes a day after Ghulam Mustafa, the lawyer representing a provincial cleric in Punjab who had filed the initial blasphemy charges against Bibi, petitioned the Supreme Court requesting the judges review her acquittal. The court has not set a date to take up the petition.

Pakistan's Supreme Court has not been known to reverse its decisions but court reviews typically take years. Bibi's ordeal will continue until the review is completed.

The latest development will likely irk rights groups calling for the release of Bibi, who has spent nine years in jail since her arrest in 2009. Bibi's family has always maintained her innocence and says she never insulted Islam's prophet.

Information for this article was contributed by Pamela Constable, Haq Nawaz Khan and Shaiq Hussain of The Washington Post; and by Munir Ahmed, Asim Tanveer, Zaheer Babar and Riaz Khan of The Associated Press.