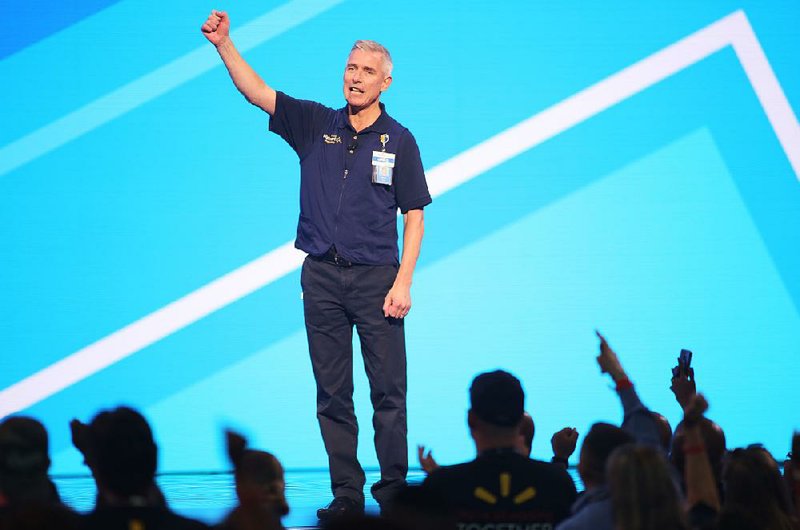 Greg Foran, president and chief executive officer of Walmart U.S., leads a cheer Wednesday during a meeting of Walmart associates at Bud Walton Arena in Fayetteville. “Investing in the personal and professional success of our associates is vital to Walmart’s future success,” he said. - Photo by David Gottschalk

BENTONVILLE -- Walmart Inc. is offering a new benefit for its U.S. employees, giving them the opportunity to earn college degrees from three universities in hopes the perk will help the retailer attract and retain workers.

The Bentonville company said Wednesday that the new program will subsidize the cost of tuition, books and other fees for interested employees who will pay $1 a day. The program, which also includes academic counseling, was revealed as part of Walmart's shareholder week events. The company said the program is part of its commitment to train and educate its workforce.

The program puts Walmart in a partnership with Guild Education -- a startup company that helps large employers manage education benefits -- to offer an associate degree in business and a bachelor's degree in supply-chain management. Full-time, part-time and salaried employees of Walmart U.S. and Sam's Club are eligible.

"The education industry is ripe for some form of disruption," Drew Holler, Walmart's vice president of associate experience, said during a panel discussion. "We think we have an opportunity to help our associates with this."

The classroom offerings are designed for adult workers and include online classes that allow students to progress at their own pace. The courses will be offered by the University of Florida, Brandman University in Irvine, Calif., and Bellevue University in Nebraska, all nonprofit schools with high graduation rates, according to Walmart. Courses can be taken on campus or online.

Walmart said it vetted more than 300 universities to find schools that were focused on helping adult students and had a dedication to graduation rates.

Kathleen McLaughlin, Walmart's chief sustainability officer, said the University of Arkansas, Fayetteville was not among the schools selected because it is not part of the Guild Education network. There will be opportunities to add schools and degrees as the program evolves, she said.

The benefit, which requires a participant to have a high school diploma or a General Educational Development diploma, is part of Walmart's efforts to compete for employees in a tight labor market.

The company has taken other steps to reduce turnover, including boosting starting wages to $11 an hour earlier this year. Walmart also has improved its maternity and paternal leave policies, while also adding a benefit for workers who want to adopt children.

Walmart already offers a subsidized program for workers who are looking to complete their high school education. But Danette Howard, who is senior vice president and chief strategy officer of Lumina Foundation, applauded Walmart for turning its attention to college degree opportunities for workers.

The Lumina Foundation -- an Indianapolis private foundation that aims to make higher education accessible to all -- will monitor Walmart's progress. Howard said the foundation has worked with several other companies on similar initiatives, but said none has been on the scale of Walmart's program.

It also will be the first time the Lumina Foundation has started with a company from a program's inception.

"I think it's going to be a game changer," Howard said. "It shows [Walmart is] stepping up as a leader in the field."

But the new perk did face skepticism from at least one employee advocacy group Wednesday.

Randy Parraz, who is the director of Making Change at Walmart, said the retailer generally makes announcements during its shareholders meeting to appease the general public and its workers. He said it remains unclear as to which workers, if any, will benefit, pointing to previous announcements such as the $11 wage that coincided with the closing of 63 Sam's Club stores in January.

"At best, if this is more than a publicity stunt, then Walmart is merely playing catch-up to other multibillion dollar companies when it comes to providing benefits to its workers," Parraz said.

Other companies like Starbucks, Amazon.com and Best Buy have established college tuition programs. Starbucks' program through Arizona State University began in 2014. Walmart -- the nation's largest private employer with about 1.5 million U.S. workers -- cited data from the World Economic Forum to highlight the need for higher-education benefits as jobs rapidly evolve because of technology and innovation.

Walmart said a third of all workers may need to develop new skills in different types of roles by 2030. In addition, 75 percent of college students juggle work, parenting or both. Almost half of all students are on their own financially, the company said.

Walmart did not say how much its program is expected to cost, but officials estimate about 68,000 employees could enroll within the first five years.

"Investing in the personal and professional success of our associates is vital to Walmart's future success," Greg Foran, Walmart U.S. chief executive officer, said in a statement.

The college tuition program will provide workers with support from a Guild Education coach, which will be available to help with the application and enrollment process.

Employees enrolled in the program will not be penalized if they leave the retailer before the completion of their degree and will not be obligated to remain with the company after they finish the program.

Walmart said the goal won't be focused on the number of employees enrolled. The company intends to measure itself on the completion rate.

"We want to focus on how do we provide the best possible experience and get people across the finish line," Holler said. 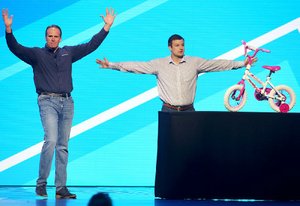 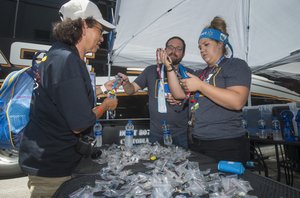 Photo by Ben Goff
Karen Galvan-Green (from left) of Grand Junction, Colo., trades pins Wednesday with fellow Walmart employees Nick Graves of Rogers and Taylor Coberly of Pea Ridge at the Walmart Museum on the Bentonville square. Tour buses have been bringing groups of employees from around the world to tour the museum during the retailer’s shareholders week. 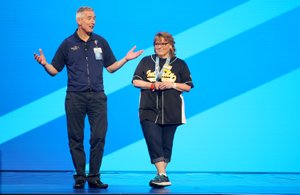 Walmart all business at Rogers event