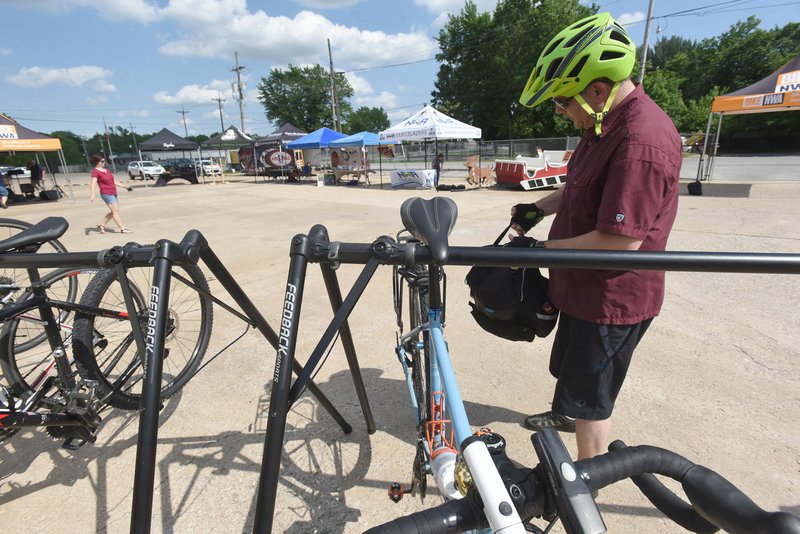 Eric Liberatore of Bella Vista parks his bike at the Ride Your Bike To Work Day party Friday at BikeNWA in Bentonville. Liberatore biked to his job on Friday.

Ben Craig may add one or two minutes to his daily commute when he pedals his bike rather than drive his car, but he enjoys the freedom riding a bike brings.

He makes the 12-minute, three-mile trip from home to his office on Southwest A Street in Bentonville at least three times a week.

The U.S. cities with the most bike commuters are:

Source: The League of American Bicyclists

May is National Bike Month, sponsored by the League of American Bicyclists. It was established in 1956 to showcase the benefits of bicycling.

BikeNWA held a bike-to-home-from-work party at its offices in Bentonville Friday evening in addition to having aid stations along the Razorback Greenway in the region’s four largest cities Friday morning.

Craig is one of a growing number of workers across the country who commutes on a bicycle. Only 0.6 percent of workers age 16 and older in the United States commuted by bike in 2015, according to the Department of Transportation's latest numbers.

Numbers and trends for bike commuting in Northwest Arkansas aren't available, but a Walton Family Foundation study found the average annual bike usage on area trails has increased by 24 percent over the last two years to 83,700 cyclists.

The study doesn't say how much of that usage was for recreation or transportation, but "it's a good baseline from which to work and start converting people, hopefully, to bike commuters," said Sam Slaton, managing director of BikeNWA, a nonprofit bike advocacy group that supports the work of other local biking organizations.

The Razorback Greenway has made traveling between the region's four largest cities by bike more efficient and safe. The 37-mile trail was completed in May 2015.

There were another 34 miles of multi-use trails built from 2015 to 2017 throughout the region, according to the foundation.

About 27 percent of Northwest Arkansas residents rode bikes six or more days in the past year -- 11 percentage points higher than the national average -- and it contributed about $86 million in annual health benefits last year, according to the Walton Family Foundation study.

Aaron Loehndorf began commuting by bike when he lived in Washington state for economic reasons.

"I wasn't making enough to actually own a car," he said.

Loehndorf continued to bike commute after moving to Springdale four years ago. He lives about a mile from the Shiloh Museum of Ozark History where he is the collections and education specialist. Now, his ride to work is more convenient than driving a car.

"In the winter time, by the time my car got warmed up, I could already be at work," he said. "I bike to work every day it's not raining."

The convenience is lost when it rains and he has to pack a set of dry clothes and protect his bag, he said.

Loehndorf was one of several bikers who stopped by an aid station BikeNWA set up in front of Phat Tire on the Razorback Greenway in Springdale to celebrate National Ride Your Bike to Work Day on Friday. BikeNWA had a station along the Greenway in each of the region's four largest cities for two hours in the morning to serve refreshments and hand out T-shirts to those commuting by bike to work.

A reason that often tops the list of why people commute on a bike is that it's a more enjoyable experience than riding in a car.

"I don't know anyone who enjoys being stuck in their car in traffic," Slaton said. "It opens up opportunities for experiences and relationships," he said of biking.

Craig, who works for Green Circle Projects in Bentonville, calls it freedom. There's more freedom to choose which route to take, to have a clear mind, to notice surroundings more.

"It just makes you feel like a kid again," he said.

It's also more convenient to jump on a bike to a project site or a meeting in another part of downtown than it is to drive a car and find parking, he said.

"I can jump on a bike and actually be there quicker," he said.

Craig's commute is a combination of trails and streets. There's been a few times when cars have gotten too close for comfort.

"Unfortunately, that's part of the risk associated with it," he said. "You kind of have to ride defensively and be very mindful and always go with the mindset that people are not going to see you."

The lack of protected bike lanes on streets is a reason more people don't commute on bikes, officials said.

"A lot of people just don't feel comfortable riding on the roadways with motor vehicles," Slaton said, adding it's something city leaders are beginning to recognize.

There are only 200 miles of protected bike lanes in the United States and more than four million miles of road, according to The League of American Bicyclists, a national cyclist advocacy organization.

Protected bike lanes have some kind of physical separation between the vehicle road and bike lane so lane users of all ages and abilities feel safe using it, according to bike and transportation officials.

The largest obstacle is having the resources to do that, he said. Streets are prioritized because motorized vehicles are the main form of transportation, leaving little to nothing for bike infrastructure despite the increasing demand for it.

One step forward could be for cities to try dedicated bike lanes in certain areas to see if they'd be used, Becknell said, adding he could envision Rogers doing that in a few years. The more those trial areas are used, the more likely municipalities would be to invest resources to expand them, he said.

BikeNWA is also working to create city-specific advocacy committees to educate riders and community members about what's possible regarding bike infrastructure and equip them to encourage city leaders to implement some of those options, Slaton said.

Increasing bike commuters would help with traffic congestion, a common complaint among the region's residents, as noted in community workshops.

"Every person you can put on a bike is one less person in front of you if you're in a car," Becknell said, adding that it's also less expensive to build biking infrastructure than it is roads for vehicles.

Forty-three percent of all vehicular trips in the U.S. are less than three miles, according to Federal Highway Administration's 2009 National Household Travel Survey.

Three miles is "a lovely distance to ride a bike," Slaton said.

The time it takes to ride a bike depends on the type of bike and how fast the rider pedals. Slaton said he "goes nowhere fast" and it takes him about six minutes to ride a mile. Five miles, or about 30 minutes, is a comfortable distance to ride for a commute, he said.