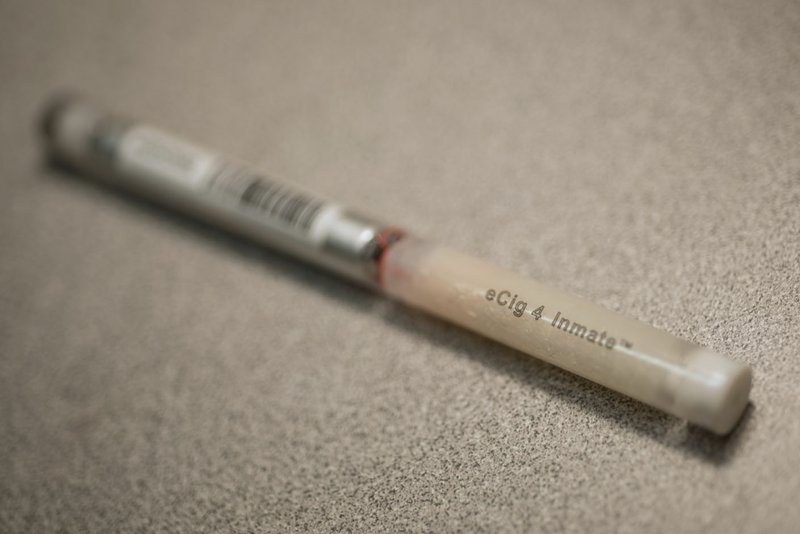 An e-cigarette is pictured similar to the type that will be supplied to inmates.

BENTONVILLE -- Inmates hoping to vape at the county jail will have to wait for an answer.

Justices of the peace at their Committee of the Whole meeting heard a proposal Tuesday from Meyer Gilbert, chief deputy for the Benton County Sheriff's Office, to sell e-cigarettes from the jail's commissary.

The jail is a smoke-free facility, but County Judge Barry Moehring said he will work with the Sheriff's Office in changing any ordinances so the jail can add e-cigarettes to the list of items sold in the commissary.

Gilbert said it can cause additional stress when someone is arrested and they have to quit smoking "cold turkey," which in turn can cause difficulties for jail deputies.

He added e-cigarettes would also serve as a deterrent because the privilege can be taken away from inmates with disciplinary problems.

Jails across the country have started selling e-cigarettes as a revenue source and also to help cope with inmates deprived of nicotine, according to a June 2014 article in the New York Times.

Casey Roebuck, a spokesperson for the Tulsa County Sheriff's Office, said the commissary started selling e-cigarettes to inmates last fall. The money generated from commissary sales, including e-cigarettes, has been helpful in funding jail operations, he said.

Roebuck said the e-cigarettes cost $9.32 each for nonflavored and $9.44 for menthol and mixed berry flavors. Roebuck said e-cigarettes are among the most popular items offered in the commissary.

Capt. Jeremy Guyll of the Benton County Jail estimates more than 90 percent of its inmates smoke. Guyll said he asked 18 inmates in one pod and learned they all smoked, and each person said he would purchase e-cigarettes.

An electronic cigarette is a nonflammable electronic smoking device that uses state of the art micro-electronic technology which provides the smoker with a “smoking” sensation without all the risks of chemicals inhaled into the body.

The Sheriff's Office planned to use $2,500 to purchase electronic cigarettes specifically made for jails and prisons. Gilbert described it as a pilot project with a small monetary investment, which the Sheriff's Office could halt if it's not working.

Gilbert said officials have not determined the price inmates would pay for e-cigarettes. The money raised would go toward replacing the $2,500 initial investment and then be dedicated to replace radios for the Sheriff's Office.

Glenn Latham, who faces Sheriff Shawn Holloway in the May 22 Republican primary, spoke against the Sheriff's Office selling e-cigarettes to inmates, saying it would be a security risk.

"Vapes would make it very complicated in a smoke-free detention center," Latham said. "The batteries have been known to catch fire or explode. Prisoners will find a way to extract the batteries and make either weapons or tattoo guns."

Latham said jail deputies' jobs are hard enough without having to distinguish between cigarette smoke or vapor.

"Are we seriously saying we are concerned about their withdrawal symptoms or just trying to turn the detention center into a revenue generator," Latham said.

Gilbert said the e-cigarettes can't be converted into a weapon. The battery is wrapped around foil-like paper and dissolves into powder when opened to the air.

"There's no danger from them," he said. "The little thumb size pencils we give the inmates are more dangerous."

Guyll said, each e-cigarette will be labeled and scanned, and when an inmate buys a new one, he must return his old one in order to get another.