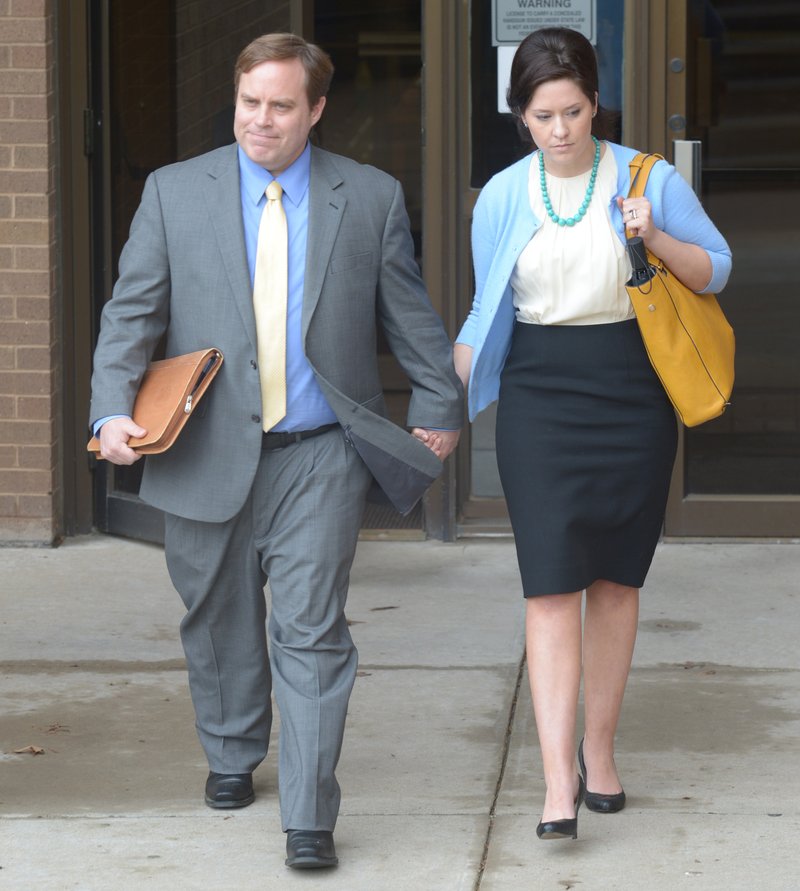 Co-defendant Randell Shelton Jr. of Kemp, Texas was also found guilty of 12 of the 15 charges against him. The two men are best friends who each served as best man at the other’s wedding, according to testimony and attorneys’ statements.

“Today is a bittersweet day for the people of Arkansas,” U.S. Attorney Duane “Dak” Kees of the western district of Arkansas said after the trial. “We should always rejoice when our justice systems works, but it is nonetheless painful when that justice system has to be directed at those individuals we have placed our trust and confidence in.”

Neither Woods nor Shelton commented after the trial, each leaving accompanied by his wife and other family members. Neither defendant showed emotion as the verdicts were given or as the jury was polled at Shelton’s attorneys’ request, each juror reaffirming his or her verdict on each count.

The legal fight is not over, attorneys for both defendants said.

“Right now, I can’t count that high,” said Shelly Koehler of Fayetteville, defense attorney for Shelton, when asked what issues might be up for appeal in the case.

Defense attorneys were in a hearing objecting to instructions given by U.S. District Judge Timothy L. Brooks to the jury and had just been denied a mistrial request on the issue when the jury announced it had reached a verdict shortly before 3 p.m.

Woods and Shelton were charged in a kickback scheme involving Ecclesia College in Springdale. Woods was also charged in a similar scheme for AmeriWorks, a Bentonville nonprofit company. One of the expected issues for appeal is Shelton’s repeated requests for a separate trial, Koehler said.

The seven-woman, five-man jury rendered its decision in a trial that began April 9.

Both Benca and Koehler ranked the admitted misconduct of FBI Special Agent Robert Cessario as a top appeal issue. Cessario, former lead investigator in the case, wiped the hard drive of a laptop used to gather evidence. His actions were referred to the Office of the Inspector General of the FBI for investigation, but the pre-trial defense request for dismissal of the case because of that misconduct was denied.

More than 300 motions, replies and orders filled the case file and the trial had more than 400 exhibits, according to court records. The case has been among the most disputed he has ever tried, Brooks has said in a pre-trial court order March 2.

Woods and Shelton face up to 20 years in prison on each of the fraud and conspiracy charges. Woods faces an additional 10 years on the money laundering charge. They must also forfeit any money or property obtained through their actions in the charges they were convicted on.

A report on recommended sentencing normally takes up to four months to compile, “but this is not a normal case,” Brooks said from the bench after the ruling. A vast amount of information has been collected already in this case, he said. The conduct of the two men during their period on bail before trial has been exemplary, he said. So the pre-sentencing could be ready in less time, he said.

Both defendants were released on the same bond they had met before the trial while awaiting sentencing, but with their travel further restricted. Woods was allowed to travel throughout the western district of Arkansas before, but now must get permission to travel outside Benton, Washington and Madison counties. Shelton had similar restrictions placed on his movements in Texas.

Woods cooperated with federal investigators from November 2015 through early 2016.

Paris pleaded guilty April 4 to one count of conspiracy. He resigned as Ecclesia’s president and from the private, Christian college’s board before his guilty plea. His sentence is pending.

Paris disguised the kickbacks as consulting fees paid to Shelton’s business, Paradigm Strategic Consulting, according to the indictment. Shelton then passed the money along to Woods and former state Rep. Micah Neal of Springdale, the government contends.

Neal pleaded guilty Jan. 4, 2017, for his role in the scheme and was the government’s first witness in the case. His sentence is also pending.

The kickback allegations involve $550,000 of the more than $717,500 in General Improvement Fund grants Ecclesia received from 2013 through 2014, the U.S. Department of Justice contends. Woods directed the most grant money Ecclesia received at more than $350,000, court records show.

Legislators controlled a portion of the state General Improvement Fund before a recent state Supreme Court ruled the process unconsitutional Oct. 5. The fund consists of state tax money left unallocated at the end of each fiscal year and interest earned on state deposits. Each legislator was given a share of the fund to be directed to a nonprofit group or government entity.

Woods directed a $200,000 grant to Ecclesia in September 2013, grant records show. Neal supported a $50,000 grant to the college and Woods another $150,000 in December 2014, also according to grant records. The amount of money Woods is accused of receiving as a kickback isn’t specified in the indictment. It claims much of that money was paid in cash, except for a $40,000 wire transfer from Shelton.

AmeriWorks is a corporation formed by Milton R. “Rusty” Cranford, a lobbyist who is charged in Missouri with one count of conspiracy and eight counts of accepting bribes in an unrelated indictment.

Cranford described AmeriWorks in a grant application as a work-training program. Cranford, 56, is set for trial June 11 in federal court in Springfield.

Woods’ indictment was the first in what Department of Justice officials and Brooks have said is a wide-ranging investigation into public corruption in Arkansas and other states. Since Jan. 4, 2017, four current or former legislators have pleaded guilty to corruption involving state General Improvement Fund grants.

Freedom of Information Act requests by the Northwest Arkansas Democrat-Gazette in January 2017 found at least three of the state’s eight economic development districts, which administered the grants, had been subpoenaed by federal investigators. Another development district would not confirm nor deny whether it had.

Since then, staff for the state Legislature obtained permission to hire outside legal counsel to represent them in dealing with federal investigators who have requested more records relating to the improvement fund grants. The records include state legislators’ working papers.

In addition to Wilkins and Neal, other current or former lawmakers who have pleaded guilty to corruption related to General Improvement Fund grants include former state Rep. Eddie Cooper of Melbourne and former state Sen. Jake Files of Fort Smith.