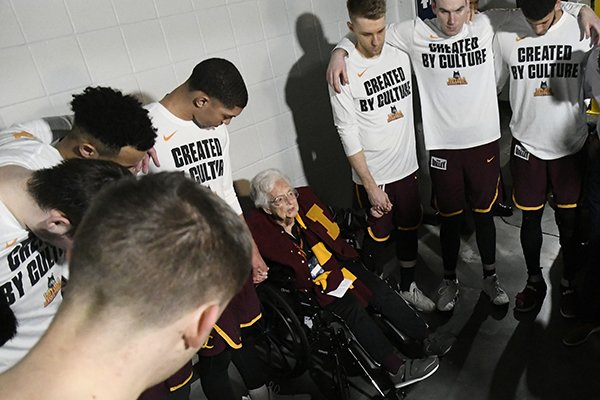 Apparently, the NCAA thinks there should be at least four places different in its tournament's seeding for there to be an upset, so the University of Arkansas, Fayetteville's loss to Butler was not officially an upset.

The biggest upset, of course, was No. 16 UMBC taking down overall No. 1 Virginia. All total, there have been 13 upsets, including three in the West Regional, two in the Midwest and one in the East.

That leaves an amazing seven upsets in the South Regional, out of 15 total games, and three of those were by No. 11 seed Loyola-Chicago. The Ramblers have hijacked the 2018 NCAA Tournament.

Former University of Arkansas at Little Rock coach Porter Moser, who has become an overnight sensation after 14 years as a head coach, is a household name. He coaches every bounce and every defensive move, then oozes charm and dignity for the cameras.

The Ramblers star player, at least on the court, has been Ben Richardson, whose father Dave apparently graduated from the University of Arkansas, Fayetteville in 1983.

The star player off the court is the beguiling 98-year-old chaplain, Sister Jean.

Her pregame prayers are laced with scouting reports, and she always has a smile for the cameras. Moser ordered her a pair of team shoes. On the back of the left one is Sister, and Jean is on the back of the right one.

She is in such media demand that Sister Jean Dolores Schmidt, from the order of the Sisters of Charity of the Blessed Virgin Mary, will have her own news conference Friday at the Final Four.

The NCAA has set aside 20 minutes in a breakout room. It will be her only availability.

The room most likely won't be large enough.

What would get really interesting is if the Ramblers' defense, discipline and unselfishness are enough to get them into the championship game to face Villanova. That would match two Catholic schools, and both have chaplains who pray before the game.

According to the New York Times, Father Rob Hagan doesn't offer game guidance, only spiritual and life counseling to the Wildcats. He's performed the weddings of several players and baptized their children.

Compared to Sister Jean, Father Rob is a kid. He's 53 and was an attorney before leaving that career to become an ordained Augustinian in 2003. He became team chaplain a year later.

When asked about Sister Jean, he sounded like a brother of the cloth: "It's brought a lot of awareness and enthusiasm to Loyola and to the order of the B.V.M. sisters, the work they do, the mission, the people they serve. I couldn't be happier for her and her order. It's really great to see."

Sister Jean and Father Rob could set a new standard in college basketball. With the success both teams are having every school may want to have an official minister of some sort. Prayer has never hurt anyone.

Of course Villanova, a No. 1 seed, only had to avoid upsets to get to the Final Four.

For seeding purposes, Loyola had three upsets as a No. 11 seed. The Ramblers beat No. 6 Miami, No. 3 Tennessee and No. 7 Nevada. The Ramblers also beat No. 9 Kansas State, but the NCAA didn't consider that an upset.

They won the three upsets by a total of four points.

Vegas has Loyola as the longest shot in the field, and Villanova is the favorite. Before Sister Jean and Father Rob can square off in prayer, Loyola must find a way to beat a talented No. 3 seed Michigan and the Wildcats have to deal with Kansas.

By NCAA standards, a Loyola win would be an upset, but maybe not.