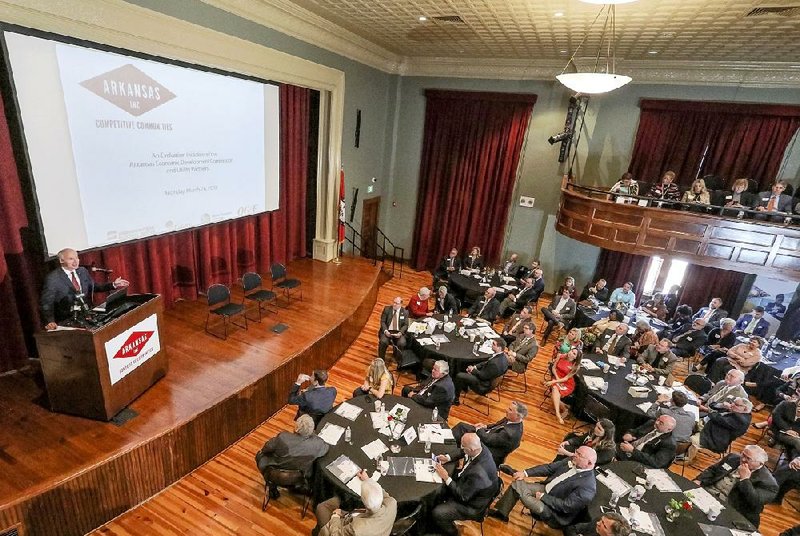 Gov. Asa Hutchinson on Monday announced the Competitive Communities Initiative, to ensure communities are prepared to compete for jobs and investments, at the Mosaic Templars Cultural Center’s auditorium in Little Rock. Earlier Monday, Hutchinson announced a reduction in the amount businesses are required to pay for workers’ compensation insurance. - Photo by John Sykes Jr.

It's at least the third such cost decrease in as many years, according to records with the state Insurance Department, and the largest cost reduction in more than 20 years, Hutchinson said.

"The objective is to make sure workers have the coverage they need and have a safe workplace and the employer has an environment where the workers are covered but, at the same time, the cost [of insurance] doesn't explode," Hutchinson said.

The state had 106 workplace fatalities in 1995 and 49 in 2017, Hutchinson told about 80 people at a noontime gathering at the Little Rock Regional Chamber of Commerce. Workplace injuries also have declined, Hutchinson said, although he didn't present those numbers.

"We have more people working today than ever before, so our workplace is becoming safer," Hutchinson said in the first of two appearances related to economic development.

About an hour later and a mile away at the Mosaic Templars Cultural Center in downtown Little Rock, Hutchinson told about 200 mayors, county judges, state legislators and others involved in economic development that all communities in the state have to do better at attracting jobs.

Hutchinson unveiled the Arkansas Economic Development Commission's Competitive Communities Initiative to encourage communities to be better prepared to better meet needs of possible investors, such as having a trained workforce and sites that are "turn-key" ready.

Hutchinson told reporters later that the state missed out on a Toyota-Mazda manufacturing plant last year because the prospective site in Crittenden County wasn't ready.

"I knew they were very interested in coming to Arkansas," he said. "When you're working on agreements to acquire land and trying to tell somebody, 'we're ready,' we're not there yet. So we lost that because they had a very short time frame and another state had a site that was already prepared, ready to go."

Toyota-Mazda announced in January it would put the plant in Huntsville, Ala.

The workers' compensation insurance rate cut, Hutchinson said, was recommended by the National Council of Compensation Insurance, a private group that works with insurance companies on rates, and approved Monday by state Insurance Commissioner Alan Kerr.

Alan Hughes, president of the Arkansas AFL-CIO, said Monday afternoon that he can't fault businesses for getting the reduction but said the cuts were being borne by workers who have seen their workers' compensation benefits reduced by legislators almost every two years since the mid-1990s.

"I understand the state wanting to make itself attractive to companies, but this is more on the backs of workers than on businesses," Hughes said.

Hughes also noted that Hutchinson has met several times with the union over various concerns, with another meeting scheduled in May.

The Insurance Department also said companies may experience increases or decreases in excess of the industry average. The new rates reflect only industry averages and will have varying impacts on workers' compensation rates when individual risk factors are applied for each business.

Dale Douthit, chairman of the state Workers' Compensation Commission, credited employees in his agency's health and safety division and its work with businesses.

"They work every day with businesses, labor and insurance companies," Douthit said. "After an accident, they'll go into that place of business and work with labor and management to develop practices, and hopefully that accident won't happen again."

Douthit also said the division's employees work closely with businesses that participate in a voluntary drug-free workplace program and can receive up to a 5 percent cut in workers' compensation rates for that participation.

"The workers' compensation world is a constant give-and-take," he said. "There's always a tug and a pull between labor and business. The governor has created a win-win for everyone. There's more people working. It's a safer workplace and businesses save a considerable amount of money."

Rajesh Chokani, chief executive officer of Welspun Tubular Inc., a pipemaker with more than 1,000 employees at its operations at the Port of Little Rock, joined the governor at the announcement. He said savings in workers' compensation insurance result in a bigger investment by the company in the state.