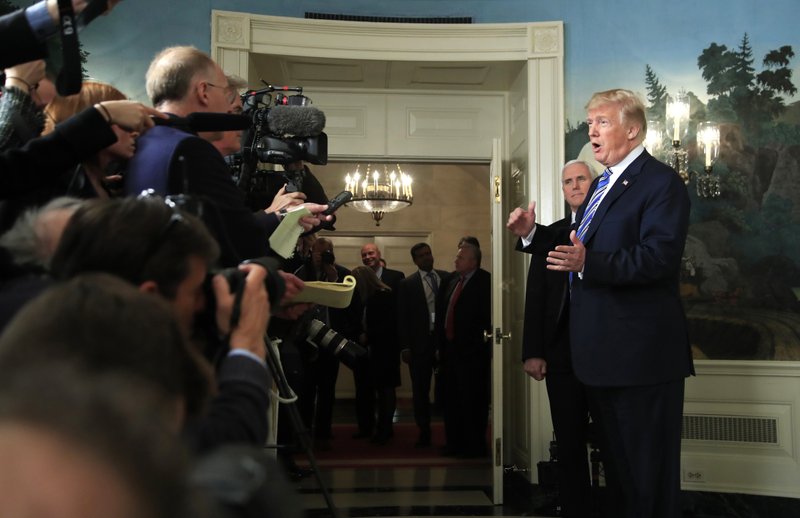 President Donald Trump with, Vice President Mike Pence, responds to reporters' questions in the Diplomatic Room of the White House in Washington, Friday, March 23, 2018, after he spoke about the $1.3 trillion spending bill he signed earlier in the day. (AP Photo/Manuel Balce Ceneta)

WASHINGTON -- Tucked in the congressional budget bill signed into law Friday is a provision that props up the price Medicare pays for a handful of medications, costing taxpayers millions of dollars at a time when President Donald Trump's administration is vowing to reduce the cost of prescription drugs.

Lawmakers acted after a lobbying campaign by a small Washington state pharmaceutical company called Omeros. Its main product is a drug called Omidria, used by hospitals in cataract surgery, which recently lost a coveted Medicare reimbursement status. Individuals associated with the company also stepped up their political contributions.

Rep. Cathy McMorris Rodgers of Washington, the fourth-ranking House Republican, took the issue to Speaker Paul Ryan, R-Wis., securing a place for the drug provision in the 2,232-page spending bill, aides said. The provision restores the drug's expired reimbursement status for two years, making it more lucrative for hospitals to continue using it.

The targeted provision succeeded even as broader health care measures failed to make the cut in the budget bill, from legislation to stabilize insurance premiums under the Patient Protection and Affordable Care Act for millions of consumers to a drug-industry backed effort to roll back recent changes that shift some Medicare costs to pharmaceutical companies.

The nonpartisan Congressional Budget Office estimates the pricing break for the Omeros drug and three products from other companies will cost taxpayers $26 million over 10 years, taking into account long-range effects.

Ryan and McMorris Rodgers said they acted to preserve patients' access to an innovative drug.

"This provision is the correct policy, was approved by both Republicans and Democrats involved in writing the bill, and was included at the request of members of our conference," said Ryan spokesman AshLee Strong. "To suggest any other reason is not only false but absurd and insulting."

Nate Hodson, a spokesman for McMorris Rodgers, said she pushed the measure "to provide patients across the country access to safe, innovative, life-changing drugs." Omidria is injected in the eye to prevent excessive shrinking of the pupil during cataract surgery and reduce pain afterward. Cataract surgery is usually an outpatient procedure.

Drugmaker Omeros had no initial response.

Some saw a disconnect in lawmakers' actions.

"At a time when policymakers are saying that they are interested in reducing drug costs this is a policy that runs counter to those talking points," said analyst Andrea Harris of the investment research firm Height Capital Markets. "This is a policy that maintains access to an innovative drug rather than putting downward pressure on drug prices."

Getting the change was a major priority for Omeros and its chief executive, Gregory Demopulos.

"Our frustration, shared by physicians nationwide, remains patients' restricted access to Omidria following its pass-through expiration on Jan. 1," Demopulos said in a recent news release about the company's financial performance. "Congressional and administrative efforts are ongoing, and we look forward to resolving this issue soon."

"Pass-through" is the technical term for the Medicare payment status that Omidria had lost. Pass-through allows Medicare reimbursement for the full cost of the drug, rather than packaging it with the cataract procedure. That creates an incentive for hospitals to use the drug instead of a lower-price substitute.

Information for this article was contributed by Matthew Perrone of The Associated Press.