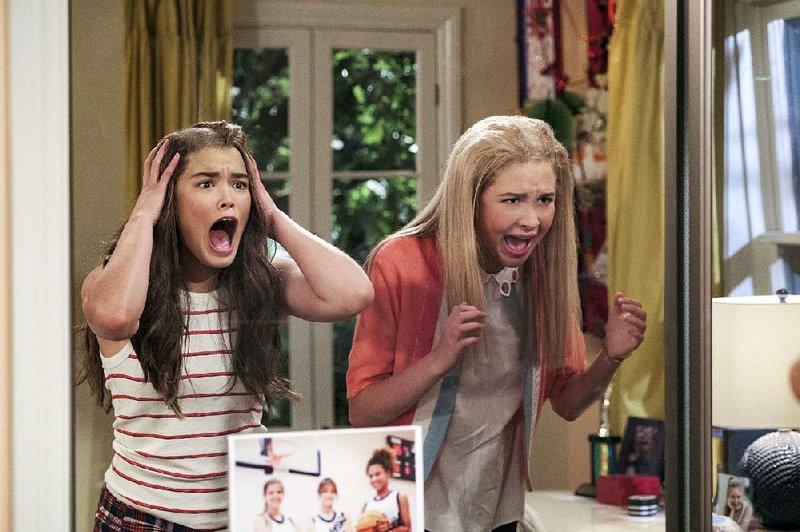 The new Netflix comedy Alexa & Katie stars Paris Berelc (left) and Isabel May as best friends about to start the adventure of their freshman year in high school.

If you ever wondered what the kids are watching these days, just check Netflix. Here's your chance to be the cool aunt or uncle by getting in on the ground floor of a promising new series.

Alexa & Katie begins streaming Friday with all 13 episodes ready to binge. The Twittersphere will be abuzz long before you wake up Friday.

Alexa & Katie chatter will also be all over Snapchat, Instagram, Tumblr and several other social network apps of which I'm totally ignorant. I'll give my fellow baby boomers bonus points if they can simply find the comedy on Netflix.

The two are best friends who are bouncing off the wall with anticipation over starting their freshman year of high school. There is one serious complication -- Alexa is undergoing cancer treatment. But "friendship is the best medicine."

Despite that challenge, Alexa's bubbly personality and love of life never waiver, primarily because her "loyal, quirky, and awkwardly adorable" BFF Katie is right there by her side.

Expect all the usual teen angst about FOMO (fear of missing out) at an age when the primary concern is fitting in.

At any rate, the real star of the series is friendship, with the characters being role models for modern-day female friendships.

Bonus: Tossed in as a nod to slightly older viewers is 44-year-old Tiffani Thiessen (the artist formerly known as Tiffani Amber Thiessen), who starred as Kelly Kapowski in Saved by the Bell. She plays Lori Mendoza, Alexa's loving and protective mother.

There will be awards in 14 categories ranging from favorite movie to favorite musical YouTube creator. If you want to be hip with the kids, you have to be up on your YouTube stars.

As favorite TV show, the kids will choose among The Big Bang Theory; The Flash; Fuller House; Henry Danger; K.C. Undercover; Power Rangers Ninja Steel; Stranger Things; and The Thundermans. Are any of these among your favorites?

• The Son has gotten the call for a 10-episode second season on AMC, proving there is continued life after James Bond for 64-year-old Pierce Brosnan.

The Western stars the former 007 as Eli McCullough, a Texas cattle baron shifting interests to the nascent oil industry in the early 20th century.

The series is based on Philipp Meyer's best-seller of the same name and is a multi-generational tale about the rise and fall of the McCullough clan.

Season 2, set for midyear, will find Eli taking on "a powerful business interest" that threatens all he holds dear.

We'll have flashbacks to 1851 when young Eli was a respected Comanche warrior, and we'll zip ahead to 1988 to witness 85-year-old Jeanne Anne McCullough (Lois Smith, Lady Bird)) forced to deal with an old family secret.

Season 1 was uneven and received mixed reviews. It still managed to average 2.3 million viewers once you tallied DVR and On Demand views.

• No-brainers. If there's one adage in the TV biz, it's don't mess with success. With that in mind, ABC has announced it has picked up new seasons of four "alternative" series. Three of them are immensely popular; the jury is still out on the fourth.

Note that "alternative" is what we used to call "reality" shows. That's because there's precious little actual "reality" in many reality shows. What with creative editing and suggested talking points in so-called "unscripted" shows, reality is often the first thing to vanish.

It will be the 29th season for America's Funniest Home Videos. Alfonso Ribeiro returns as host. Featuring crotch hits, face-plants, epic fails, cute kids and puppies, the family-friendly AFV is the longest-running prime-time entertainment show in the history of ABC.

It's Season 27 for Dancing With the Stars with hosts Tom Bergeron and Erin Andrews. Somehow, the show never runs out of C-list stars trying to impress us with their terpsichorean talents.

It'll be Season 23 for The Bachelor, a series that soldiers on despite itself, proving Newton Minow was right.

And it's Season 2 for Child Support with host Fred Savage and star Ricky Gervais. There are adults answering a 10-question quiz, and five kids who can "save" the adults and, well, it gets complicated, but the kids are cute.