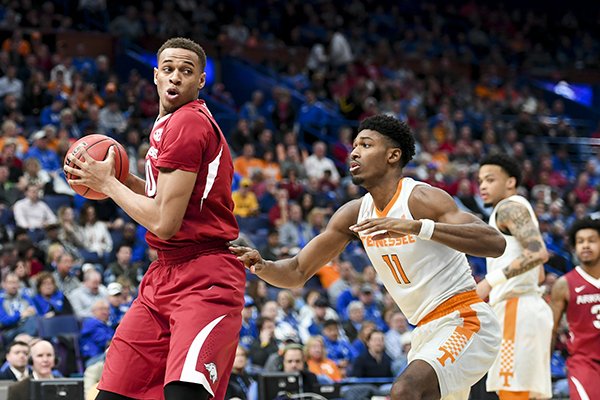 Tennessee had an unbelievable first half, powering to a 48-29 lead and coasting home with an 84-66 win over the University of Arkansas, Fayetteville. The Vols now will face Kentucky for the SEC Tournament championship.

No excuses for the Razorbacks, who were coming off an emotional win over No. 3 seed Florida on Friday night, just 16 hours earlier. The matchup zone and man defense that baffled the Gators did nothing to the Volunteers.

The Vols were 19 of 25 on first-half field goals, 7 of 8 on threes, and the inside-outside attack was just too much for the Razorbacks to overcome, although they battled until the very end.

There was no doubt playing their third game in about 40 hours took its toll on the Hogs, but that's what happens when you don't beat Missouri on the road and drop from a No. 4 seed and a game on Friday to a No. 6 seed and playing on Thursday.

There is no perfect bracket for 14 teams and a five-day tournament, but playing back-to-back games at 8:40 p.m. and then coming back at 2:30 p.m. on the third day is hard.

Mostly, the Vols were just much better Saturday.

The good news for the Razorbacks is the loss shouldn't hurt their seeding when the NCAA Tournament bracket is announced today.

The Hogs started the day with an RPI of 27, and getting beat by the team that has the SEC's best RPI, 8, shouldn't hurt.

The NCAA says margin of victory doesn't matter, and the Hogs split with the Vols this season, so whatever seed the Hogs had Saturday should remain today.

The selection committee looks at many things, including how a team did against teams that are lumped by the RPI into quadrants 1 through 4.

In the world of dot.com bracketology, the Hogs are a solid No. 6 seed today.

CBSsports.com has the Razorbacks traveling to Dallas (that works!!!) to play Loyola-Chicago, with the winner advancing to play the winner of Michigan and New Mexico.

That's not a great draw. Loyola-Chicago is coached by Porter Moser, who won 54 games in three years at the University of Arkansas at Little Rock from 2000-2003, and he has put together a team that was good enough to go to Florida and win earlier in the season.

ESPN.com has the Hogs traveling to Wichita (second best site for the Razorback Nation) to take on either Arizona State or Texas, which could pit two longtime Southwest Conference rivals.

Jerry Palm, CBSsports.com, and Joe Lunardi, ESPN.com, are both really good at predicting the bracket, especially the 68 teams that make the field, but they aren't perfect. Lunardi has changed his site for the Hogs at almost every meal.

But a 23-11 season and No. 27 RPI should bring the Razorbacks enough respect to get a regional game.

Palm and Lunardi both have the SEC getting eight teams in the field, which would be a new record by two teams, and that speaks well for the league. Just like the regular season, the SEC Tournament showed it isn't just a football league.